Atypical custom for the biker smile

Who knows Leonart? Unrelated to the slightest smile … The Spanish brand is known for its custom and bobber-inspired models in small displacement, limited mainly to 125 cm3 (there is a 350 cm2 model) and for a reasonable price, failing that not to be expensive, especially since production returned to Spain with a level of quality returned to normal. Pilder, Daytona, Bobber, Spyder models, only the Daytona is distributed in France … but all the models are on the same basis and the same frame which in fact houses a Piaggio engine, the same as that fitted to the Derbi Mulhacen . On the other hand, farewell to the byclindre of the old Daytona and welcome to the single cylinder. So, what to think of this new vintage? Test… 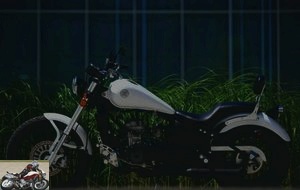 The custom is often reserved for an elite, most of the time requiring a motorcycle license. With a small displacement of 125 cm3, the Daytona therefore opens up the world of the pleasure of riding for car licenses (with the 7 hours of compulsory driving). And to see it, it imposes its size at first glance. A passer-by stops by the way: "what is the displacement?". 125 cm3 … Ah good … and we note the astonished look of the one who expected much more. Admittedly, the engine is not huge, but even it makes it a little more than its displacement. As for the rest, we appreciate a tank with an oblong and elegant shape, extended by a double saddle ending in the rear fender. Large front wheel and respectable rear flange, especially in terms of engine capacity, complete the picture of a homogeneous motorcycle with double exhaust, a legacy of its vanished twin. The round front headlight fits well with the line and the whole thing almost gives the impression of having a big one. 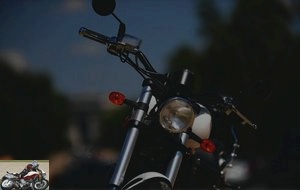 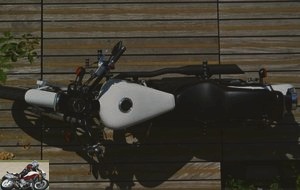 With a saddle height limited to 600mm, even a 1.55 rider will put his feet firmly on the ground. The arms then stretch forward, as well as the feet for a very custom-style position. Even most US models are not as stretched for the pilot. The feet diverge slightly in width, resting on chromed footrests carved in the mass. We just regret the shiny plastics of the commodos which deserve to be at the same level of quality as the footrests. Far in front of the eyes, the speedometer is reduced to its simplest expression with an analogue speedometer and totalizer, without any digital display: return to the sources of simplicity. 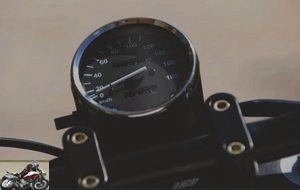 The 4T single cylinder snorts with a rather pleasant sound, which can be further improved with the removal of the valve closing the second exhaust. It remains a 125 cm3 but it is not a rattling noise and it is not discreet either. First and the reaction to the throttle is instantaneous for a voluntary increase in speed. In fact, you don’t have to change gears too quickly. And that’s good, because the times on the interim reports are not dazzling. 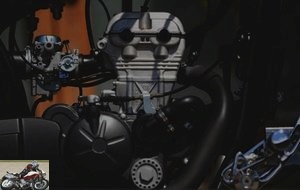 The Daytona is a custom, moreover is almost extreme with its driving position. Originally, the turning radius is limited, but with the feet apart and forward and the arms outstretched, it does not help to turn in a pocket square. However, the light weight of the machine and the feet firmly on the ground, make it easy to steer, even when stationary. And as long as you don’t want to systematically slalom from one lane to another, the Daytona goes very well between cars, with mirrors passing perfectly below those of the trucks.. 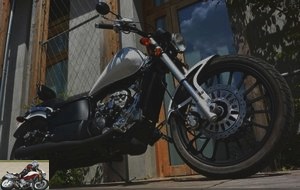 The Daytona enters the motorway at 80 km / h at the breaker in 4, then at 100 km in 5 and finally at 120 km / h at full six … at the same time as the red zone. Despite its light weight, its caster angle ensures good stability. The speed is not high enough to generate a particular weight on the neck and therefore allows you to cruise quietly at this speed.

Obviously, with a peak at 120 km / h (110 km / h real), the single-cylinder is found more at ease on small roads, thus avoiding over-revs. These are the virolos that will slow down the velocity of its pilot, mainly related to the driving position, arms and legs apart and forward which do not facilitate a fluff with friends. But is it really the spirit of the machine or on the contrary, doesn’t its spirit lie in the essence of custom, consisting in enjoying the atmosphere and the pleasure of riding?. 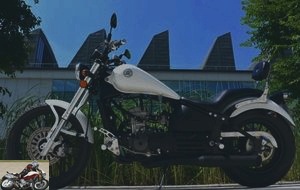 With its double disc front and rear disc, the Daytona brakes well, very well, strongly. The braking is even largely oversized compared to the machine; it must be said that it is the same as that present on the model in 350 cm3 version. Suddenly, on the 125, we get an excellent feeling, associated with excellent power. Day to day it is easy to lock the front or rear, especially since there is no ABS. Fortunately, in either case, the Daytona behaves very well and does not induce any parasitic or destabilizing behavior during a blockage.. 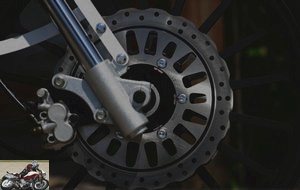 It’s a custom … which in principle often reduces comfort. The saddle shows a little thickness but the construction of the frame with the shock absorber mounted almost horizontally does not facilitate its operation. In the end, the comfort is quite spartan and the rise of the defects of the pavement quite straightforward in the lower back. 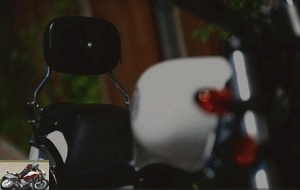 A custom has no practicality. No room for the saddle or luggage rack. When you buy a custom or a sports car, it is not for a utility but to have a rewarding machine on which you can have fun.. 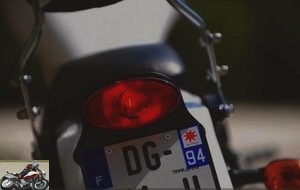 The return of the Daytona signals the qualitative return of Leonart, which now manufactures its motorcycles in Spain with newfound quality. Enhancing, elegant, the model allows you to engage in the pleasure of ride and custom for bucolic rides, without having to pass the motorcycle license and all with a model that has everything a big one. Only the price at 4.499 will possibly make the potential future rider think twice..