The XVS Midnight Star is the 2007 evolution of the old Dragstar, the custom Yamaha, clearly designed for the American market. With a large 1304 cm3 V-Twin, the new Star displays the latest technologies: liquid cooling, belt transmission, 298 mm disc brakes…. Available in 900, 1300 and 1900 cm3, the 1300 version is the mid-range within the brand with 3 tuning forks but has nothing to envy on paper to its sisters. So, luxury cruiser or sub-version facing the 1500 and 1700 cm3 of Japanese competition without naming the Milwaukee brand ? 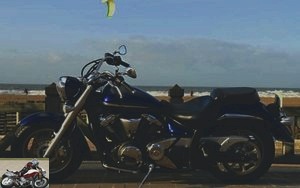 The Midnight Star has all of an American style, blending the chrome of the headlight cowl with the rear turn signal support to frame a huge central V-Twin with chrome cylinder heads mounted on a black-tinted engine. Everything is tasteful and well finished. 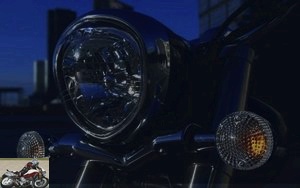 Approaching you immediately notice the wide, low saddle, which could accommodate an elephant compared to usual. The huge belt comes out nicely and changes compared to conventional chains. The shock absorber, hidden, is completely forgotten. Huge tubular side exhaust finishes off a ubiquitous engine. 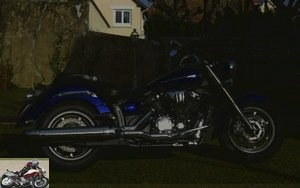 Literally placed on the handlebars, the analog meter stands out immediately before the eyes, if only by its half-oval, half-rectangular shape. There is just in the center a unique digital screen, simply displaying the trip. No superfluous here: just a speedometer and 4 warning lights for neutral, indicators, engine temperature and full headlight. 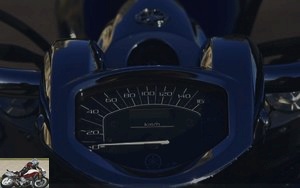 Once the huge saddle is climbed, the feet are flat, even for a small rider. 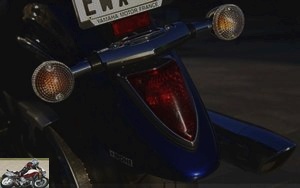 The arms wide apart catch the handlebars, limit cow horn. Sitting low, your arms are almost high. For large sizes, it is necessary to make the back round. The knees go up a little – even more for large sizes – and enclose the tank, while the thighs rest largely on the saddle. The XVS gives the impression of being picked up on it and one with its rider, quickly building confidence.

The 60 ° V-Twin snorts in a discreet high-pitched sound. The mirrors placed well in width offer a good vision without vibration.

It seems easy and light, even for a small size, despite its 303 kilos all full.. 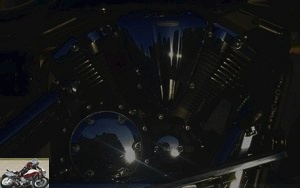 First…. You don’t have to turn the handle for the Star to start vigorously, almost sharply. We thought we’d come across a small, docile custom, but the XVS turns out to be dynamic, even nervous…. despite its "only" 72 horsepower. Suddenly, the first requires handling the clutch to gain smoothness.

With a center of gravity close to the ground, the XVS proves to be very manoeuvrable in town, while its small size allows it to slip easily between the lines. The flat feet also allow all maneuvers at very low speed, or even at a standstill. You just have to push the handlebars a little and the bike will happily tilt. In fact, even the novice rider quickly gains confidence on his handlebars…. to rub the toe clips from the next roundabout. Because like almost any self-respecting custom, the ground clearance is low and the footrest plates located low. So you don’t have to put in a lot of effort to rub lightly. But even in these cases, the Midnight Star defends itself well and remains controllable without hazardous behavior. And yet, the Yam is far from having the lowest ground clearance of customs and allows more angle than most cruisers.

The pick-ups are really sharp in the first gears, while the first is happy to go up to 80 km / h. The engine allows you to change gears anyway and have excellent times in the city. 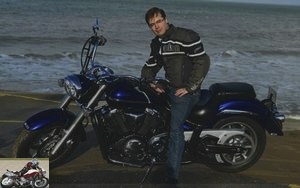 The Star sets off strongly on the motorway, when at 130 km / h it is only at bottom 2! The 3rd goes without difficulty to reach 150 km / h while each following speed allows to gain 20 km / h additional. But it’s the pilot who gives up control after a few minutes. Because beyond the speeds authorized in France, the driver looks like a flag blowing in the wind; the arms pull and the head unscrews; the legs are difficult to hold against the tank. In fact, it is this model that you have to drive to understand the expression of the extended arms. The position increases the effort required, greater than a naked roadster at the same speed. 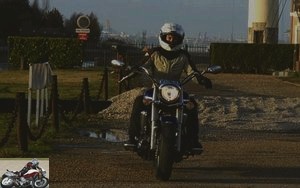 The XVS 1300 is revealed on departmental roads. Capable of wrapping up torque on last gear like a big custom, it is also capable of playing on first gear by delivering real, dynamic and rewarding pickups. Suddenly, it offers two faces…. that of the custom that can run on torque and that of a nervous machine pleasant also to play from one turn to another. Depending on the mood and desire, it is thus possible to change the way you drive…. with simplicity and an obvious goodwill on the part of the XVS to comply with the wishes of its pilot.

On the other hand, if the pace really picks up, the footrests start to touch…. slower than many customs but faster than a roadster. However, apart from the surprise of the first "scrapings", the Yamaha remains healthy and unsurprising, allowing for a rhythm that has nothing left flowing.. 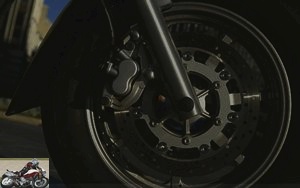 The 298mm disc brakes, single at the front, double at the rear, perform their role perfectly by providing the good feeling and the power to stop the machine quickly and easily.. 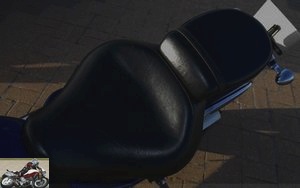 The huge saddle offers a good, rather comfortable seat for the pilot. The passenger is worse off with a folding seat without a handle or backrest … to be reserved for very small passengers. In which case, this famous folding seat is surprisingly almost comfortable.

Consumption during the test was between 5.1 and 5.9 liters, depending on the speed of travel, in particular at a stable speed on a departmental road. With its 18.5-liter tank, the XVS Midnight Star thus offers an average range of over 300 kilometers, despite a reserve tending to light up around 220-230 kilometers.. 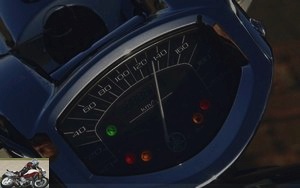 No room under the saddle, no original panniers; the rear folding seat does not allow anything to be stowed. The tank without a prominent cap, however, allows a saddlebag to be attached. which will then hide the meter. 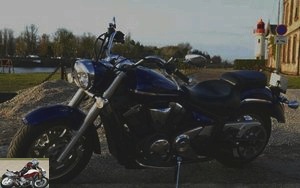 The XVS 1300 Midnight Star is a real eye-opener. Far from being a big custom compared to models over 1700 cm3, or even 1900 or 2300 cm2, it is a good lively and dynamic custom, which will delight even the smallest riders by its ease of handling. . The female riders who had never driven a custom but rather roadsters or sports cars simply fell in love with it and didn’t want to let go, especially compared to the heavier and massive VN1700 in comparison. Real bikers will not despise it because it really offers performance and everyday driving comfort with real sensations. Only large sizes will suffer from the folded position that this model requires from day to day. And at just 10,000 euros, that’s practically a bargain for the category…. Even if the custom is a very small market for France, this model could make adopt the bike by many women, including beginners, with enough fishing to guarantee the pleasure in the long term..