Instant torque equivalent to that of the biggest sports cars

Electric, motorcycle … two conflicting words for most bikers. What can be electric: a mixer, a scooter, a scooter, a bicycle, possibly a car, but not a motorcycle, oh, sacrilege. And yet, electric has never been so popular, with developments from all the major global car manufacturers and the explosion of scooter rental services in major European cities, from Berlin to Paris. As for Zero Motorcycles, for twelve years they have been developing models, expanding the range, their network with more than 100 dealerships, but also the main factors against electric: power, range and charging possibilities.. 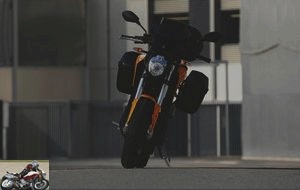 For the possibilities of recharging, the Zero Motorcycles are recharged on a socket all that is more standard, the choice in the garage or by a wire falling from the living room to the sidewalk. In short, you can recharge anywhere, even by asking for a coffee while drinking your little black. For autonomy, Zero Motorcyles announces more than 350 kilometers for its 2018 models and the 2017 models already offer between 180 and 200 kilometers on average. What to do already more than the urban to consider a weekend in the countryside. As for the power, admittedly often only 70 horses, it should be forgotten, because the torque is phenomenal and instantaneous, superior to that of a Ducati XDiavel to give an idea! Better still, they are accessible to the A1 license or even B license for more than 2 years with training in their 11 Kw version! So, what to take the step? We have already tried the trail model, DSR. Roadster S test. 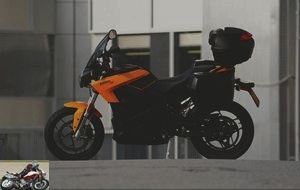 Two wheels, a handlebar, a saddle, headlights, a frame that we enclose, a line … it is undeniably a motorcycle. And when you are seated on it, everything is like a traditional motorcycle, including with a dashboard here entirely digital. On the other hand, those who like engines and their shapes from the cylinder head to the crankcase with the exhausts under the saddle will be disappointed. Nothing like that here. For the rest, we are within the standards of the genre. Note a chest at the usual location of the tank, to which we can add suitcases and top-case, which in no way disfigure the machine. On the contrary, it undoubtedly reinforces its motorcycle versus scooter aspect. The finish is up to date and up to market standards. 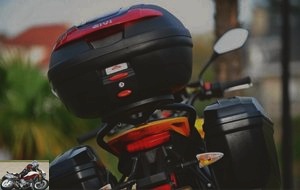 The roadster offers a natural position, tilted slightly forward without exaggeration. The triangle offered by handlebars, saddle and feet is natural. In the absence of a large tank, the legs grip the bike well. 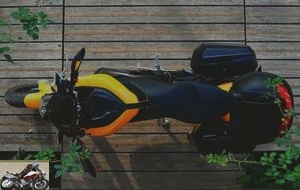 In front of you, a fully digital dashboard focuses first on the level of charge and autonomy … then we find the various traditional indications, speed, partial double trip, totalizer, clock as well as the mode. driving. Because yes, Zero Motorcyles has its ride-by-wire, with three modes: eco, sport and custom. The custom is not to behave like a custom but simply means that you can perfectly configure the engine according to your desires in a specific way, for the way of delivering torque and power according to your own criteria.. 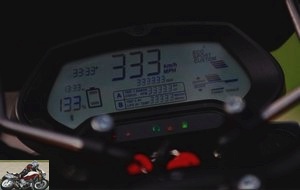 Red or green light? Because in contact, we hear nothing. On the other hand, if the light is green and the handle is turned, the reaction is instantaneous. What to put one without paying attention. Fortunately, there is the eco mode. And there, frankly, difficult to put one precisely. 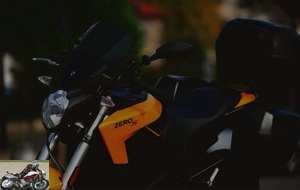 The major feature of electric models is the delivery of torque and maximum power instantly. It’s really the big difference with the thermal. Imagine a motorcycle where the simple touch of the handle immediately propels you to the maximum possible? Even some 50cc equivalent electric scooters are actually unpleasant because of this: it feels like you’re on a rocking horse, in on / off mode all the time. Nothing like this with the Zero Motorcycles and even less in eco mode. In fact, in eco mode, it is even soft, as if the motorcycle was pulling long. We turn the handle and start slowly before picking up speed. This is the economical setting, which saves the battery as much as possible, to the detriment of behavior. Sure, it’s economical, but it’s boring to death, even if you can reach the 113 km / h peak in this mode. So, we immediately go to sport mode. Ah! Finally. You turn the handle and it reacts instantly but more like a sports car than a mid-capacity roadster. here pulses, here sends the block and in town, one finds oneself immediately at illegal speeds likely to make fly the permit. As much in eco mode, braking was also done with the engine, here, nothing of the kind and the braking are also more powerful and less progressive. In short, you take the machine in hand in eco mode the first time and you go to the first block in sport mode to never leave it.. 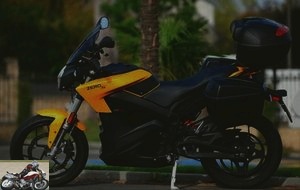 In eco mode, you will get burned at a red light by the 125. We will therefore prefer the sport mode to eject from the white line until the next traffic light. It’s much more fun. Thin and light, the motorcycle therefore weaves its way through traffic with ease, without ever being hampered by the mirrors of motorists and trucks. 10/10 therefore in terms of ease of interfiling. Its headlight shines as well as a thermal model, so if we can’t be heard (no Akra pot here), we are well seen. The lighting is also effective at night. We regret on the other hand a wide turning radius, which will avoid gymkhana between stationary cars. For the rest, it’s velvet and you can hear the friction of the tires on the asphalt; quite disconcerting at first but pleasant. At least we don’t have enough of it. As for the weight "all full facts" at 188 kilos, it offers the lightness of a mid-size model. We can therefore easily evolve even at very low speed, completely forgetting the weight. You could even say that it is closer to a 160 kilo model than to 190 in terms of handling impressions.. 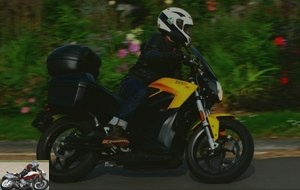 Lightweight and easy to handle

The roadster sets off naturally on the motorway. If it is limited to 113 km / h counter in eco mode, press while driving in sport mode and the motorcycle sets off dynamically to reach 153 km / h counter, i.e. a good 140 km / h real, already likely to slam a radar. It’s a roadster, so we will avoid talking about wind protection, but we could almost drive quietly at this speed, with less earplugs and watching the gauge go down faster, with a range closer to 120 kilometers. than 180 in town. Once again, the 2018 vintages bring something better to this level; in particular with a fast charge possible allowing to regain 95% of the charge in less than an hour. But to go far, it is better to spare your mount and to maximize the autonomy for the weekend in the countryside, it is better to take the cross roads. 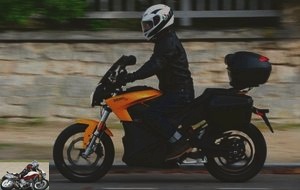 You can really have fun with this bike on small roads, but also on the roads, with less scruples than with a heat engine. At least no one can hear you. But with potato and an accessible ease of driving, we chained quietly or on the contrary dynamically the virolos. If the front seems a little heavy at first glance, you learn to counterbalance a little more to take it into a bend and it goes, quickly and well..

Braking is effective, with ABS present without being intrusive, however, capable of triggering in the dry at the rear. 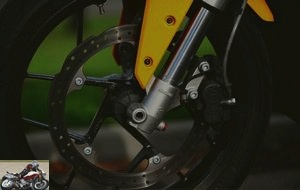 There is not much room in the back, but the addition of a top case definitely improves things, especially with the acceleration possible in Sport mode. Care must be taken to ensure that the latter is not mounted too close, however, at the risk of forcing the passenger to be too close to the pilot.. 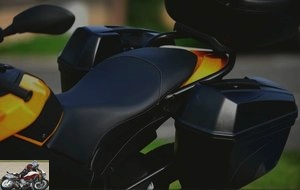 In town, in sport mode, this 13 Kw model loses about 10% every 20 km. As the range estimate takes into account the previous use, I had even taken it at 100% when it displayed 135 km and in eco mode, it rose to 180 km, while I had driven 20 km with already. You then get into the habit of recharging it when you arrive, without waiting to arrive with dry electricity. Just remove the plug on the side to connect it to the mains. Without tank charge, full charge takes eight hours; in an hour with a fast charger. Having a coffee now allows you to gain 50km of autonomy. In one hour of charging, we gain 137 km more autonomy.

The 2018 vintage, now in 14 kW, announces 350 kilometers of autonomy in the city. Even if it is a maximum value, a guarantee that we have reached an effective maturity in terms of autonomy.

Depending on the electric subscription, a full costs around 1.5 euros, or about 20 times less than a thermal equivalent. This explains why despite a higher purchase price than a thermal model, savings increase with the number of kilometers traveled.. 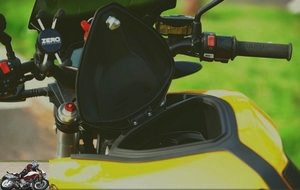 Trunk in the fake tank at the front

The tank that contains a chest! We do not put a helmet, even jet on the other hand. But it allows to put a reflex or a few races. And then suitcases and top case in no way spoil the line, on the contrary and allow to exceed the capacity of the largest scooters. 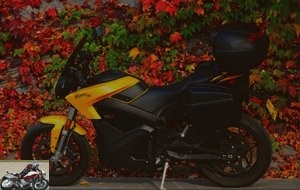 No vibrations, no noise … which is the soul of a motorcycle for many. On the other hand, the sensations of acceleration are there and everyone is dropped off at the red light and even after. A character that can be more on / off, even more linear, but which can be controlled with its mobile application with its smartphone to give it the character that we actually want. It is now more nervous than many motorcycles of average displacement and it is not stingy in sensations, without forgetting an autonomy equivalent to the majority of motorcycles. The chargers starting to arrive at the service station (timidly ok), we can even consider real journeys in electric. The price remains, starting from 12,590 euros (in 11 Kw) but climbing to more than 16,120 euros (in 14.4 Kw). We retort that maintenance is then much less expensive in electric than with a thermal, not only because of the fuel economy, but also at the level of the tires or quite simply lighter and easier revisions..