The TGV (High Speed ​​Tourism) according to MV Agusta

A motorcycle completely redesigned for tourism and equipped with real saddlebags.

MV Agusta continues to expand its range and now offers machines with a more tourist vocation. More successful than the Stradale, the Turismo Veloce sees further. We discovered it in the PACA region and it was a pleasant surprise. 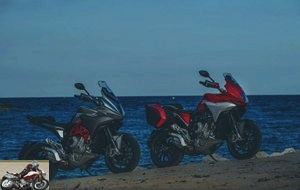 Aesthetically speaking, we identify an MV Agusta at first glance, even if its proportions differ somewhat from Italian sports cars. Higher screen, large suspension travel and a pair of saddlebags, large enough to each accommodate a full-face helmet, have an unusual presence. But the DNA is there, with a front headlight (LED) in the characteristic African mask shapes, a superb rear single-sided arm, a solid inverted fork with Brembo radial brakes and of course the three-cylinder and its low quadrangular outputs. It is indeed an MV that is in front of us and every detail confirms it, because precisely at MV, the details are not…. Everything is neat, drawn, designed and made with care. Mistakes of taste are rare and gazing at the bike is a real pleasure, as everything has been done to make it beautiful. Its light signature is superb, particularly in warning. The LED indicators are also very successful. Even the license plate holder is beautiful ! 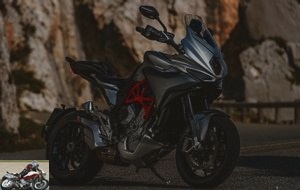 For MV, the objective of this model is to open the brand to a market larger than that of sports cars, to reach a wider and different clientele. The stakes are high because it is on this diversification that the future of the manufacturer rests, which relies on greater distribution to amortize the heavy investments of recent years. Now supported by Mercedes AMG which owns 25% of the capital, MV Agusta sees bigger and above all further. 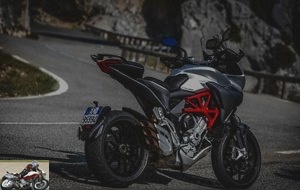 Perched at 850 mm in height, the Saddle is rather high for the category, but as its front part is narrow, a pilot of less than 1.70 m easily puts the 2 tips of the feet on the ground. 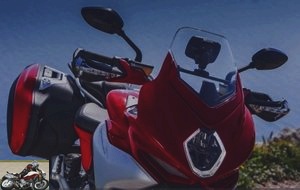 As soon as you straighten it up, you can tell the bike is light, despite the 22 L of gasoline on board. MV claims 191 kg dry, which would be around 210 kg with full tank, if they don’t cheat. This is the weight of an MT 09, of comparable displacement and size. In the category, we experienced much heavier and much more difficult to straighten. Once in the saddle, we discover a nicely designed 5-inch TFT instrument panel capable of providing a wealth of information. That’s kind of the problem, because there are a lot of them and it’s written small. Not necessarily easy to read everything while driving. On the other hand, the settings menus are rather user-friendly and configurable while driving. We have already told you about the multiple possibilities of MV electronics, so we will not go into them in detail. Note that in addition to these functions, the dashboard has a gauge, advertised as accurate, two trips, plus another that shows the distance traveled since the start and the average speed. Exterior temperature, engine temperature, time, are also permanently displayed, but there is no indication of consumption. 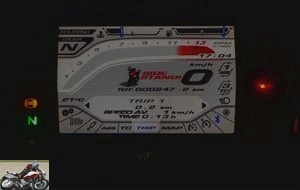 The mirrors are well placed and “mirror well”. Let’s go ?

The flexibility of the reworked engine works wonders. You can slow down on almost any gear! Knowing that it takes 11,700 rpm, that makes a great range of use. In addition it has a really nice sound this three cylinder. But this idyllic picture is marred a bit by the clutch, for lack of an unsuitable supplier. MV is in the process of replacing him. Too much play in the bell generates unpleasant vibrations and a not very orthodox noise, at idle in neutral and in gear up to 2500 rpm. The slippage is also difficult to regulate and the hydraulic control is a little harsh. In short, the clutch is doing its job when everything is otherwise fine. Too bad, certainly, but temporary since the new parts will eliminate this little hassle. The first would have benefited from being shorter to facilitate starts, especially on hills and duets, but here we quibble. 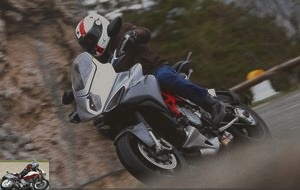 Advantage of the low output, the bags are of a large volume (30L each), but not too wide and especially less wide than the handlebars. It facilitates inter-lane driving and it can avoid a dip in the port of the Ile de Re, for example…. The overall width of the bike is 900 mm, which is 80 less than a Multistrada. It counts in urban use. Last but not least, the bike shows excellent balance which favors very low speed movements without putting the foot on the ground. It’s devilishly nice to squeeze in, or to go slowly while waiting for a traffic light to turn green. Positive assessment therefore for this first round. 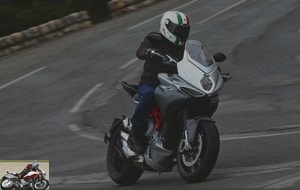 Here, the Turismo Veloce reveals all its agility. We have already told you about its low weight and its contained size. Added to this is a short wheelbase and good geometry that make the bike easy and fun to ride. It swings naturally, follows the trajectory without requiring effort from its pilot. The very natural driving position is restful. The engine itself is enchanting, much more than the Stradale which is in fact just a Rivale with a different mapping. The flexibility and availability of the Turismo Veloce are incomparable. It’s rounder, fuller, tastier and still with a huge range of use. A success and an enchanting sound, because it rarely goes below 2500 rpm, in the noise zone mentioned above. We also take full advantage of the shifter which works both uphill and downhill. This avoids having to use the clutch, but we regret a somewhat firm selection of gear ratios. Our test having lasted only 220 km, we tested the different modes of mapping, but without much conviction we admit it. The response of the throttle having improved enormously compared to the first 675 F3, we do without this accessory quite easily. The traction control set at 4/8 is hardly intrusive…. nor really effective at this stage, because the engine torque allowed us a good glide on the painted markings on the ground. But since it is adjustable, we will say nothing about it, it was probably enough to set it louder. A rather laudatory second round then again…. 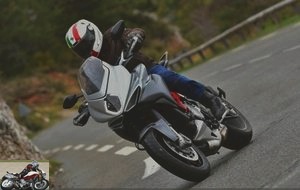 As the speed increases, we discover a perfectible protection. Of course, the screen can be raised manually to 60 mm in height and with just one hand, as long as you do not have a GPS. If it is present, it is doable, but more delicate. Despite this, the upper body, head and shoulders, did not seem to us to be the best protected. Because we don’t have to drive for a long time on the motorway, we won’t say more, but there is more efficiency in the category. The shapes and finesse of the beautiful Turismo Veloce reach their limits here. A taller and wider bubble option for large riders is under consideration, which confirms our assertion. The engine is still as enchanting as ever. At 130 it turns nicely at 6100 rpm and asks only to climb towards the red zone. We only made a small peak at close to 190 km / h, but the stability seemed imperative to us and the engine still showed good resources to go further. 110 horsepower is more than enough, especially when available like this. A third round penalized by perfectible protection, but the Turismo Veloce is doing quite well for a beginner. Nothing to do with his cousin the Stradale who wants to look, but doesn’t have the song when it comes to traveling. According to an engineer of the brand, the Stradale is only a "short commuter", that is to say, designed for short distances. Turismo Veloce really sees further ahead ! 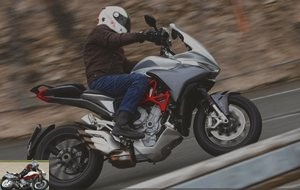 There we announce “stuff”, beautiful, good, net (Dubonnet for the oldest….) It grips well and strong, with bite, power and discreet ABS, but which is not configured for act on a curve. Pity. The rear is efficient and measurable. We border on faultless ! 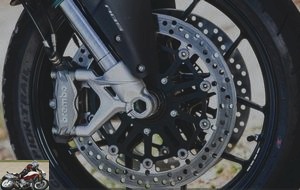 Ouch, here it is a bit of a disappointment, because at the end of the day, the saddle seemed hard to us. It was time to go home after 220 km, the pains would start to set in. Smaller builders will be able to move, taller ones will lack space to relieve their buttocks. A comfort saddle should arrive in the options catalog. We can bet that it will lean less forward, because in the long run it is embarrassing. But the behavior of the suspensions was more problematic. Poorly damped, with springs probably too hard and therefore little preloaded to limit breakage, they had a functioning that could be improved, to say the least. Unfortunately neither we nor the staff were allowed to touch it. Too bad, because the fork is adjustable in compression and rebound and the shock absorber in rebound…. There was definitely a way to do a lot better with just a few clicks. We can bet that the manufacturer will hear our unanimous criticism and adopt a more suitable basic setting. Otherwise, you will have to look into it yourself, with a little doubt about the quality of the Sachs shock absorber, or opt for the Lusso version and its semi-adaptive suspensions which can be configured as desired, which will arrive at the end of June for an additional € 1,800.. 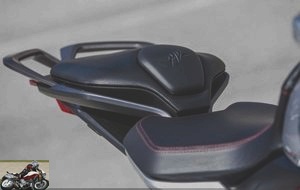 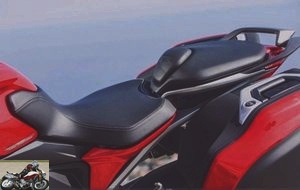 Here again, the Turismo Veloce scores points. In addition to the optional large saddlebags that can be opened with one hand with the same key as the ignition, there are two tiny storage pockets at the front. Hardly enough to put a motorway ticket and a few coins. Anecdotal therefore. On the other hand, we have 2 USB ports, an optional Garmin Zumo 390 GPS and two 12 v 2 amp cigarette lighter sockets on the side. Sufficient to plug in heated clothing for example? Heated grips are optional and hand guards are standard, as is cruise control.

But it is above all in the maintenance area that the Turismo Veloce takes a leap forward. Drain every 15,000 km instead of 6,000. Check valve clearances and replace spark plugs every 30,000 km (previously 12,000 km). Finally, the new engine, revised at the level of the combustion chambers shows an appetite down by 20% compared to the Stradale. With 22 L in the tank, we should therefore have a good autonomy! Finally, be aware that in addition to the basic version, sold for € 15,990, MV offers an "Edition 1" at launch. For € 940 more. It is equipped with suitcases, a central stand, heated grips and GPS as standard! However, there will only be 35 for the whole of France, one per concession. At the same time, you know that there are currently 35 dealers and that MV intends to develop its network quickly, but above all well ! 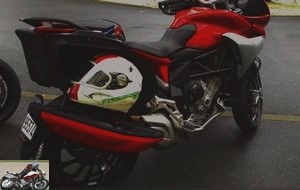 Well done! (well done) as our English friends say. While this test drive is not yet a masterstroke, the Turismo Veloce undeniably shows great potential and opens up new horizons for MV Agusta. It is undoubtedly much more accomplished and traveler than the Stradale. Its small faults will be quickly corrected and we can now travel quickly and far on its handlebars enjoying its agility, while savoring its lines and its engine which evokes that of the MT 09 by its great qualities, despite 50 cm3 less . Admittedly the selling price, 15,990 €, is high, but it is that of an exceptional motorcycle…. simply an MV!

The technical sheet of the MV Agusta Veloce