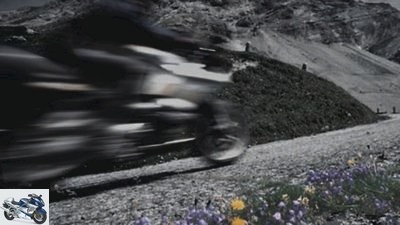 Around the Ortler
Absurd

Anyone who is out and about on the Ortler not only experiences routes and landscapes of the alpine high-end class, but also a piece of human locomotion.

Fussen, Imst, Landeck, another 40 kilometers to Italy. The Fernpass lies behind me, to the south the Reschenpass crosses the main Alpine ridge. As a child I was here with my parents on the way to the Adriatic Sea. And to keep me happy, my father told me about the Romans, who were traveling on almost the same route a good 2000 years ago. Via Claudia Augusta was the name of the street back then.

Some Ducati thunder past, an estimated 100 hp with an empty weight of 200 kilos. Direct descendants of the mule carts and horse-drawn carts that rumbled across the Alps on the said Via Claudia. The route completed by Emperor Claudius in 46/47 AD was five to seven meters wide, led from Augsburg to Venice and was the most important north-south connection across the Alps until the Brenner route was expanded. 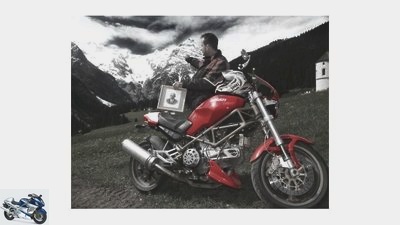 At Landeck the traces of the 1.30 meter high Roman wagon wheels are still visible today. Behind Pfunds the Inn Valley becomes narrow like a gorge, the jagged peaks of the Central Alps come closer. It must have been a real challenge that the Roman road builders faced here. Rocks had to be removed, earth piled up, dams built, tunnels and bridges built. The route was
so perfectly thought out that the modern federal highway still follows the Roman road for large sections. 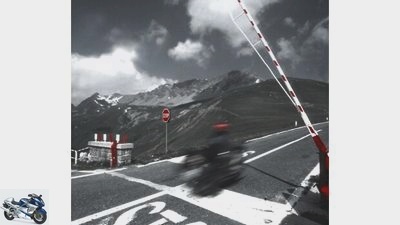 As adventurous as the route over the Alps may have been, the exciting sequence of curves at the Finstermunz Pass was denied to travelers of the ancient world. The Via Claudia Augusta follows the Inn valley to the Altfinstermunz fortress, while I rush on the pass road to Nauders. Almost in close contact with the rock face from which the road was planed. Brilliant. When the fun on the bends is behind me at Nauders, I scour the map for further challenges.

Hardly in the Engadine, less than ten kilometers from Nauders, do I come across a road that must have originally come from Roman times. At least that’s what the rock tunnels supported by wooden beams suggest, which look like ancient mine shafts. But nothing. It was not even a hundred years ago that Switzerland built this daring link to Samnaun. I feel my way into one of the dark tunnels on foot and look through tiny rock hatches down into the crevices. Suddenly it begins to rumble, as if a stone avalanche was going down into the valley outside. But there are only eight Gold Wings that pass by under daylight illumination with different techno, rock and pop sound. 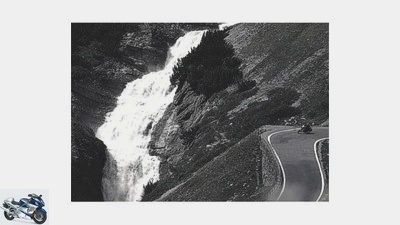 At the end of the adventurous ascent, I come across the mountain village of Samnaun. Duty-free status has made the village idyll into an international hub. Duty Free Center, Duty Free Shopping, Cigarettes, Liquor, Perfume ?? the forest of signs never ends. Bargain hunters storm through the alleys. A little of the original character has remained: between perfumes by Christian Dior and Emporio Armani, there is also marigold essence and marmot balsam.

The Swiss-Austrian border appears, a sharp look penetrates the tank bag, no goods subject to duty, thank you, drive on. The customs officers are on their toes. After all, everyone knows that there is a network of ancient smugglers’ trails in the border triangle between Switzerland, Austria and Italy. In the evening ?? I’m back in Nauders ?? After the second glass of South Tyrolean Cabernet, the innkeeper at Nauderer Hof tells me how he smuggled cattle skins, car tires, sacks full of ball bearings and even herds of cows across the border in the barren time after the Second World War. Over in Italy there was already excellent wine back then? we toast ?? and with the Swiss tobacco and saccharine. Lucrative business on which almost everyone in Nauders, including the mayor, earned extra income.

All about the Ortler (information)

On the Ortler, not only the curves are worthwhile, but also the historical traces. Here are a few suggestions.

Travel time
Only from June to October are the highest alpine crossings such as Stilfser Joch and Timmelsjoch free of snow. In spring and autumn you have to reckon with bad weather there.

Tips for history freaks
You can learn about the life of the indigenous people in the archaeological open-air park “Otzidorf” in Umhausen, phone 0043/5255/50022, www.oetzi-dorf.com, where an alpine school also offers taster courses in bow making, making fires and reading tracks, phone 0043/5264 / 20113. There is a medieval feeling at Landeck Castle from the 13th century, phone 0043/5442/63202, from which a footpath leads to the Flieber Platte and to an originally preserved section of the Via Claudia Augusta. A picturesque stopover is the former Altfinstermunz customs station near Vinadi in the Inn Gorge, which handled all tourist traffic until the 19th century. The Nauders Fortress, which was built between 1836 and 1840 as a road block on Reschenstrasse, shows military equipment. Telephone 0043/5473/87242. Reinhold Messner’s restaurant “Yak und Yeti” in Sulden, phone 0039/0473/613266, offers a Himalayan feeling, a rafting tour in the gorges of the mountain range for adrenaline kicks. Information, for example, from Tommy Schranz in Pfunds, phone 0043/5474/5788, www.interraft.at.