The stealth version of the Monster except the price

Mostro! I still remember the test of my first big bi downshift, having only tried 4 cylinders before! I almost put one ! That was the Mostro in its early days, a big twin, character and feel. 25 years later, the Monster has evolved a lot, in yet another version for this Stealth edition, variation or limited series of the Monster 821 tested when it was released in 2016. But why a stealth edition? For the color black, like Ford! But beyond the color, the Monster 821 Stealth is an exclusive color, an adjustable Kayaba fork, a DQS shifter and a nose screen. That’s all ? Test. 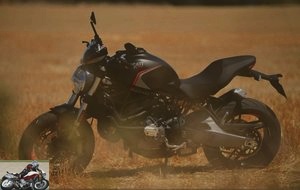 The Monster 821 Stealth is revealed with its matte black color and some additional decorations such as the red stripes on the rims or the 821 on the frame completed by a tank decoration in gray and red. The nose screen provides a little more protection while being consistent with the Stealth edition. We finally find this seat cowl tuned in color. It is both discreet and elegant, Italian style! 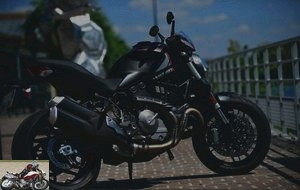 Under the plumage, we find the L-Twin Testastratta 11 ° of 821 cm3 developing 109 horsepower and 86 Nm of torque with braking equipped with Brembo M4-32 radial calipers. 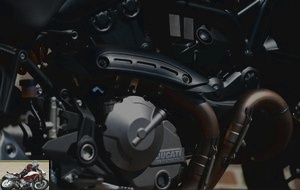 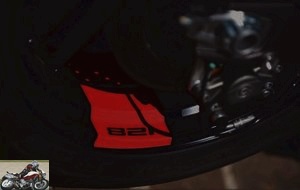 Rim with 821 in black on red stripe background

The pretty LED headlight finally offers good night lighting but above all a nice light signature. 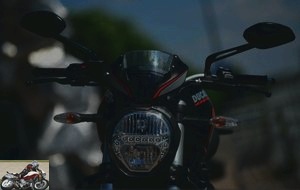 The Monster adapts to the morphology. The saddle height is indeed adjustable, with 25 mm of difference between the two heights (785 and 810 mm), which allows the driver of 1.70 to put his feet almost flat, but finding himself a little sunken in the motorbike. We find a position tilted forward, but not as much as some past models could be..

Under the eyes, we finally find the speedometer or rather the TFT screen with all the information of an on-board computer, accessible from the left stalk which also allows to choose its ride-by-wire mode: city, touring or sport . Each mode includes different settings in terms of ABS, traction control. And like, it’s a TFT screen and the mood of the meter changes depending on the mode. In town, for example, we have a clearly visible clock but no tachometer! The tachometer is in fact only visible in the other two modes. On the other hand, we always have the average and instantaneous consumption, the temperature, the elapsed time, the partial double trip, the totalizer… 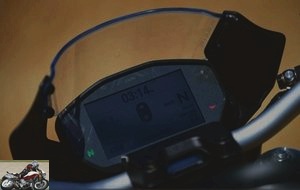 TFT screen, with display depending on the modes

The advantage of TFT screens is that they are easy to read! And this one is no exception to the rule. 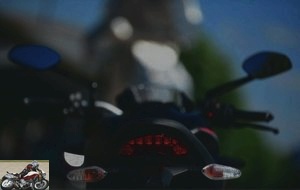 The big twin snorts in a serious way. First, you have to play with the clutch so as not to jerk or even go wheeling. The Monster has not lost its character, far from it. 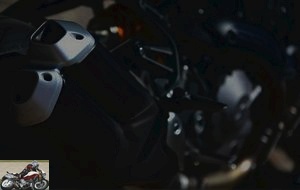 Double escapement with a low melody

Dynamic, even violent, the Monster 821 is at ease from one fire to another, to leap violently and slip easily between the lines. On the other hand, if it sneaks in interlocking, do not ask too much of gymkhana, with a sufficiently large turning radius, which requires a wide street to make a U-turn easily in one go.. 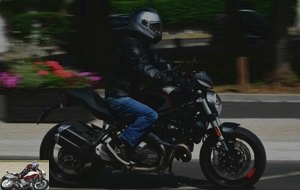 The spirit of Mostro

The bi is flexible compared to what it used to be, but still grumpy. In other words, it is capable of knocking in second gear at 20 km / h. Suddenly, we play a bit of the selector in town, his preferred report being despite everything the second report, to then prefer 4,000 rpm at 50 km / h. Certainly, we can drive at 50 km / h on the last report but it hits hard then. 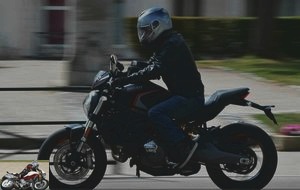 What we especially appreciate in town is the model’s shifter. We forget the obligatory or even painful musculation of the wrist of certain past models and it suffices to engage lightly with a finger to shift gears up and down. it also does so without touching the clutch but it is more violent. And in town, we prefer to be gentler. Moreover, in the city, the sports or touring modes are not used much and the 75 horses of the urban mode are largely sufficient..

It’s a roadster and the nose screen doesn’t change much. At 130 km / h, we are already taking it all in the face. Come on, we can push up to 140 km / h but you will not last long on this type of road. However, the Monster is particularly neutral and the large, fast curves are taken at a sustained pace without any worries. Straight-line stability is just as excellent. 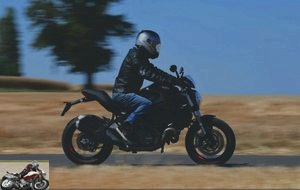 245 km / h possible on circuit, but not on road with non-existent protection

Was it said that the driving position was tilted forward? It allows you to become one with the motorcycle and the Monster turns into a neutral toy. A lightweight toy, moreover. We can pick up the pace without ever being surprised by the behavior, homogeneous and even forgiving, with a clear gain in confidence given by the original Pirelli Rosso III. The power is there, but not too much. There is character without falling into the rodeo, including a second capable of taking you to 100 km / h. But it still remains a bi, even if the downshift is smoother than in the past. 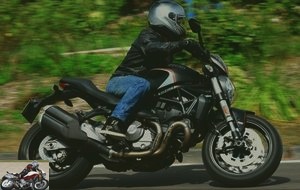 We become one with the motorcycle

It’s a roadster. The passenger seat is anecdotal. This is also the reason why the seat cowl is original. This bike is not made for the duo, or only for short trips. Its motor character encourages nervous driving and there is nothing to keep you going except the pilot. But on heavy braking, it can regularly find itself castrated against the tank. 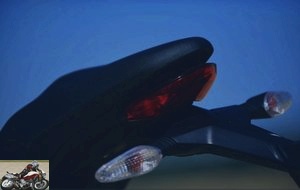 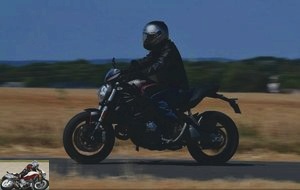 The Monster 821 is equipped with Brembo … but it is not enough to be in Brembo for it to brake. Braking is good, homogeneous, progressive, with a good feeling. But it is not particularly powerful either, especially the rear brake, at the stage of retarder. And suddenly, we think A2 since the machine is accessible to them and we tell ourselves that this braking is ideal for a young license because it can be controlled in all conditions, especially since the ABS only comes into action in the rain and with trapper braking. 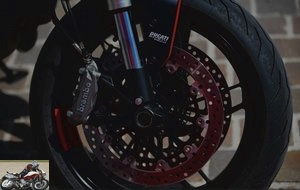 The on-board computer indicated an average consumption of 6 liters per 100 km, with the majority in town. But as we have said, we are sticking to the first reports in town. The pump check confirms consumption at 6.3 l / 100, with a last reserve stick showing at 210 km. But there is still more to offer an overall autonomy of 260 kilometers with the 16.5 liters of the tank.. 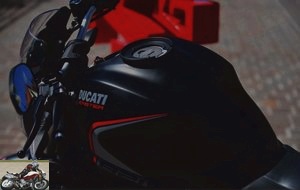 There is a socket under the saddle.

The Ducati Monster test in video

The Monster 821 Stealth is the most successful mid-size Monster since the 696 and it benefits from full shifter ++ and the front fork which corrects its initial behavior under stress. So if you still prefer the red, the Shifter and the Kayaba fork are options to include on the checkbook. It remains its price, high for the category because facing models financially more accessible to young people allowed to start with the MT-07, or even a Street Triple even if the Monster is clearly above a CB 650 for its driving character. and the sensations offered.