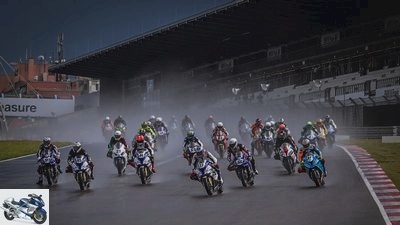 More spectators than last year, winners from three nations and lots of action on and next to the Nurburgring. The new IDM is on the right course.

Despite the usual freak weather on the Nurburgring, the season opener of the International German Championship (IDM) turned into a motorsport festival for drivers and fans. In the IDM Superbike 1000 alone, the top class in Germany’s highest motorcycle road racing series, a record-breaking field of 35 riders started on a total of five motorcycle brands: BMW, Honda, Kawasaki, Suzuki and Yamaha. 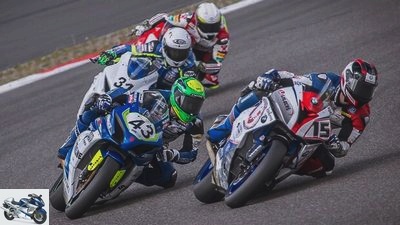 The first IDM Superbike 1000 race had to be canceled and restarted due to the onset of rain. The track and the pit lane were under water within a few minutes.

After a short break and returning sunshine, after 15 laps of the race, the Dutchman Danny de Boer (Van Zon-Remeha-BMW) won ahead of his team-mate Markus Reiterberger. Florian Alt (Team Yamaha MGM). The trio is one of the title favorites.

How the podium places were distributed was open to the end. Markus Reiterberger, who made his IDM comeback after a season in the Superbike World Championship, said enthusiastically: “I was still in the lead at the beginning of the last lap, but Danny de Boer braked a bit later than me before a corner. So it was over. We fought each other from the beginning to the end. I like that. That’s the way it has to be.”

In the second run of the day Reiterberger dominated the top and played out his World Cup potential. The podium was firmly in BMW hands. Next “Reiti” His teammate Jan Buhn from Kronau and Knittlinger Dominik Vincon (BMW Stilgenbauer) jumped on the steps. De Boer and Alt had fallen.

Championship stand of the IDM Superbike 1000

Kevin Wahr from Nagold achieved a double victory in the IDM Supersport 600. He too has World Cup experience, but exchanged blows with Thomas Gradinger from Austria in both races, with the latter slipping offside in the first run with the Yamaha. In the second run he finished second.

Like Kevin Wahr, Max Enderlein from Hohenstein-Ernstthal also celebrated a double podium success, but in the next two places. He is now second in the overall standings behind True.

Championship stand of the IDM Supersport 600

In the IDM Supersport 300, the smallest class of the championship, an exchange of blows between Maximilian Kappler Jan-Ole Jahnig was already emerging.

The two Yamaha riders ride in the same team and are friends. They only become competitors on the track. Kappler won the first run and Jahnig won the second. The 16-year-old high school student from Thuringia felt like he was on cloud nine when he overtook his buddy Max in the last few meters out of the slipstream.

Championship stand of the IDM Supersport 300

As expected, the duo Markus Schlosser / Thomas Hofer from Switzerland dominated the IDM Sidecar. While Andre Kretzer / Jens Lehnertz were able to put pressure on the team in the first race, the Swiss drove up and away in the second race. The participation of women in the class is interesting. Seven experienced as well as young amazons were represented in the field of participants of the 19 teams. 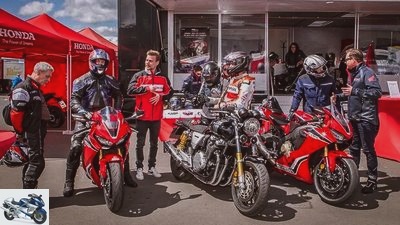 IDM visitors were able to test drive the current models from Honda and other brands at the Nurburgring.

The Twin 700 Cup and the Suzuki GSX-R 1000 Cup were held as part of the supporting program of the IDM.

During the lunch break, bikers who had traveled were able to cover every meter of the racetrack in a motorcycle parade. Or they took test drives with motorcycles from the current Honda models, Kawasaki and Yamaha in the vicinity of the Nurburgring. The open paddock, the pit walk and the public press conferences enabled an IDM to be touched. Visitors and fans almost never come this close to the athletes.

A new era has dawned in the IDM. Everyone involved pulls in the same direction to present the championship, in which high-class racing is offered. The next IDM round will take place from 7th to 9th Zolder 2017 in Zolder, Belgium.