The biggest of small scooters

Do you dream of a big, elegant, rewarding scooter with a large load capacity but your B license does not allow you to take more than a 125 cm3? The Piaggio X10 125 may be the solution. Almost nothing distinguishes the model 125 from its big brothers X10 350 and X10 500…. But suddenly, does a 125 based on a 500 give a heavier anvil compared to a lighter 125? ? and therefore too heavy and uncontrollable in the city? Test…. 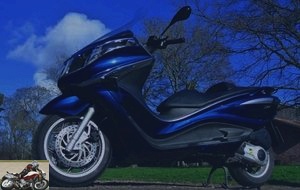 Piaggio talks about downsizing, in other words, how to decline the same model in several variations, by sharing as many elements as possible and in particular the whole frame and fairing part. It is on this concept that the X10 has been developed in 3 versions: 500, 350 and finally this model 125. And indeed, nothing distinguishes the three models by far. Up close, you will have to look at the rear arm and the exhaust to guess the displacement, especially since the number indicating the displacement is not listed anywhere..

We therefore find an elegant Italian scooter, with an enormous size for a 125. Piaggio has indeed started from the large superior model to insert a 125 engine, here a 4-stroke single-cylinder developing 15 horsepower at 8,750 rpm for a torque of 12 Nm at 7,250 rpm. 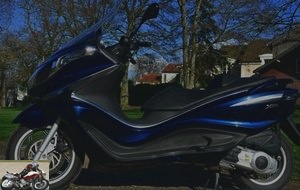 Everything is huge, from the stern to the bow, with a triple frontal optic with LED lights as daytime running lights, a relatively high bubble and a wide rear part, equipped with LED lights. The saddle is spacious for both the rider and the passenger, with enough to support the pelvis. Note the deflectors at the front for even better protection from wind and bad weather. 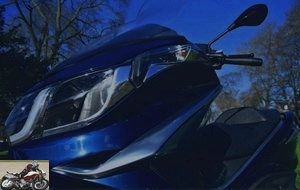 Only the mirrors seem undersized here compared to the rest, but still offer good visibility and are easily adjusted.

Small final touch, we note at night, the backlighting of the commodos … to which is added a digital screen on a bluish background of the most beautiful effect.

The 1.70 rider barely puts his feet to the ground, despite a reasonable height of just 760mm. It must be said that the saddle is wide.

Once seated, the template impresses at first glance. We are well seated and well installed in a spacious space. Under the eyes, we then find an imposing dashboard, complete, easily readable, all the indicators of which are permanently readable without taking their eyes off the road. On the left, there is a large analog meter incorporating a fuel gauge. On the right, there is a large tachometer incorporating the engine temperature. In the center, a large digital display with on-board computer simultaneously indicates: outside temperature with frost indicator, time, totalizer, partial double trip and instantaneous consumption alternating with average consumption, estimation of the remaining range in number of kilometers and battery voltage. 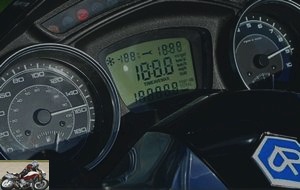 On the other hand, no parking brake for the 125 model (unlike the 350 and 500 cm3). The feet have their place, either under the pilot as standard or extended forward; which turns out to be a fairly pleasant and natural position on a daily basis.

The X10 snorts quietly. You won’t wake up the neighbors in the middle of the night, even when gas is full. A push on the right handle starts the scooter, which takes off slowly. The first impression of unbalance disappears from the first meter, even if compared to a Liberty, maneuvers at very low speed are done with a little more caution for fear of getting carried away. The scooter is also longer at 2265 mm and will not turn around in a handkerchief like other 125 cc. 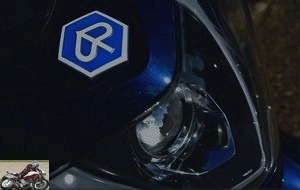 The X10 125 is no war lightning. The scooter reacts instantly to the throttle but the size and weight make it maintain standard acceleration; enough to start at a red light, but not as dynamic as sportier models like the XMax in the same displacement. Handle on the cleat, the tachometer needle flies off immediately beyond 8,500 rpm but the feeling of driving compared to accelerating more slowly and not letting the needle rise until 7,000 rpm is not perceptible when it comes to driving. Suddenly, to save the centrifugal clutch and fuel consumption, we no longer try to open wide systematically. In fact, the X10 encourages a rather "eco" and relatively cool driving, while offering a sufficient extension to lose its license in town, knowing that the engine speed is rather on average around 7,000 rev / min (50 km / h 7,000 rpm but also 70 km / h at 7,000 rpm).

The size was initially rather think of a big maxi-scooter and dread the insertions in inter-row. With well-positioned mirrors (which do not affect those of the cars) and a not so important width in the end (800 mm), the X10 goes everywhere, including at low speed. Its size is also more visible to motorists who tend to stray more naturally than when facing smaller scooters. And on expressways, it winds quietly at 70 km / h and 7,000 rpm, or a quiet regime.

Heavy (for a 125), but manoeuvrable, it can be parked easily in two-wheeled parking spaces in town, even at a standstill, especially since it has a side stand in addition to the central one. In the absence of a parking brake, you just have to avoid stopping on a slope. 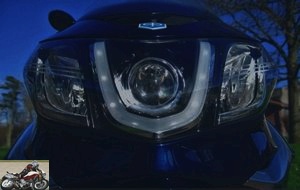 The X10 sets off briskly on the highway, easily stalling at 110 km / h and 9,700 rpm…. to break at 116 km / h (i.e. 109 km / h real). It is too tight for long journeys (unlike the 350) but sufficient for peri-urban or even a little more. Its size makes it less sensitive to overtaking by trucks, especially since its stability at "high speed" is impressive, including on large curves, swallowed very smoothly, well helped by its large front wheel. of 15 inches. Even large curves swallowed at sustained speed on rutted roads do not lead to a light front, which remains suddenly holds the course and remains perfectly in line. Reassuring and comfortable.

The overall size of the scooter surprisingly protects well and much better than the majority of scooters which often generate wind and eddies in the legs. This effect is very limited here.

The high bubble protects well but, on the contrary, generates some eddies in the helmet, compared to a scooter model with a lower bubble. While this is not a problem in the city, on a somewhat long route on the motorway, it generates a little noise which is necessarily pleasant on a long trip. 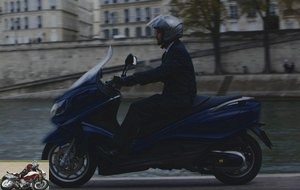 Naturally, the X10 is more at ease on national as well as on departmental where it can find its cruising speed with ease. It winds up quietly at 9,000 rpm around 100 km / h real. The big curves are taken with disconcerting ease, the scooter seeming to be placed on a rail. At higher speeds, it takes a little harder as well and will require a bit of effort to change course. Our test model was also fitted with Feelfree Wintec which offer a quite simply extraordinary grip compared to the original equipment, adding even more pleasure in the sequences from one turn to another and even more on the wet, with impressive confidence. No apprehension of the blow, to take the angle and this, whatever the rhythm. 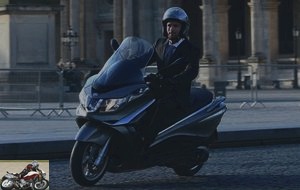 With ABS and ASR (anti-lock), braking is a treat, thanks to its power, the feeling offered and the feeling of security provided, especially in the wet. With ASR, each of the wheels is in fact equipped with a revolution acquisition system – a sensor and a tone wheel – instantly measuring its speed and deceleration relative to the vehicle. The sensors communicate with a 3-channel hydraulic unit that activates the ABS system if either wheel suddenly decelerates, preventing the wheels from locking. This cannot be compared to the stability offered by a three-wheeler, but you can really take the brakes hard, without feeling any quirks or parasitic behavior. The 240mm rear brake is almost enough on its own to stop the scooter, even when launched at full speed. As a result, the 280mm front disc brake provides more effective full braking than the rear, despite the overall weight that could have delayed overall braking effectiveness. And both combined offer safe and fast braking. 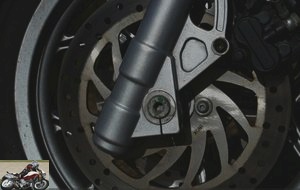 Wide saddle and efficient suspensions provide excellent everyday comfort. The defects of the pavement are extremely well erased without suggesting any particular flexibility. While we generally lose stability at "high" speed when cornering with a frame that wiggles, the X10 remains unperturbed on all occasions with excellent stability and comfort.. 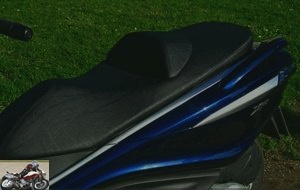 With the same trunk (52 liters!) As the 350/500, the X10 gladly accommodates two modular helmets (Schuberth C3 or Shoei Neotec type as in the photo), plus a computer and two rain suits with gloves. It is in fact the largest trunk offered by a 125 and larger than many maxi-scooters. Its interior length even allows for a tennis racquet. And on top of that, it’s also wide enough to cram even other things into it. In short, the X10 is the king of on-board storage, fulfilling the best role for those who need day-to-day space.

The 5-liter front storage compartment completes the overall storage capacity of 57 liters, plus a 12 V outlet, which is great for recharging a laptop. 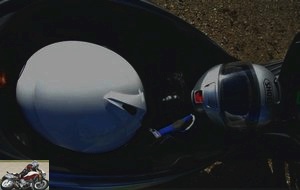 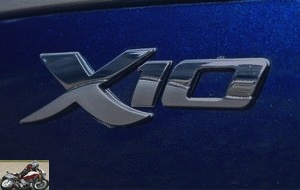 Enhancing, elegant, the X10 125 is perhaps the pinnacle of the 125 cm3 scooter with real performance…. for a 125. Its size and its boarding capacity even make it possible to consider leaving its urban use for a weekend in the countryside, especially as its comfort allows you to drive in one go with its possible autonomy. . We end up forgetting its daily weight to appreciate its overall performance, even if its price at 4,299 places it in the upper range of prices of 125 cm3 and could make consider the superior displacement for those who have the motorcycle license; knowing that the 350 is trading at only 1,400 euros extra.

The technical sheet of the Piaggio X10 125 scooter