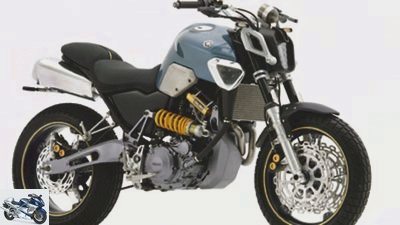 No progress without visions: from the study of the major manufacturers to the dream bike of the smallest manufacturers, everything was represented at the Milan trade fair.

Gone seemed to be the days when the renowned manufacturers tried to outdo each other at trade fairs with pure show exhibits and concept bikes.

But this fall, three of the four big Japanese brands surprisingly dedicated themselves to the topic of visions at the Milan trade fair. In addition, exotic micro-manufacturers from Italy to mass producers from South Korea basked on their new products.
The exotic car on the Honda stand was without a doubt the Tamago scooter. The German translation of the egg is what the model strategists call a rolling suitcase. Generous storage space of 65 liters offers space for two helmets or for
daily needs and thus ideal conditions for the urban single-track commercial vehicle.
High utility value also grants Kawasaki of his concept study ZZR-X with axle steering. As the “ultimate high-speed tourer” of the future, it should run at top speed
the Autobahn looks just as good
hand in like on the big tour. The
Draft shields regulate variable flaps depending on the speed. There is a generous under the dummy tank
sized cargo space. Suitcases with adjustable storage space, the foldable sissy bar and the adjustable window should satisfy the touring rider under all conditions.
Associated more emotions than all-round properties Yamaha with his study MT-03. The single in a supermoto outfit is intended to “push the current limits of
Expand designs, give the rider a more intense experience than any other bike through minimalism and, last but not least, an incomparable sound «. Yamaha ascribes true miracles to the study with toothed belt drive.
It is more realistic Gilera with the Ferro. Tiptronic or Quickshift only for car or scooter drivers? Not if the Italians have their way. On the basis of the 850 V2 (driving report MOTORRAD 10/2002), a naked bike with a continuously variable transmission was created which, thanks to electronic shifting, offers the driver all options for gear selection. The
Pilot sort the gears conventionally with the footshift lever, intervene semi-automatically if necessary in the shift program or let the electronics choose the gear ratio in fully automatic mode.
A new cruiser from Hyosung, the Aquila 1000, offers far fewer innovations. Obviously, the South Koreans use the same method as the Japanese did in the late 1950s. Hyosung not only copied the naked bike Suzuki SV 650, the Aquila also comes to the viewer with
Engine as well as damn design
Japanese before. Only at second glance does the 1000 V2 with two overhead camshafts appear far less
filigree. Just like the first copies
European bikes from the Far East four decades ago.
Of course, replicas are forbidden for Italian luxury smiths. Mondial presented the Starfighter to the public in addition to their revised Piega and the new Naked RZ Nuda. With the two angular headlights placed aggressively one above the other, the instruments floating freely above the fork bridge and the two silencers under the rear, it seems well armed for the Star Wars.
The Macchia Nera of the traditional tuning company is also relentlessly open NCR showing off their qualities. The noblest materials wherever you look, especially titanium is what the Bolognese love. Shimmer like that
the engine parts such as the clutch and all screws in the typical matt gray of the sinfully expensive metal, as well as the frame, the exhaust system and, last but not least, the complete radiator. A former Ducati racing engine from Franky Chili and exclusive chassis components lift the price of the single item to an exorbitant 150,000 euros. But it can also be cheaper, after all, interested parties can purchase any component they want from NCR individually.
The Ghezzi-Brian Kimera with a Guzzi engine, its own chassis and the internal disc brakes in the front wheel, which is typical for this manufacturer, is significantly cheaper, but hardly less exclusive. Other small manufacturers such as TM-Racing followed suit
the Black Dream fun bike
yourself. Lots of visible carbon fiber, one
The single-sided swing arm and high-quality components such as the Ohlins fork cut a fine figure not only on the Supermoto slope, but also in front of the ice cream parlor.
While the rarities that can be bought arouse desires that often fail because of the price, the visions of the big manufacturers mostly disappear again without a sound. But one should never give up hope. Sometimes the wish also becomes a reality.