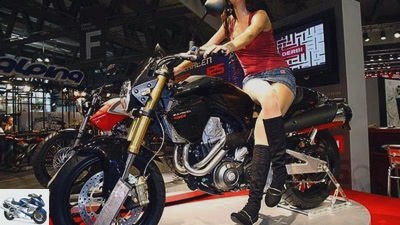 Gleanings from the Eicma fair in Milan

Gleanings from the Eicma fair in Milan
The fine little ones

Small manufacturers, small series, sometimes just prototypes. But that hardly detracts from the attractiveness. It is the fine little novelties that give a motorcycle vintage its spice.

To create a large two-wheeler manufacturer from many brands that have been bought together – this is currently the goal of the Piaggio Group. In addition to the sporty and technical flagship Aprilia and the traditional manufacturer Moto Guzzi, flanked by the scooter brands Vespa, Gilera and Piaggio itself, Derbi has taken on the role of the youth brand within this group.

The range of the Spanish-based manufacturer was correspondingly colorful and stylish at the past autumn trade fairs. Three
of the series motorcycles and prototypes presented use the new, water-cooled four-valve 125cc engine, which was designed by Piaggio’s engine development department. In addition to the already in
Mulhacen 125 shown in issue 23/2006, this is also the Mulhacen Freexter 125. It shows a peppy two-tone paintwork and cast wheels, dispenses with trim parts and makes street fighters. Comparable to the BMW G 650 Xcountry is the Derbi 125 Cross City, a Senda with a new direction. It is aimed at young people who place less value on pure driving dynamics. Its exterior is simple but original, the technology is simpler than that of the other 125 cc. That is why the air-cooled two-valve engine from Honda, which previously powered the Senda models, will survive in Cross City. Despite a good three horsepower deficit, which has a negative effect when driving in this displacement class.

Individualization, so the message that Derbi Mediated with all of the models mentioned so far, it can be achieved much more effectively than previously in motorcycle construction by skillfully and flexibly varying a few basic models. Small retouches with a great optical effect create attractiveness. Not a stupid strategy when it comes to targeting young customers. And one that could also work for a slightly older clientele. That is why there were three variants of the large Mulhacen with the 659 engine from Yamaha / Minarelli in addition to the 125 cc. Goes into series production
the Mulhacen 659 Cafe, which, in contrast to the scrambler philosophy of the original model, has a little more to do with sporty cornering. Black paint, sticky 17-inch tires on cast wheels and an upside-down fork from Marzocchi – a cleverly made variant is ready.

Another is created in the exact opposite, namely a conspicuous, green-dominated colorfulness. If a longer fork and shorter shock absorbers are used, a chrome-plated frame and a matt black motor housing, the reminiscence of American dirt and flat-track machines is perfect. This is what happened in the form of the prototype Hot Bob. Even the fans of modern digital
In the future, video technology could advance into completely new areas of cinematic creation with Derbi. The lemon yellow painted Mulhacen X-Vision has four cameras that can be operated from the handlebars and create a perfect all-round view. How much the display with the film images distracts from driving remains to be seen.

The 660 single-cylinder, built by the Yamaha subsidiary Minarelli, has recently been used in the Derbis, in three Yamahas and three Aprilias in a street motorcycle from the French manufacturer Scorpa. Previously specialized in trial motorcycles that also run on Yamaha engines, Scorpa plans to bring the roadster onto the market in autumn 2007 at the latest. Raidster 660 is the name of the ingeniously simple motorcycle with the captivatingly beautiful exhaust system. The styling comes from Thierry Henriette, the boss of Boxer-Design, who was also involved in the construction of the frame. “The goal was to build a light and easy-to-drive motorcycle that should also be cheap,” he says of the Raidster. If the asking price of 6000 euros can be kept and the weight specification of 148 kilograms is correct, it could even achieve considerable sales success. Especially since, thanks to proven Yamaha technology, no problems with reliability are to be expected. The four-valve engine has already proven its stability in the MOTORRAD endurance test.

Cagiva presented another single-cylinder, albeit with a completely different objective: It is the chassis of a Mito 125, in which the engine of a Husqvarna 510 TE was inserted. Just to test the audience reaction. The idea of ​​turning the still excellent Mito chassis into a lightweight, highly dynamic sports motorcycle is not new. About ten years ago, MOTORRAD test boss Gert Thole found a Mito with a Husky engine on the Cagiva factory premises, and some machines were even equipped with the Suzuki 650. The fact that such an attempt is now appearing in public for the first time is at least an indication of serious considerations. In connection with Cagiva I would like to briefly refer to the new, very attractive two-tone paintwork of the Raptor 125 – also an offshoot of the Mito.

As can be read in relevant Internet forums, the 650 models from Hyosung currently not the best run. Problems with the reliability of the already home-made styling cannot be compensated for in the long run, even by low sales prices. In this respect, the one shown here is GT 650 X is a bearer of hope with its high-quality equipment. The combination of tubular space frame and cast aluminum parts replaces the hulking original chassis in the most advantageous way. It is not yet known when it will go into series production. For now, it must suffice to say that the Hyosung engines will be converted to fuel injection in the coming year.

In addition to the presentation of the Black Rocket, a variant of the steering knuckle-steered 984 C3 2V equipped with an underseat exhaust and a tuned Ducati two-valve, the small Italian manufacturer surprised Vyrus on the Eicma with the Zen. The puristic roadster based on a BMW R 1150 R was created on the initiative of a design studio cooperating with Vyrus. What was superfluous was literally styled away. Lines, which in the original BMW look like a game of Mikado that has just been raised, are summarized by a skilfully designed, flat rear frame, which merges directly into the tank panel. Perhaps an incentive for the Munich-based company to implement a sporty, simple design not only in the HP models.

Morini made a first suggestion for something that is sonically called “endurone” in Italy and in Germany is soberly called large-scale enduro. MM3 concept is what designer Rodolfo Pascoli calls his attempt to find a Morini-typical path in a densely populated segment with the finest shades between road and off-road suitability. In his own opinion, he did better with the front of the MM3 than with the rear. In any case, nobody at Morini left any doubts that the study will change significantly before it is ready for series production. Small manufacturers who cannot afford expensive market research departments are more dependent than others on the reactions of a trade fair audience as an indicator and therefore tend to make concepts public at a very early stage.

At Fantic, the manufacturer of small off-road vehicles that has been renowned since the 1970s, the conversion from two to four-stroke engines is in full swing. the Caballero 125 of the 2007 vintage gets an air-cooled Yamaha / Minarelli engine planted in the long-legged and uncompromisingly high-quality off-road chassis. In addition to thoroughbred sports machines, which are tuned by sharper camshafts, road offshoots will also be available from February 2007. As an enduro as well as a supermoto version, the small four-stroke engines cost around 4100 euros.

Because a Kawasaki KLX 450 R appeared in the Intermot report in MOTORRAD 23/2006 on the subject of a single cylinder, a very meritorious initiative by the Italian importer of Kawasaki off-road motorcycles should not be concealed. The company KL has converted the recently presented competition enduro to a supermoto and equipped it with grippy 17-inch wheels. How much power is left after the homologation cannot yet be stated by KL, but the proud price is: 9830 euros.