When we think of traveling abroad, we often think of a big trail and possibly a big GT but there are also the variations of the traditional big GTs and in particular the Honda F6B, version without top case of the Goldwing. Often relegated to the level of leisure motorcycles, what is the bagger worth for a great trip as a duo? We chose Norway to the Arctic Circle to test its ability to travel with 6,000 kilometers on the program. Trial over several weeks… 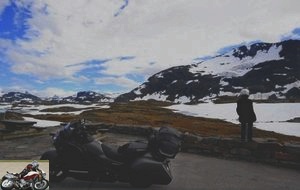 Is it still necessary to present the F6B so familiar is the GL1800? ? 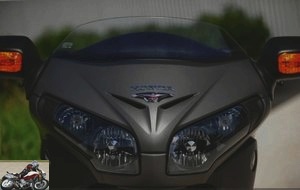 We thus find the same massive front face as well as the same cockpit worthy of an airplane with all these buttons. But when the Goldwing GL 1800 displays a high bubble with the human position in the center which goes up to the rear with the enormous passenger seat whose rear trunk also provides the backrest, the F6B is on the contrary refined with an elegant curve. ending on the side cases kept. Faced with a Goldwing liner, the F6B is the elegant and refined counterpart, further reinforced by a particularly successful matt gray of its 2015 vintage.. 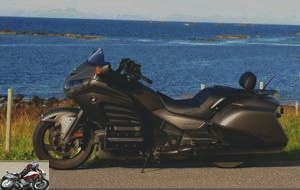 The F6B keeps the audio system (4HP) placed in front with radio, USB, iPod and the Intercom system. 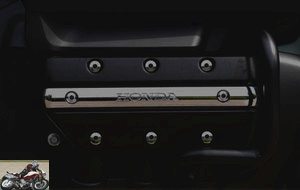 At the rear, there is an elegant and large rear light whose sissi-bar does not spoil the line by integrating discreetly into the whole. 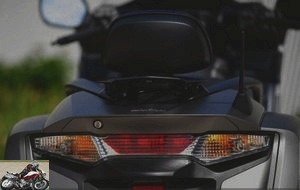 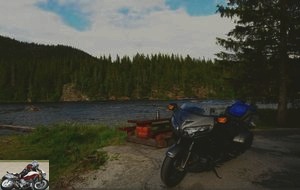 It is especially the motorcycle which underwent a slimming cure with 21 kilos less than the Goldwing for a full weight made of "only" 392 kilos..

Finally, the 40th anniversary version regained reverse gear as well as cruise control and regained 7 kilos suddenly compared to the initial version of the F6B. 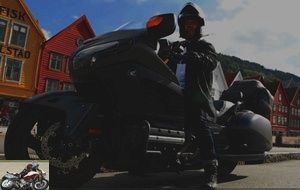 It is easy to climb on the F6B and the feet are flat on the ground for the 1.70m pilot, unlike the higher Goldwing and above all which offers a wider and encompassing saddle. There is officially only 15mm difference but with the thinner saddle, they make all the difference, further reinforced by the less weight. This pressure on the ground immediately reassures the driver who could be frightened by the 385 kilos fully loaded. In fact, the F6B goes up more easily from the side stand than its big sister Goldwing. And that, day by day, is really appreciable. Likewise, the flat feet and the lower weight help enormously when maneuvering at a standstill. Even pushing the motorcycle into the garage is easier.

On the other hand, we find the usual dashboard of the GL1800, with its huge counters and rev counter clearly visible under the sun and at night. Even the analog fuel gauge is easy to read.

Only the warning button is positioned at the lowest of all the buttons on the left fairing and is not always easy to find without taking your eyes off the road.

The only difference lies in the absence of a slider to adjust the height of the screen or of a flap to have the heat of the engine on the feet in winter compared to the GL 1800. 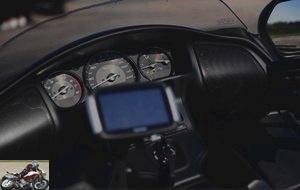 The 40th anniversary version now has reverse gear as standard. As much reverse is essential on the Goldwing, it is less so on the F6B, even if this can facilitate an exit or a complicated maneuver in town.. 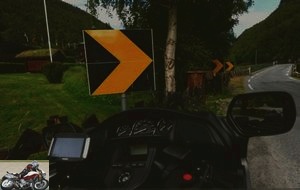 The hands rest on the handlebars naturally with an upright position and the arms bent almost as if the handlebars were a keyboard. The thighs barely touch the motorcycle and less than the knees which grip it perfectly, even if day by day the position encourages a noticeably spreading of the legs in a natural way.. 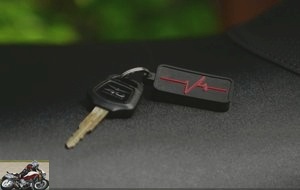 With this anniversary vintage in 2015, even the key features the wings and the 40th anniversary logo..

The double escapement lets out a deep, smooth melody. No vibration, just that deep sound that’s more like a purr than a growl. And yet, a single push on the right grip and the earth ship literally takes off, even nervously first. It must be said that the first is very short with a maximum of 60 km / h. We cut and the torque of 167 Nm almost brakes the beast. It’s a lot more nervous than the template might lead you to believe. We therefore pass the second then the third report naturally to roll up immediately. 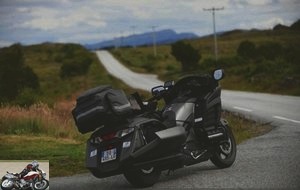 The F6B accepts all revs up to driving in overdrive on the last gear in town. It resumes from the lowest speeds and 20km / h at 500 rpm on the last report to wind naturally on velvet. With the need to be under 50km / h, one might think that its size would offer a significant sway not liking low speeds without making the bike oscillate. In fact, it is not and a perfect balance allows it to wind effortlessly even at 10km / h. And with regular areas at 30km / h in town in Norway, we were even able to check it regularly to be confronted on a daily basis at a low speed, without suffering in the least.. 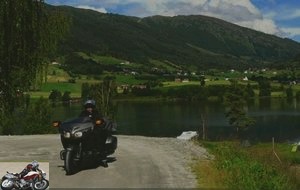 The exterior template and the width induced by the huge mirrors could be scary to practice the interface without forgetting the side cases. But when the mirrors go to the front, it must go to the rear. And in fact, the interfile is practiced well, thanks to the excellent balance of the whole which does not require forcing. The peripheral of the usual cities therefore allows a fast and efficient interfile. It really needs to come close to prevent it with less room to pass than a roadster. Likewise, if the interface is easy, the zigzag maneuvers between the cars possible with a small roadster are not as easy with the F6B whose overall size must still manage to pass.. 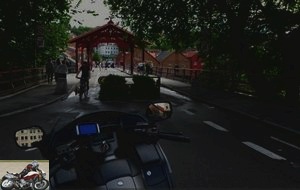 The F6B engages on the motorway on a flying carpet, purring at half speed at 120 km / h. Reaching Norway via the German highways really helped push the bagger to its maximum as it gains 30 km / h speed for every additional 1,000 rpm. At 160km / h at 4000 rpm, then 190km / h at 5,000 rpm, we will then look for the 6,000 rpm at the start of the red zone, reached at 220 km / h. The large curves then swallow naturally effortlessly, the bike naturally tilting almost in automatic pilot mode. It just proves to be sensitive at 210km / h in a duo, with the big bag at the back and especially the weight of the suitcases not well balanced between the left and the right to generate a slight shimmy in the handlebars, an impression that disappears as a duo without all. luggage weights. At this speed, the kilometers go down very quickly and with an incredible feeling of security, especially since the bike is not sensitive to the wind. A large size generally induces greater wind resistance and unpleasant behavior in strong winds, especially sideways. With the F6B, it is not, on the contrary, with an imperturbable stability, even at very high speed..

In fact, it is the helmet that shows its limits and not the motorcycle. Because with the absence of a real bubble, there is a real flow of air on the shoulders and the helmet. But when certain motorcycles generate infrasound by this air flow or on the contrary a non-homogeneous thrust, the head is tossed about. This is not the case here where the head remains perfectly in line without lateral thrust (even if the lateral controls are still hard). But the helmet whose foam is packed inside after tens of thousands of kilometers in its life, just starts to vibrate slightly and quickly from 210 km / h. And it is then above all the fuel gauge whose needle drops visibly which prompts you to take a break after 250 kilometers at this rate.. 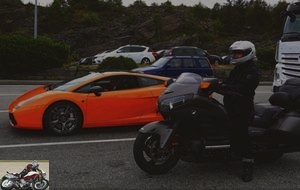 Finally, there is the possibility of engaging the cruise control, from the right commodo. We do it almost without thinking about it. One press to activate the cruise control, another press to set the speed. You can then either increase or decrease the set speed and with a simple brake stroke, even slightly, disengage the regulator. Just correctly adjusted buttons allow you to make changes without taking your eyes off the road.

The F6B finds as naturally the departmental roads as it is at ease on the motorway. We don’t just have the speed up a notch even if we can stay on the overdrive. The turns seem to come faster and tighter just take a little more anticipation. Because even if it is possible to catch up at the last moment a curve attacked a little quickly on entry when we realize that its curvature is closing again, finally faster than expected, the overall size tends to oversteer. You just have to push a little harder for the bike to tilt and pass.. 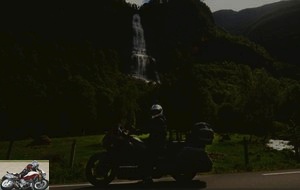 When the departmental becomes mountain and the virolos become pin, the pace slows down a notch but what then becomes the slow of the permit is done naturally and effortlessly. The F6B is thus by far the easiest motorcycle in this category to master in the hairpins.. 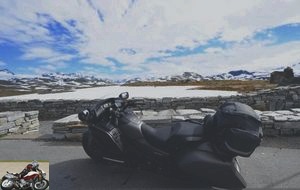 And at a slower rate, consumption also drops … below 5 liters per hundred! And not just a few kilometers … It was thus possible to refuel just after a milking of nearly 500 kilometers ! 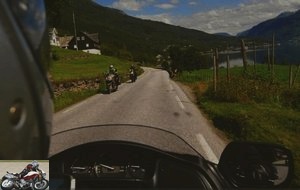 The low beam lights illuminate extraordinarily well, so much so that it is possible to drive safely at night on the motorway in low beam without ever feeling the need to switch to high beam. Then in high beam, the landscape lights up around. Driving comfort is also based on this night lighting. 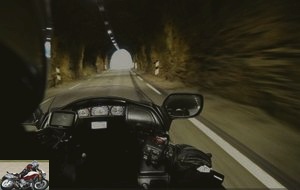 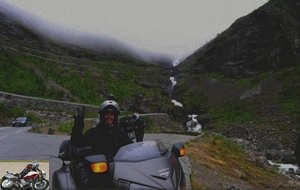 Braking is up to par in town and on departmental roads. Now, launched at 200 km / h on the motorway, you really have to take the brakes to stop before the car which pulls out at the last moment. This is where we realize that the F6B does its 400 kilos and that launched at 200km / h, it does not stop in a few meters. 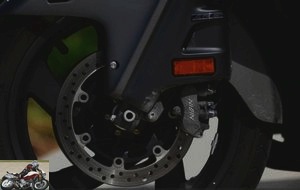 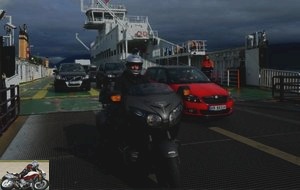 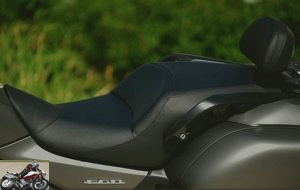 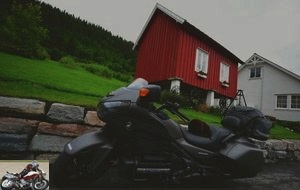 The suitcases contain enough to leave for a trip of several weeks, depending on the necessary clothing needs. Our model included a luggage rack and Sissi bar – Honda accessories – which proved not only practical but essential to accommodate an additional bag, but only because we had all the photo equipment in one of the suitcases (two cameras, plus cameras, plus lenses including telephoto) and in the other case all the electronics (computer, tablet, recharges) as well as rain suits, locks and tools. 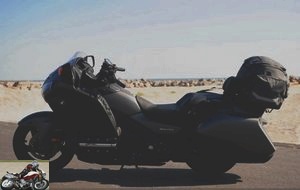 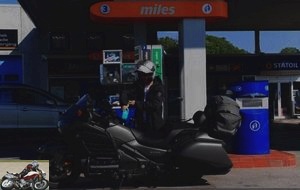 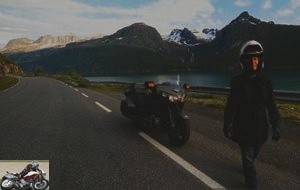 The Honda F6B is revealed after nearly 6,000 kilometers as an exceptional traveler for its comfort and ease of driving. The big stages swallow up effortlessly and its ease of driving even allows it to make the mountain with the pins which go with its sister to pour even in when of pronounced cant. Its lower loading capacity compared to the Goldwing is resolved thanks to the rear luggage support. Above all, it is much easier and more natural to ride in all circumstances than the Goldwing, which makes it more than an alternative, the ideal choice for those who want a motorcycle capable of taking it very far with all the comfort, but without suffering from the disadvantages induced by excessive jigs in terms of handling or additional fatigue induced. At 24,599 euros, six thousand euros less than the Goldwing, the wallet will finally appreciate the additional pleasure provided by the bagger. The travel test does not ultimately change the conclusion of the initial test: a real crush, to try in the long term, certainly….