Half motorcycle, half scooter

At first glance, the Integra seems like yet another Pacific Coast evolution with a DN-01…. with a mix of scooter and motorcycle characteristics. Very encompassing and protective front, wide platform to put your feet from the middle to the front, large high bubble, wide saddle, no visible reservoir, low between legs …. It’s a scooter. 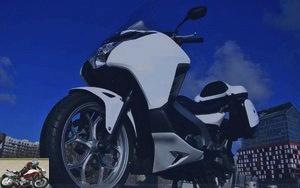 Sorry ! 17-inch motorcycle wheels, clearly visible exhaust, little space under the saddle despite the official 14.1 liters, “real” gearbox with clutch, final chain transmission…. it’s a motorcycle! Moreover, the chief engineer of the project is indeed from the motorcycle and seems offended when we talk to him about a scooter. 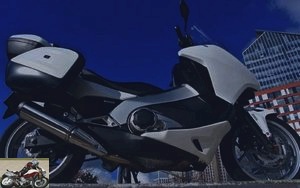 But Honda does not claim that it is a scooter, but much more of a motorcycle with simply scooter-like ease of handling. Why ? For the 2nd generation DCT box, among others. Kesako ? Dual Clutch Transmission ! Shifting is no longer at the foot here, but via a dual-clutch transmission that allows automatic shifting or manual control when the user so desires. In fact, we choose between automatic modes D (Road) or S (Sport) and manual mode allowing you to change gear with a trigger. Technically, for more flexibility of use, the gearbox uses two clutches: a first for 1st, 3rd and 5th gears, a second for 2nd, 4th and 6th gears. But we stay on a gearbox and a motorcycle behavior, already used on the VFR 1200. 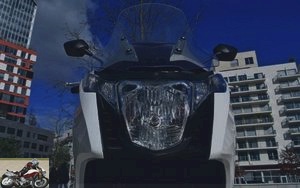 Behind these major changes is the new 670 cc liquid-cooled inline twin in a "diamond" -type steel frame, usually used on sporty models and large 17-inch wheels..

With little space under the saddle, the Integra wins by equipping itself with the top case and side cases, especially since they are particularly aesthetic and offer an increased storage capacity of 69 liters: 29 liters for side cases and 40 liters for the top case. 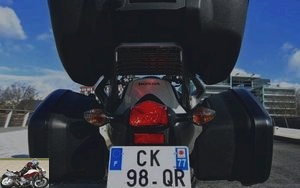 It looks like a scooter but you get on it like on a trail because the saddle is so wide. Suddenly, despite a relative height of only 790 mm, the pilot of 1.70 m barely touches the ground with the tip of one foot, like on a trail. On the other hand, unlike a trail, the weight is placed much lower and maneuvers at low speed or even near a stop are particularly facilitated..

Once seated, very straight or really very straight, we discover the dashboard shared and identical between the 3 700 cm3 models of the brand with a fully digital dashboard integrating a counter in the center, a bar graph type tachometer. horizontal in the upper part, a watch and two daily totalizers on the left, a fuel gauge with segments on the right as well as an indicator of mode choice: D, S or manual. Everything is very readable and practical, even under the sun. 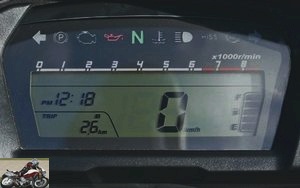 And on the left, there is a practical storage compartment. 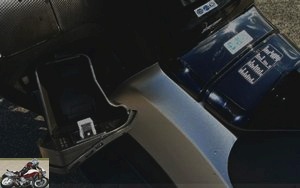 The mode change is effected by a button on the right stalk. Horn and indicators are positioned on the left as usual. You just have to take the time to get used to their respective position, with an annoying habit at the beginning of honking instead of putting on the turn signal, and pressing the turn signal while wanting to honk.

The Integra starts with the thumb with a discreet sound. We engage – or rather we push the thumb – then the first, once the crutch is folded. Everything starts slowly and easily. First you can feel the twin and the gear shifting…. which is done quite quickly. Result, we find ourselves on the last report in sixth at only 65 km / h. And when you release the handle, the speeds go down automatically but keeping most of the time a speed below 2,500 rpm.

When stopped, the engine automatically shifts to neutral, with no possibility of staying in gear. This is where the parking brake placed on the right comes into its own. Its implementation is accompanied by a red signal on the dashboard.

At your side, at red lights, heads turn and ask questions about a scooter that throws it, especially dressed in the top-case and the suitcases in magnificent pearly white. 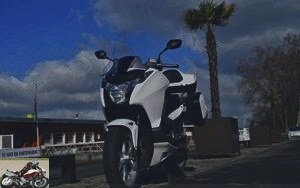 In standard road mode, starts and resumes are smooth in opposition to the nervous behavior of some maxi-scooters. Conversely, consumption is very gentle, around 4 liters per hundred! The first impression given by the first half hour of use is soft, very soft, even too soft. Obviously, each speed is around 2,300 rpm, and we thus end up in 5th at 55 km / h, or even in the last gear at 68 km / h on the ring road! And at this very low speed, acceleration and recovery are anything but dazzling. And then as the days go by, we become friends with a machine that is faithful, gentle, and easy on a day-to-day basis. Because despite its saddle height, its capacity of 670 cm3 and its weight (238 kilos fully loaded), everything is particularly easy to handle with an instant grip closer to a small basic weighing 40 kilos less. No overweight or unbalance here, but a real ease, thanks to a center of gravity much lower than on a motorcycle. Passage between cars is natural, although care must be taken when the side cases are mounted. It always goes in front despite a significant width of protection, but it is still wider behind.

In D-Route mode, despite the apparent smoothness, it is easy to start first and jump to the next traffic light. But to compete with maxi-scooters, a pull on the right trigger and you instantly go into sport mode. And there, instead of changing gear higher than 2,300 rpm, the Integrra goes up to 3,000 rpm, or even more depending on whether the right handle is kept open up to around 6,000 rpm (either the speed where it delivers the most power: 8.1 kW or 51 horsepower at 6,250 rpm) and easily stays high in the revs. Because if you accelerate slowly, the gear change is around 3,000 rpm but if you stay with the right handle turned fully, the gearbox waits for almost maximum speed before shifting. We then have an “intelligent” automatic gearbox, guessing the pilot’s intentions. And then we find a real dynamic and a real fishing, transfiguring the two-wheeler and completely changing the opinion of its rider towards it. We stay in an automatic gearbox, but it’s nervous and quick. To go even further, do not hesitate to switch to manual, and suddenly, we raise the engine in the towers and this, up to the switch…. very easily ! However, there is no need to downshift, since below a certain threshold, the gearbox still downshifts automatically…. releasing the pilot. And with 1 mkg of torque more than the T-Max and 5 more horses, it grows, and it wins the standing starts and the recoveries against maxi-scooters …. 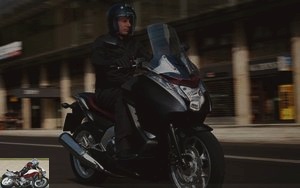 Only the rear suspension appears a little firm for the first few kilometers, while the front, on the other hand, feels a bit supple, especially under heavy braking, with the front plunging quite easily. A habit and a feeling that gradually fade, the pilot also adapting to a homogeneous whole.

The Integra willingly gets out and clears the motorway without a problem, blithely exceeding authorized speeds with all the power of a 700cc. With a rigid frame, road holding is then perfect, up to shameful speeds and well above the speeds allowing you to keep your license despite excess. Only the high bubble generates infrasound in the helmet and actually encourages you to release the throttle grip, despite excellent protection, especially over the entire bust.

The behavior of the automatic gearbox is still more noticeable here than in town. Because while in D mode, the sixth automatically shifts to just 68 km / h, you have to wait for 110 km / h on the motorway to pass the sixth. Better yet, the gearbox adapts to the driving style. Because it suffices to open wide at 110 km / h, and the gearbox automatically downshifts to one or even two speeds, to go back down to 4th, then go back to 5th, then offering real times without playing with the manual gearbox. . In this game, the 6th only takes place above 135 km / h. Enough to allow safe overtaking, especially since the Integra is not very sensitive to crosswinds and depressions associated with overtaking large trucks. 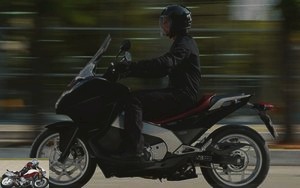 The Integra naturally returns to departmental, capable of automatically locking into the last gear at 68 km / h in almost silence in D mode, or at 110 km / h in S mode. If it automatically switches back to 5th at 65 km / h in mode D, it waits for 92 km / h in mode S. Once again, the mode chosen determines the dynamic behavior…. and consumption. Driving is done here or casting or dynamic and in a very pleasant way, forgetting to change gears…. or almost. Because you have to be at the right speed when passing a curve, otherwise you will feel the gears shift in the middle of a bend, which is not always ideal.

The Integra benefits from the famous combined system in addition to ABS, a system that is ideal for everyday use, safe and only causing ABS to be started in extreme conditions.. 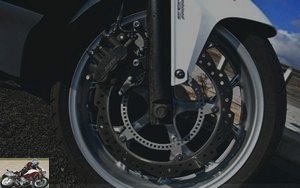 Little storage under the saddle encourages you to take a top case and suitcases, which are really not options here, but an obligation. The space under the saddle allows in fact just to place a rain suit and a large disk unit (but not a standard lock, too long).

The saddle is mounted on a jack and easily remains in the high position. All the more appreciable, as the fuel cap is placed below. 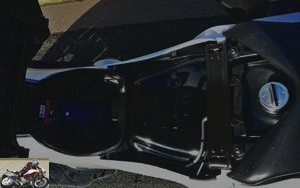 The parking brake is very good, but we would have liked an automatic parking brake, as implemented on some maxi-scooters…. as long as everything is automated, go through to the end of the process.

The sidestand instinctively places itself under the foot when stationary, automatically stopping the engine; while it is possible to start the two-wheeler on the side stand. The Integra also has a central stand, and is positioned on it very easily.

We may regret the choice for the chain, which requires a little more careful and rigorous maintenance than the protections or belts of the competition..

Despite a small tank of only 14.1 liters, the Integra offers a range of 300 kilometers! In an era of fuel increases, this work on consumption is a real plus. The fuel gauge is more precise, losing a first stick only after 75 kilometers, then every 40 kilometers, the last stick disappearing to enter reserve after 225 kilometers. And with 3.5 liters of reserve, there is still enough to cover about eighty kilometers. 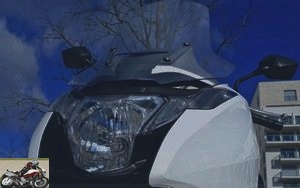 Economic ! Inexpensive to buy for a 700 cm3 (and 2,500 euros cheaper in particular than a large maxi-scooter), consumption reduced by more than a liter compared to the competition, maintenance frequency every 12,000 kilometers, change spark plugs only every 48,000 km, much cheaper insurance…. Cheap my son! Honda has brought to the bike here qualities that are first found in cars and with all the qualities of Honda finish and durability. Purist bikers will undoubtedly find the 51 limited horsepower for a fluff with friends but urban bikers who do not want to die of shame or deny their motorcycle origins will find a motorcycle with the ease of a useful and faithful two-wheeler on a daily basis for a very reasonable price, while benefiting in addition to a serenity vis-a-vis a little or not stolen model (unlike maxi-scoots usually monopolizing flights in town). In the end, the Integra is a serious, economical choice…. the choice of reason.

User reactions and testimonials on the
motorcycle guide