The production version inherits the limited series in 2018

Past star of 125 scooters! Because the Yamaha XMax 125 has monopolized sales of 125 scooters for ten years to such an extent that more than 140,000 copies have been sold. Sporty look, performance, carrying capacity, it had everything to please, despite a price placed in the upper bracket with its more than 4,200 euros. And then the Honda Forza 125 arrived, sweeping away everything in its path and dethroning the scooter that we thought was indestructible. The Xmax is therefore back in 2018, euro4 now. But the improvements go far beyond to regain his title. Challenge at your fingertips ? 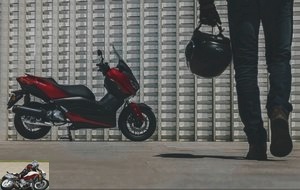 If the Xmax has already evolved several times since its launch in 2006, the connection remains obvious, not only for the 125 but for the entire Max range up to 400 cm3. Because the three models are now modeled on each other, while benefiting from a common platform. The key to success is undoubtedly there, a common platform, with maximum sharing of the different elements, in order to launch advanced scooters with more features while keeping prices as low as possible..

Beyond the sharper aesthetic and now 100% LED lights at the front and rear, the 125 therefore shares the same chassis as the 300, a guarantee of increased rigidity and better stability. It also gains the Traction Control already available on the 300 and 400; Admittedly not very useful in the dry with a power of just 10.5 Kw, but can be useful in the wet and the cobblestones. It also benefits from the Smartkey, the transponder allowing to start without having to put a key in the Neiman … a practical detail which will be especially appreciated for those who equip themselves with an apron. Nothing could be more annoying than looking for the lock under the apron. But above all, in its basic version, it benefits from everything that made limited series – much more expensive – in the past: better finished saddle, saddle stitching, metal plate inlaid in the saddle, finish … Always on the practical side, the windshield is now adjustable over 5 cm (using suitable BTR keys and increasing the protection from 1415 to 1465 mm) just like the handlebars! Can be positioned in two positions to adapt the driving position to the morphology (adjustment to 20 mm, with tools).

We then find the single cylinder of 124 cm3, unchanged despite its transition to Euro4. 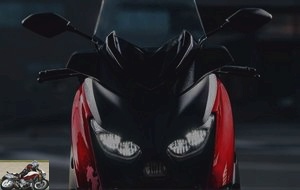 In terms of details, the dashboard has been completely revised to offer a new needle display for the counter and tachometer and an inverted LCD screen for the on-board computer. We will also note a larger disc at the front than the previous vintage, a reduced width to squeeze more easily into the lines and a larger tank. And for the more athletic, the ground clearance has been improved, going from 125 to 130 mm, largely sufficient in all circumstances.. 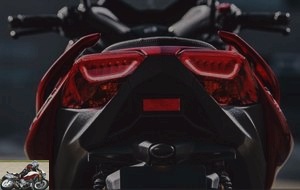 The Xmax is still as high with its saddle perched at 795 mm, almost the height of a trail! Suffice to say that the 1.70 driver will barely put his feet on the ground. Fortunately, despite a significant weight of 175 kilos, the general balance is excellent. Suddenly, we do not feel the weight and maneuvers at a standstill remains possible. Positive point of this saddle height, the handlebars fall naturally under the hands with a particularly natural overall position. Some scooters do indeed give the impression of having to raise their hands, which is not the case here..

The dashboard is still so readable, the Xmax having often served as a reference for other scooters. The large speedometer and tachometer are easy to read even for the elderly, as is the larger central digital screen, displaying all the necessary information and even more: clock, totalizer, partial trip, average and instantaneous consumption, traction control engaged , welcoming the driver with a gratifying "welcome on board" at start-up. 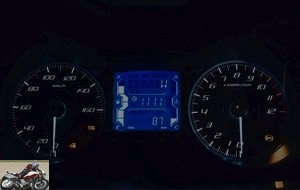 The command to see the different indications is done on the right stalk, once you have become accustomed to sometimes pushing, sometimes pulling. But these two methods allow faster access to different information.

Mirrors provide good back-view and can even be easily adjusted while driving to adjust vision.

No need for a key in the lock and the key in the pocket, you can just turn the central switch, the latter also allowing the saddle to be unlocked..

A switch that should not be left plugged in with the key in your pocket, otherwise you will beep; thus signaling that we forgot to lock it. 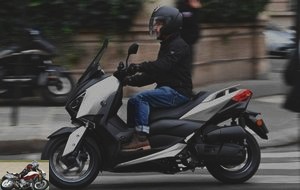 The Xmax is no exception to the ease of its predecessors. "Light", manoeuvrable and with an even reduced width, it weaves its way through traffic with ease. The mirrors never touch, making it easy to handle. We immediately find the engine character of the model, which despite unchanged performance (14.3 hp) offers excellent dynamics with an instant reaction to the request of the throttle. If it is still a 125, it is in the high range of performance, appreciable both at startup and in times, but also in terms of approval. It becomes the urban asset which makes it more than a utility vehicle with dynamic driving possible. On the other hand, it arrives at the limits of comfort on degraded pavement or with too many cobblestones.. 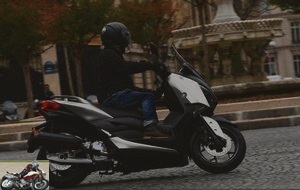 125 requires, the Xmax commits well on the highway to reach 115 km / h, then nibble a few kilometers hours then to reach 120 km / h on false flat. On the other hand, well launched and on a slight descent, it can exceed the symbolic bar of 130 km / h counter, even going so far as to lick a 133 km / h (counter). There is no doubt that mono should be able to express itself even better; once passed the thousand kilometers, compared to our models just running in. It is in any case at this maximum speed, that we appreciate the stability and handling, confirming the heritage of the 300 cm3 chassis. And who can do the most can do the least is checked again here. 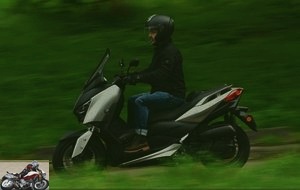 The Xmax 125 confirms its excellent layouts on small roads, with a precise front axle. The chassis never separates and gives the driver confidence to maintain a rapid pace possible, especially as the pickups are dynamic for the displacement.. 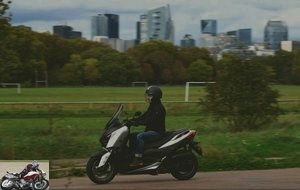 The Xmax 125 gained a larger rear disc of 245mm compared to 240mm previously, but it is mostly fitted with ABS as standard now. An ABS which is triggered quite easily at the rear and is felt in the handle but which allows however to go so far as to make the rear tire squeal. There is a slight dive in the event of heavy braking at the front but not excessively. In fact, apart from the rise in the grip, we forget it in the end, with an excellent overall feeling and strong power, but still controllable. A faultless therefore. 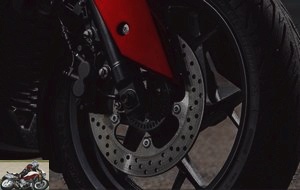 The wide and long saddle provides excellent seating. The topstitching and inlaid metal plates add a nice look. On the other hand, despite the two rear shock absorbers, the comfort is more sporty than GT, especially when the road is deteriorating or the cobblestones appear..

The Xmas has not changed the capacity of the boot, but has been rearranged to facilitate boarding. It is also equipped with lighting. So we always put two full / modular helmets plus a medium bag in the center. 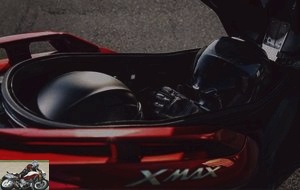 The central glove box has been replaced with two side boxes, one of which can be locked on the left and houses a 12V socket (but not USB). It’s convenient for recharging and deep enough to really use on a daily basis, while being able to accommodate the largest smartphones or GPS on the market.. 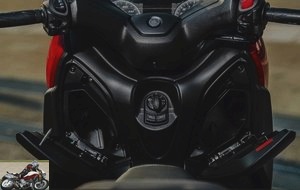 11.8 liters before, 13 liters now! The reservoir keeps growing. 125 requires, we tend to turn the handle harder than with a larger displacement, tending to increase consumption. If Yamaha announces a minimum consumption of 2.7 l, the average consumption of the test day rather turned around 3.6 liters per hundred according to the on-board computer, but should be able to drop to 3 liters in the center like the old one. model in case of more flexible use, knowing that some 125 on the market go down to 2.3 liters per hundred. But even in case of intensive use, it still offers almost 400 kilometers of autonomy. !

Finishing even higher, natural position, size at the same time fine for easier driving in town but plush to give the impression of a displacement more rewarding than a 125, dynamic engine, the XMax succeeds the pass of three to offer the best from Yamaha, while ensuring the proven reliability of a trouble-free engine and model. It remains its price, at 4,999 euros, up compared to the late 4,799 euros (but 4,199 euros without ABS), which places it in the upper range of scooters on the market, the only point that can lead to look at the competition unless you succumb to its lines and its charm, forgetting the price.

The technical sheet of the XMax 125