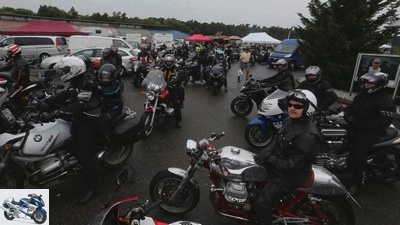 MOTORRAD Festival in Hockenheim
In the middle of the rain

The plan wasn’t bad. Use the race training of the MOTORRAD action team to offer readers in Hockenheim an all-round program from suspension tips to live music. But then the rain came …

Anyone who wanted to know what it means when relatively warm air masses are exchanged for cooler air masses with a south-westerly basic flow could do so in the course of the 28th. Nowhere better to experience June than in the paddock of the Hockenheimring.

MOTORRAD Festival in Hockenheim
In the middle of the rain

There, the imperial weather of the past week gave way to the start of the MOTORRAD Festival to a general weather situation, “which is noticeable until Sunday in heavy showers with heavy rain, hail, squalls and thunderstorms with local severe weather potential”. No question: if you get up with this weather forecast, it is best to lie down again – or at least plan your day without extensive two-wheeling activities.

It didn’t turn out that bad after all, but the view was probably enough to deter many from a trip to Baden. A brisk program awaited everyone who braved the weather. Around 1000 intrepid people came and passed the time between the dynamometer and the Sachskurve, between Mini Koch’s chassis workshop and the dealer mile, in order to succumb to the fascination of driving dynamics, at least in theory. Just like Michael Simons, who had specially traveled from Aachen with his Honda CBX. The 54-year-old’s sweetheart had already covered 160,000 kilometers with the first engine. The six-cylinder was not the theme of the Aachener, but the chassis: The choice of line was difficult. A case for mini cooks. Pressed, rocked, pulled over the stand – diagnosis: the steering head bearing, of course. And while you’re at it: it would help to change the fork oil. With 20 instead of 15 viscosity, which would give the thin CBX fork a little boost in terms of damping. Of course, he couldn’t promise miracles. But Simons hadn’t expected that either.

Just like Norbert Zimmer from his Fireblade on the dynamometer. He had come from Neuchâtel near Pforzheim with his family. Last but not least, to finally find out how much pressure his darling really has on the pots. 125 HP in the vehicle registration document, 124 on the roller dynamometer – Zimmer could be satisfied. And used the increasingly dry sections to get a taste of the racing atmosphere in the stands and in the paddock, which was spread by the more than 400 active race training participants and Triumph Challenge starters.

Everyone who wanted to hit the racetrack despite the changing track conditions was also taken care of. Regardless of whether it was two laps in a motorcycle parade on the GP circuit, an hour of trial training on the crossbar or even an hour of compact training with 20 minutes on the large course – everything was possible. You could also drive a car. With the AMG A45 and CLA45 in one-hour courses on the handling course. And those who held out until the evening were delighted by the “fat children” on the stage in the paddock with great cover versions. Then the rain didn’t do anything either – it was simply drowned.