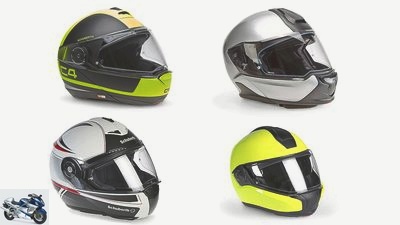 New flip-up helmets from BMW and Schuberth in comparison

New flip-up helmets from BMW and Schuberth in comparison
relationship

The BMW system helmet 6 Evo and the Schuberth C3 Pro were among the most successful flip-up helmets on the market for many years, not just in Germany.

And they were – like their predecessors – close relatives, because both were built by Schuberth in Magdeburg. But the relatives are now over: The new BMW flip-up helmet has a carbon fiber instead of GRP shell and will from now on be assembled in Italy. Schuberth continues to rely on “Made in Germany”. Before the two top dogs compete against each other in the next issue, there are quotes from those responsible.

New flip-up helmets from BMW and Schuberth in comparison
relationship

Why is there now a successor to the system helmet 6 or 6 Evo?

Our helmet cycles are always four years, then another four years for the Evo. These terms result from strategic product offer aspects as well as business background.

The main differences to the previous model?

You can see at first glance: The significantly larger field of vision, especially in the side area – that was also criticized in the last flip-up helmet test. The helmet shell of the System 7 Carbon is – the name suggests it – made of carbon. And only carbon. The new helmet itself is not significantly lighter than the system helmet 6, but the helmet shell could still be significantly lightened – with improved impact performance. Due to the lighter helmet shell, the helmet weight moves more towards the center of the head, which means there is less moment of inertia and the neck muscles are relieved. The helmet is super balanced and is much easier to wear.

Why only with a carbon bowl?

In our opinion, if you put the focus of helmet shell development on maximum safety performance, you can hardly ignore carbon. You can see that in the chassis of Formula 1 vehicles, which are made from carbon.

What carbon disadvantages are there, if any??

Sure, there are carbon downsides too. First and foremost, there are the very high costs of the base material carbon. The fiber price can only be reduced through high purchase volumes. Of course, we also benefit from our automotive colleagues. A carbon helmet requires special aeroacoustic measures because carbon has little self-damping due to its very high stiffness. The effect of self-damping can easily be simulated by snapping a wine glass with your finger or knocking on wood with your finger. The glass will always produce an audible tone due to its lower internal attenuation.

Why is Schuberth no longer a supplier?

We have had a successful collaboration with Schuberth for six generations of flip-up helmets. However, we wanted to develop independently technologically, especially in terms of helmet shell development. And that with the inclusion of our extensive carbon know-how in our company, especially in the automotive sector. Of course, we really wanted to use this know-how for the new helmet. With its own fiber optic technology, Schuberth is consistently taking a different approach.

Who is the new supplier and why?

Dainese can provide us with the best overall package. We are of the opinion that in the meantime it is no longer a matter of getting everything according to the principle “under one roof”, but rather we manufacture the helmet shell and other components where we believe we will get the best result. For example, the System 7 Carbon helmet shell is made by a manufacturer who produces 90,000 carbon bicycle frames per year for the most well-known companies and is also an official development partner of Airbus. (Editor’s note: Said helmet shell supplier is based in China, the interior fittings come from Thailand, the shock-absorbing EPS inner shell from Italy, where Mavet – known for AGV – also does the final assembly).

How many people were involved in developing the new helmet and what were the greatest challenges??

In the three years of development, a total of around 28 people worked across teams on the helmet project, six of them in the design alone, three surface modellers, two graphic designers for the decors and three constructors. Not to forget the wind tunnel team with aerodynamicists and acousticians and employees who took care of suppliers, logistics, quality assurance and process planning. The greatest challenge was marrying the four-joint kinematics of the chin part, proven from System 6, with a mechanism that enables the chin part to be removed easily, quickly and without tools – the System 7 Carbon is also homologated as a jet helmet!

Why is there now a successor for the C3 or C3 Pro?

After five successful years of C3 Pro and ten years of C3, it was time to bring a C4 with a contemporary design and state-of-the-art technology, especially a revolutionary communication technology, onto the market. Over a third of Schuberth customers use a C3 Pro with the Schuberth communication system. So it made sense to integrate this even further into the helmet and make both assembly and use even easier for the customer.

The main differences to the previous model?

Of course, the new design and the compact, aerodynamically sophisticated shape – when closed, the C4 is hardly recognizable as a flip-up helmet. Then there is the “seamless” and thus even more comfortable interior and of course the standard equipment with a microphone, two loudspeakers and an antenna as well as all the cabling, which is very easy to upgrade – keyword “plug and play” – with the optional SC1 communication system from Sena enables.

Why is there no carbon bowl?

Our unique DFP process (editor’s note: DFP stands for “Direct Fiber Processing”) for manufacturing our helmet shells makes them extremely easy and safe. A process that is similarly used in aircraft and shipbuilding. The weight advantage expected by everyone of a carbon helmet shell is therefore not available in a direct comparison. In terms of safety, a carbon helmet shell also offers no advantage over our DFP technology.

How long did the development take and how many employees were involved?

We started thinking about the C4 back in 2012 with the appearance of the C3 Pro. In autumn 2014 we had our first discussions with Kiska (editor’s note: among others, “KTM house designer”) about the C4 and started the design. At the same time, we started with the basic developments for interior fittings, the associated aeroacoustics and the integrated communication system. Over the past two years, over 25 colleagues have worked on the C4 under the overall project management of Sven Bartels. Around 20,000 person-hours went into the entire development. In the air and acoustics lab alone (editor’s note: this refers to the in-house wind tunnel and climate test bench), more than 650 person-hours were spent. This means that two people did nothing more than examine and optimize the acoustics, aerodynamics and climate comfort (rain and ventilation) for two months.

The greatest challenges and possibly setbacks in development?

The biggest challenge was certainly to build on the really great C3 Pro. And of course to stick to the tight schedule and meet the high expectations of our customers – and of course ourselves. There were no real setbacks, otherwise we would certainly not have been able to have the helmet in stores as planned for the start of the 2017 season.

Why is there no P / J homologation for the C4, i.e. approval as both an integral and a jet helmet?

We are of the opinion that the P / J approval for a flip-up helmet is not the correct approval. In general, a vertically open chin part represents a safety risk. When the chin part is open, the surface of the helmet increases significantly. As a result, the risk of injury increases enormously because the driver can get caught somewhere with the opened chin part during a fall. This is why Schuberth flip-up helmets are only approved as helmets with a closed and protective chin section. We do not consider a removable chin part to be useful either. Such a helmet is always a compromise, both visually and technically. We have other products for this, such as the M1.