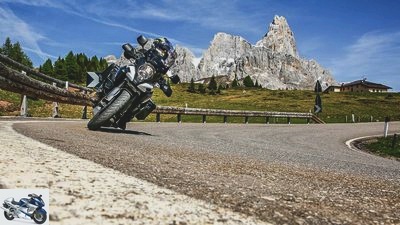 The Italian province of Trentino has imposed stricter speed limits on numerous passes popular with motorcyclists.

Noise measurements should also come across the board. There will also be more controls.

Since July 25, 2020, a new speed limit has been in effect on some mountain and mountain pass roads in Trentino, which limits the maximum speed for all vehicles to 60 km / h. On some sections there is even a speed limit reduced to 50 km / h.

This new regulation was approved by the Trentino provincial government on July 24th and put into effect immediately. This is intended to increase safety and reduce the number of accidents. It is also a response to numerous complaints and submissions from residents.

The speed has also been further reduced on some of the Dolomite passes popular with motorcyclists. Tempo 60 applies to everyone on the Sella Pass, the Gardena Pass, the Pordoi Pass and the Rolle Pass.

Additional speed 60 zones for motorcyclists only have been set up on state road 42 on the Tonale pass and on state road 31 on the Manghen pass.

The new regulation, which the Trentino governor Maurizio Fugatti sees as a kind of test balloon, applies initially for the summer season until a new regulation is introduced.

Just a few days after the introduction of various new speed limits in the province of Trentino, Italian media are also reporting planned nationwide noise measurements. The police had been specially equipped with an appropriate measuring device for this purpose. After being too fast, too loud road users are now being targeted by law enforcement officers. A special focus here is on manipulated exhaust systems. Abnormal machines should also be inspected more closely.

On the first weekend in August alone, the police checked around 700 motorcyclists in Trentino. A total of 120 bikers were fined for a wide variety of traffic violations. In view of these numbers, the controls are to be intensified even further.

The neighboring province of South Tyrol wants to increasingly rely on speed controls, especially on weekends, in order to pull speed offenders from traffic. At the same time, South Tyrol relies on the survey of the traffic flows on the pass roads as well as on noise measurements.

Italy is trying to lower the number of accidents with further speed limits. Now the Trentino region has strictly limited numerous passes popular with motorcyclists.