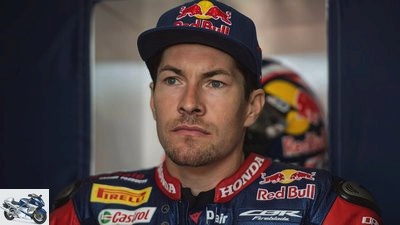 Nicky Hayden had an accident, opponents of the accident convicted

In May 2017, the American Superbike star and MotoGP World Champion from 2006 had a fatal accident in Italy in a road bike accident.

Now the driver involved in the accident has been sentenced to one year probation.

A court in Rimini has sentenced the 30-year-old driver, who last year caught GP driver Nicky Hayden on his racing bike, to one year probation. Hayden died five days later as a result of the accident.

The accident occurred on May 17, 2017 in Misano near the Italian Adriatic Sea. 36-year-old Nicky Hayden, MotoGP World Champion 2006, was riding a racing bike and ran over a stop sign at around 20 km / h. The driver on his way to work could no longer avoid him, Hayden was thrown against the windshield and suffered such serious injuries that he died five days later. The court in Rimini apparently saw a certain complicity on the part of the driver because he was traveling at 72 km / h instead of the 50 km / h permitted on this road. In addition to the one-year prison sentence, which is suspended, the court also ordered that his driver's license be revoked. As is customary in Italy, the detailed reasons for the judgment will only be published in the course of the next three months.

The three experts – one hired by the Hayden family, one from the prosecution and one from the defense – disagreed as to whether the accident would have been less severe if the driver had adhered to the speed limit. According to the defense, Hayden would not have survived an impact at 50 km / h. She wants to appeal the verdict.

Another trial awaits the driver, who suffered a severe shock in the accident and who is still receiving psychological treatment to this day. Nicky Hayden's relatives want to sue him for six million euros in damages.

Update from May 22nd, 2017, 6:00 p.m.: As various media reports unanimously, Nicky Hayden succumbed to his injuries.

Update from May 22nd, 2017, 10:00 a.m.: Five days after the accident, Nicky Hayden (35) is still in an artificial coma. Doctors now call his condition stable, but the damage to the brain is very serious. Nicky's brother Tommy Lee Hayden, himself a former racing driver, has sent the medical records to US specialists and is now hoping for their help. According to the Italian media, a switched-on iPod was found at the scene of the accident. Apparently Hayden was listening to music on the racing bike with it. An expert should now investigate the exact course of the accident.

Update from May 18, 2017: Even 24 hours after the serious road bike accident, the Italian doctors do not give the all-clear. Nicky Hayden is still in acute danger. His situation did not improve overnight. The American racing driver is in an artificial coma.

Nicky Hayden was seriously injured in a bicycle accident in Italy and is in critical condition in the intensive care unit in the hospital in Cesena near Rimini. Hayden, MotoGP World Champion 2006, had an accident on Wednesday, May 17, 2017, around 2 p.m. near Misano Adriatico, where he was riding his racing bike. Apparently, the 35-year-old was hit by a car at an intersection, hit the windshield with full force and was thrown over the roof.

The local police are still investigating the exact course of the accident. Hayden was immediately flown by helicopter to the hospital in Rimini and from there to the larger clinic in Cesena. According to the doctors, his condition is extremely critical. The American suffered a traumatic brain injury and several complicated fractures.

Hayden, who switched from MotoGP to the Superbike World Championship in 2016, only started the race in Imola on Sunday. During Thursday morning, the mother and brother of the racing driver known as the “Kentucky Kid” are expected in Italy.

Nicky Hayden drove a total of 218 GP races over the course of his career.