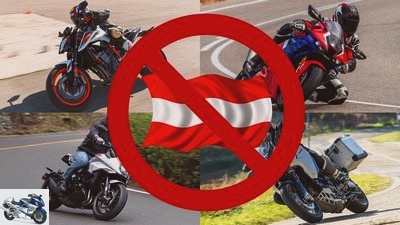 The Tyrolean state government is extending the noise driving bans for motorcycles with over 95 dB stationary noise for the 2021 season and the following years. They should be from 15.4. until October 31 Apply in 2021. The routes remain the same, as do the general conditions. A first court ruling also supports the driving ban.

What was to be feared is now becoming a reality: The Tyrolean state government is also relying on noise driving bans for motorcycles on certain mountain passes for the 2021 season and the coming years. In addition, according to the Deputy Governor Ingrid Felipe, motorcycle noise is currently being measured on other routes. This could result in further driving bans.

Here is the wording of the order: “Due to the considerable noise pollution for the population living in the Reutte district, from the year 2021 from April 15 to October 31 of each year, driving bans for particularly loud motorcycles > 95 dB (A) issued:

The driving ban applies from April 15 to October 31 of each year.” 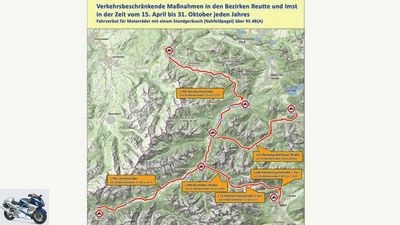 The policy is based on an evaluation of data from the previous season. In addition to the traffic data collected, 250 people were interviewed by telephone on behalf of around 10,000 residents in November 2020.

Accordingly, the number of motorcycles in the Ausserfern area has been reduced by around 36 percent. This resulted in a noise level reduction of 2 dB. Accordingly, a clear majority of those surveyed have a positive view of the driving ban. At 29 percent, the proportion of those severely annoyed by motorcycle noise is still high, but has more than halved compared to the 2019 surveys. The greatest reduction was observed at the Hahntennjoch. Motorcycle traffic there halved in 2020. However, 46 percent of those surveyed admit that this also resulted in losses in tourism. A focus group set up by the Tyrolean provincial government, which analyzed the economic effects, could not confirm these fears. However, the study authors do not want to attribute the results to the driving bans, the corona pandemic also had an enormous impact here. An exact allocation is not possible.

Herbert Gassner, Managing Director of Moho – Motorradhotels Osterreichs, also emphasizes that the 2020 season does not allow any realistic conclusions to be drawn due to the special Covid situation “success” 2020 is based on distorted and unusual market conditions.

“The results of this evaluation were to be expected and do not surprise me,” explains Karin Munk, General Secretary of Arge 2Rad. “Around 70% of motorcycle tourists in Tyrol come from Germany. To the chagrin of the local tradespeople, many groups canceled – partly also for corona reasons – so, although perhaps only one motorcycle had over 95 dB (stationary noise), they did not come at all,” so Munk continues. It is obvious that the reduced frequency also leads to a reduction in noise emissions, but has nothing to do with the entered near-field level per se. Motorcycles legal according to EU guidelines are punished, illegal, tuned motorcycles are rewarded. And it is these that define the subjective perception of noise.”

Manufacturer statements on the subject of motorcycle noise

The regional administrative court of Tyrol has now the complaint (File number: LVwG-2020/37 / 2639-17) of a motorcyclist as “unfounded” rejected, who wanted to take action against the driving bans. Georg Sedlmayr from Wattens, who is also on the extended board of the Moto interest group (IG), drove into the no-driving area on June 13, 2020 with his motorcycle (first registration 1986; registered stationary noise: 100 decibels). Sedlmayr did this consciously with the aim of overturning the controversial driving ban. Sedlmayr was checked and received a € 220 fine, which he wanted to take to the regional administrative court. Sedlmayr’s complaint was dismissed and an appeal was not allowed. In terms of content, the regional administrative court held that the relevant ordinance was not only properly published, but is also neither equality nor illegal. It was also made clear that the driving bans serve to protect the population from noise pollution – from the court’s point of view, this interest outweighs the interests of bikers in unhindered use of the relevant sections of the route. Now it is only possible to go to the Constitutional Court.

MOTORCYCLE spoke to Karin Munk, General Secretary of Arge2Rad (umbrella association of Austrian two-wheel importers and the two-wheel industry) on the subject. 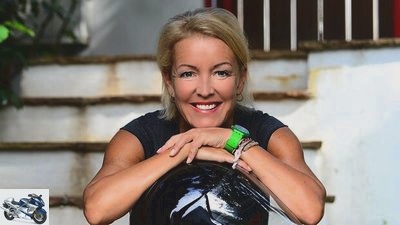 Does the Arge want to take action against the closures and if so, how?

Munk: As I said, it is not a matter of closures, but of a driving ban for motorcycles that have registered more than 95 decibels of stationary noise in the registration certificate.

The aim of Arge 2Rad will continue to be to give all legal motorcycles access to all streets, to guarantee the local traders a secure future, taking into account the needs of the residents. For this, it is necessary to raise the awareness of individual motorcyclists and to have massive controls on the prohibition of illegal cultivation by the executive. Arge 2Rad and its partners guarantee these foundations for a sustainable reduction in pollution levels through campaigns and through close cooperation with the Ministry of the Interior.

What is to be made of the fact that the EU Commission has allegedly declared the u95 blockages to be legal?

Munk: We do not know the applicant and neither do we Content of the complaint. However, we must assume that the essential aspects (non-equality, discrimination, inviolability of property, etc.) have not been taken into account in terms of content. Thus, the statement cannot really be evaluated.

It is essential for the Commission that this is a locally and temporally limited ban. Any expansion (also in other federal states) must be followed by a new assessment. The European Court of Justice is responsible for assessing legality and conduct, not the Commission.

It is to be feared that other Austrian federal states will follow the Tyrolean example?

Munk: We cannot rule that out. However, we try to be active in advance and to raise awareness. With this regulation are according to EU guidelines legal motorcycles punished, illegal, tuned motorcycles are rewarded. And it is these that define the subjective perception of noise. So there are other measures to be pushed.

Readers keep writing to us that they want to boycott Tyrol as tourists. What do you think about?

M.unk: Everyone should do what they want. In the interests of the local traders, I would of course like the tourists to come anyway, because otherwise they would naturally strengthen the regulation by staying away – less frequency equals less motorcycle noise – and the tourist businesses can spoon up their soup. So in terms of good customer loyalty and even friendships with individual companies, I would of course wish for many German motorcycle tourists in 2021.

In Germany, too, the rifts between motorcycle opponents and motorcyclists are getting deeper and deeper “Motorcycle noise” plays a central role in this. Do you have an idea how an understanding between the two sides could still be achieved?

Munk: There is an Austrian proverb that means: By talking, people come together. We have to empathize and understand each affected side and look for common, sustainable solutions: we that are the community, industry, trade, the executive and politics.

Tyrol will continue the noise driving bans for motorcycles with over 95 db of stationary noise on certain pass routes in 2021 as well. This means that many motorcyclists are still excluded from driving popular routes in Tyrol. In the long term, only quieter motorcycles and a rethink among the drivers, who are still careless about the issue of volume, will help. Whether it makes sense to limit it by means of stationary noise remains questionable.