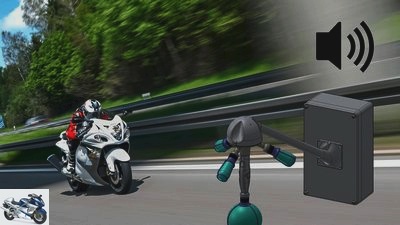 A system of audio sensors called “Meduse” is intended to track down the drivers of noisy motorcycles and cars.

The system was developed by the French environmental organization Bruitparif; It will be tested on public roads from the end of September in Paris, in the suburb of Villeneuve-le-Roi and in rural areas near Chevreuse. Four microphones pick up the noises from the environment and forward them to a computer for analysis.

The optical sensors of the system should be able to assign a license plate to the noise sources. In principle, according to the developers, Meduse is even able to automatically send fines.

But it is not that far yet: On the one hand, there is currently no legal basis for the official installation, on the other hand, the initiators lack a reliable scientific database on the noise level of different vehicles in different traffic situations. This is exactly what is to be created on the test tracks. If the project is successful, Meduse could officially be used in 2022.