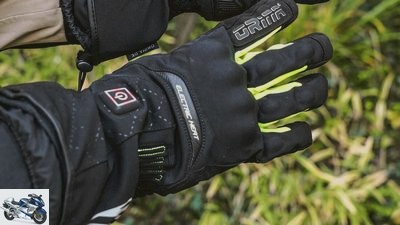 The heated Orina Tesla motorcycle gloves are designed to keep your hands warm, especially in winter. The practical test reveals how well this works.

Perhaps climate change will ensure a mild climate in winter in the future, but until that happens, we motorcyclists will have to look for other solutions during the cold season.

For example heated grips – or after heated gloves, such as the winter gloves from Orina named after the electrical engineer Nikola Tesla.

The Teslas do a very good job at temperatures between -5 and +5 degrees Celsius, keeping your hands at a comfortable temperature. The battery capacity lasts around three hours at the medium heating level and around half at the highest level, although the increase in heating output does not increase too much. In addition, the battery life was very different here. One held an hour and the other an hour and a half.

The gloves are waterproof and windproof thanks to a membrane; in the test, they were completely unimpressed by a 35-minute ride in the rain. The batteries are nice and flat and the cuffs are so clever that they can be worn both over and under the jacket sleeves. But there is also criticism. The back of the hand is mainly heated, and the illuminated switches do not warn of a battery that will soon be empty – the gloves then simply go out. The insulating effect of the gloves themselves is then rather average.

MOTORCYCLE Rating: 4 stars out of a possible 5

In the first test, the heated gloves from Orina were quite convincing. The solid heating performance was particularly pleasing. However, the different battery runtimes caused astonishment and accordingly deductions in the evaluation – nevertheless, the gloves made a good first impression overall.