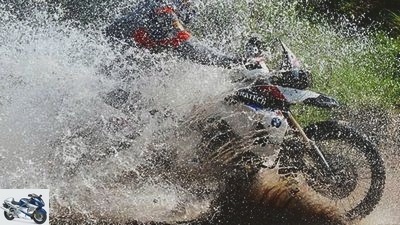 Out and about: BMW GS Trophy in southern Africa

Out and about: BMW GS Trophy in southern Africa
Motorcycle adventure with the BMW F 800 GS

A thirst for adventure, a talent for improvisation, driving pleasure, team spirit and a keen interest in the country and its people. This is just as much a part of motorcycle travel as it is for participating in the BMW GS Trophy.

The bull elephant furiously chases the pack of 800s through the South African bush. These motorcycle intruders don’t seem to know who’s in charge here in the Phinda Game Reserve. Even if the six-ton ​​elephant is still young and is only running a mock attack, it is now clear to all participants that the trophy is not a race, but a real adventure. A great communal experience that is spiced by challenge, sweat, curiosity and above all by fun. Now only a team can win, not a single driver. The participants have to reckon with borderline experiences, despite the complex organization in Africa not everything can be planned meticulously.

Out and about: BMW GS Trophy in southern Africa
Motorcycle adventure with the BMW F 800 GS

Tomm Wolf’s organizational team spent eight months exploring and preparing a 2000 kilometer loop through South Africa, Swaziland and Mozambique. A week of sand, gravel, mud, river crossings, single trails, asphalt with potholes, deep enough to swallow a motorcycle. The start and end point is Touratech South Africa in Johannesburg. The daily stages are a maximum of 340 kilometers. It is planned that two teams that change daily will be led by a marshal to the twelve special stages. They can be done with or without a bike.

Equipment specialist Touratech prepared 50 brand new BMW F 800 GS and ten 1200 GS with numerous protective and optimizing add-on and conversion parts for the Africa adventure. Ten three-man teams from 13 nations start on these motorcycles: USA, Canada, Sweden, Norway, Finland, Germany, Austria, Switzerland, Great Britain, Italy, Spain, South Africa and Japan. They each have a journalist on an 800 with them. Mechanics, doctors and film teams sit in support vehicles. The different mentalities and cultural peculiarities that clash in borderline situations offer a lot of potential for conflict. There are the loud, impulsive Spaniards on the one hand and the quiet, always friendly Japanese on the other side of the extremes. The Nordic team is a prime example of the classic communication problem: Finns, Norwegians and Swedes only speak their mother tongues, the team members have to speak English. 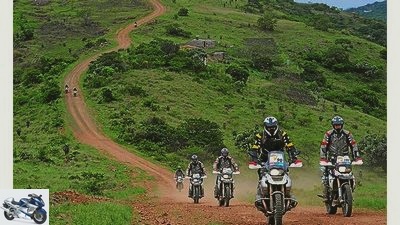 The enthusiasm for motorcycling unites all teams. Overcomes all cultural, mental or physical differences and connects in the toughest tests. Once, two teams each have to dig their way through 30 kilometers of deep sand to the fishing village of Ponta do Ouro under the scorching Mozambique sun. Points are only awarded if everyone rolls over the finish line together in the end. Good fitness and sand driving technique are one thing. Self-discovery, the struggle to become a good team, which on top of that cooperates with someone else, is another. South Africans and Japanese make it together, the Africans have to dig up the Asian sand newbies permanently after falls. “The hardest thing I’ve ever experienced”, says one. At the finish, everyone has earned the jump into the Indian Ocean. Not the fire jellyfish.

What matters in a rally that is not about speed? Driving skills, dexterity, navigation skills, team spirit, strategies, strong nerves. So a challenge to the weaker self. The reward is interpersonal surprises. Rivals become friends at the evening campfire talks. Driving in magnificent surroundings is also rewarding: between elephants, giraffes, lions, rhinos, buffalos and hippos – pure African life. Waving children playing in the dirt, simple mud huts with corrugated iron roofs, women gracefully balancing heavy loads on their heads, mangoes, bananas and papayas, herds of goats and ox carts on dusty paths. Free condoms are available on the border with Swaziland. Because of the high risk of AIDS. In the end, the UK team wins: two farmers and a chain-smoking construction worker. If such guys can dominate the international GS Trophy, it becomes clear: This is not a race, but rather an extreme travel adventure. 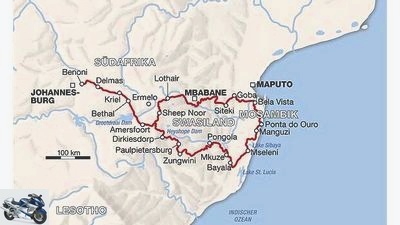 South Africa, Swaziland and Mozambique in southern Africa are exotic destinations that have a strong adventure character even without a trophy. The poverty in Mozambique requires empathy and sensitivity.

Travel time:
South Africa and Swaziland can be visited all year round without any problems, for Mozambique the time from April to October is best.

Motorcycling:
South Africa has a well-developed network of roads and petrol stations. In South Africa, Swaziland and Mozambique there is left-hand traffic. You can import your own motorcycle with a Carnet de Passage. The cornerstones of a three-country tour, which is based on the off-road routes of the Trophy, can be: Touratech South Africa in Johannesburg, “Country Trax” at Amersfoort in Mpumalanga (www.countrytrax.co.za), Ghost Mountain, the Pongola and Phinda game reserves and the village of Ponta do Ouro. 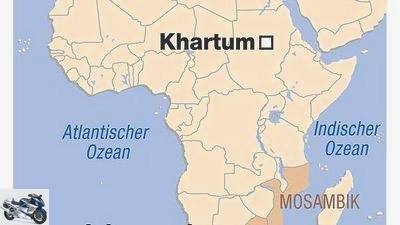 Stay:
Accommodation in all categories and price ranges can be found in South Africa. Even the smallest nest has a bed & Breakfast. Tourism is still in its infancy in Mozambique.