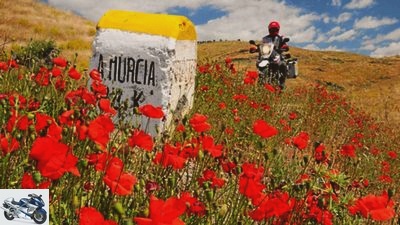 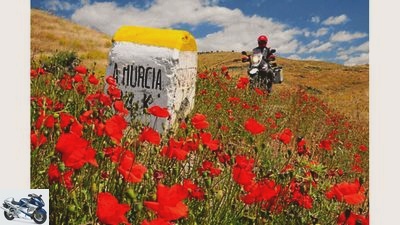 1/14
When it gets cold in winter, there are wonderful opportunities to escape – for example in southern Spain to Andalusia. There are fantastic curves and grandiose structures here. 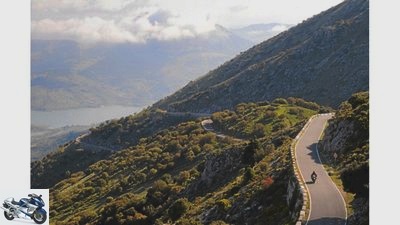 2/14
The Puerto de la Paloma is the craziest pass all around. 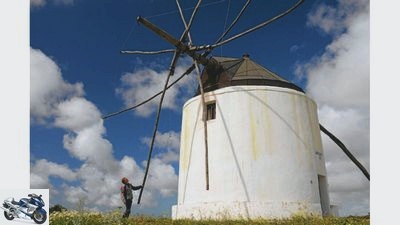 3/14
Over and over: the old windmill in Vejer de la Frontera works
no more. 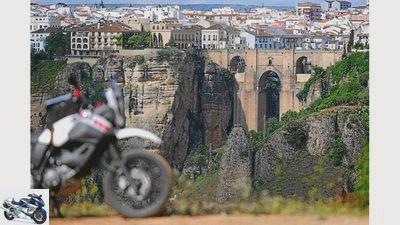 4/14
The historic Puente Nuevo bridge is the highlight of the white city of Ronda. 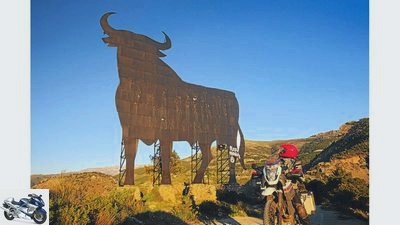 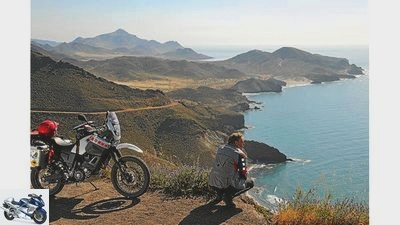 6/14
At Cabo de Gata, the Mediterranean coast is almost untouched. 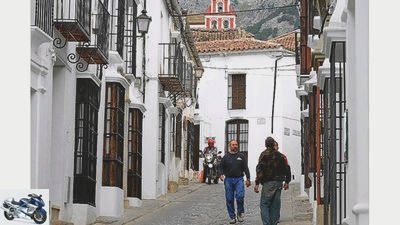 7/14
Grazalema is one of the “pueblos blancos”, the white villages of Andalusia. 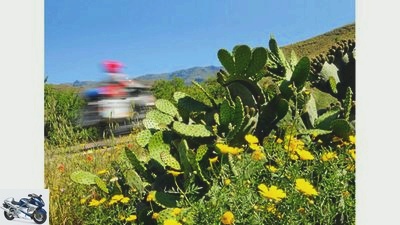 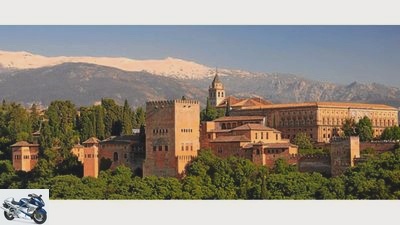 9/14
It is one of the most impressive buildings in Europe: The Alhambra. 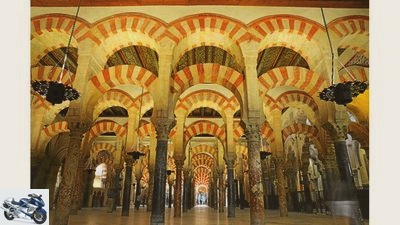 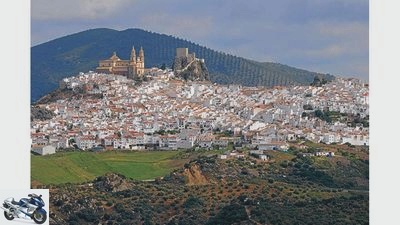 11/14
In the white village of Overa, the Christian church and the Moorish castle are now peacefully facing each other. 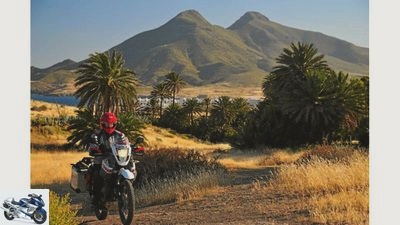 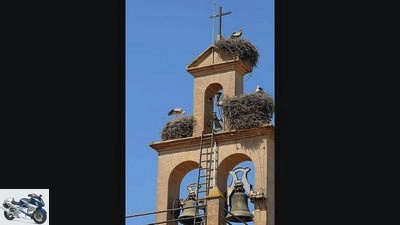 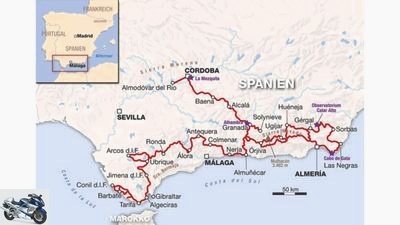 14/14
The route through Andalusia.

Out and about in Andalusia

Andalusia, the southernmost region of Spain, offers great cinema: fantastic curves through the sierras, grandiose Moorish buildings such as the Alhambra and La Mezquita and African flair in the Cabo de Gata Nature Park.

Cabo de Gata, Andalusia, 22 degrees. Finally arrived in spring. After the long winter, the urge to ride a motorcycle in the south was huge. And didn’t our geography teacher say at the time that spring always comes from the southwest? So off to Andalusia, forget about winter. What is child’s play in the Cabo de Gata Natural Park. Nowhere else in Spain is it drier and more African. Brown volcanoes, tall yellow grass, agaves, cacti and date palms; the small towns consist of snow-white cubic stone houses, dusty slopes end on deserted beaches. An area perfectly created for relaxation and warmth. Hippies and bon vivants used to gather here, a few stayed, rolling joints and listening to the waves.

The next asphalt curves are not far, as the Sierra de los Filabres rises barely 40 kilometers north over 2000 meters. The Michelin map beckons with an ensemble of yellow and white lines, a maze of slopes and streets. Even those who apply alpine standards will ennoble this region with the maximum grade. Hardly anywhere else in Andalusia is there this fascinating mix of streets with addictive potential, loneliness and great scenery. One of the most spectacular passes in Spain, the Alto de Velefique, begins in Velefique, a tiny village at the foot of the Sierra. 1050 meters high, the best curves and bends and a breathtaking view of this work of art Iberian road construction from above. I don’t see a vehicle for an hour.

I drive the Tenere further through the fragrant pine forest and up to Calar Alto, the highest mountain in the Sierra at 2168 meters and the location of the largest European observatory. Not bad, the view from here: In the south the ugly, almost endless greenhouses spread out, reminiscent of huge mattresses for the landing of aliens, and far to the west the snowy peaks of the Sierra Nevada tower up, my next destination. 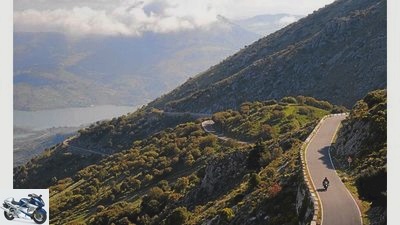 The Puerto de la Paloma is the craziest pass all around.

A narrow, old and winding road connects the small mountain villages on the southern edge of the Sierra, the Alpujarras altas. In Capileira, an ancient place with steep and narrow streets, Europe’s highest pass road begins up to Mulhacen, 3481 meters high. In 1989, however, the Sierra Nevada was declared a nature park and the road was closed. After all, I can still climb 13 completely legal kilometers up the mountain from Capileira, the last eight are unsurfaced. It’s worth it, because there is nowhere closer to the mountain giants Veleta and Mulhacen by motorcycle.

The total contrast to the silence of the Sierra Nevada is Granada, the lively, hectic and, thanks to the incomprehensible one-way street system, often annoying city with the absolute highlight, the old Moorish ruler’s palace Alhambra. Every year, three million visitors want to feel the atmosphere of the Arabian Nights. But tickets can usually only be obtained well in advance. The entire week is fully booked. So I only have the view from the Mirador San Nicolás over to the Alhambra.

If I’m not lucky here, then maybe in the Mezquita of Cordoba, the less overcrowded second Moorish building in Andalusia with a Unesco World Heritage award. I am there early the next morning, immersing myself in the mystical semi-darkness of the gigantic La Mezquita mosque, which quite a few describe as one of the world’s most beautiful buildings. 856 marble columns, all connected by arches, support the roof in perfect harmony. The 1200 year old forest of oriental pillars enchants me immediately, makes you forget time. But there is a warning sign. In the middle of the mosque is a bombastic cathedral, a show of power by the Christians after the Reconquista. The Christians destroyed the high culture of the Moors, were barbarians towards the educated Arabs, who for the most part could neither read nor write, who ruthlessly plundered, murdered and chased away everything foreign, authorized by the Pope. King Ferdinand V, who allowed the cathedral to be built in the 16th century, realized his mistake far too late: “You built something that could have been built anywhere. And you destroyed something that was unique.” 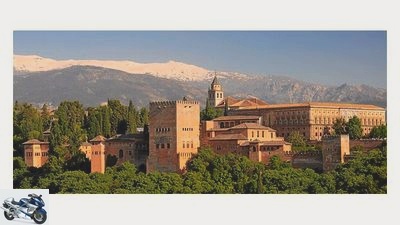 It is one of the most impressive buildings in Europe: The Alhambra.

Words that haunt me long after I grabbed the Tenere and left Cordoba southwards. Course Mediterranean, through endless olive groves. It only gets exciting when the A4050 meets the Sierra del Chaparral, bizarre white limestone cliffs, deep gorges and grandiose views of the sea. 1200 meters in altitude and what feels like 500 curves to the Costa del Sol – a dream! Costa del Sol – the reputation of this coast, raped by concrete buildings of all ugliness, is legendary. Nevertheless, between Almuñecár and Nerja I discover an almost untouched stretch of coast with old watchtowers and uninhabited bays. But from Torrox the concrete empire strikes back mercilessly: endless and faceless places with Lidl and Aldi, urbanizations that have been in hibernation for nine months, far too much traffic, built-up views and destroyed nature. All that remains is to flee inland, to the Sierras near Ronda.

Barely ten kilometers beyond the coast I dive back into another Andalusia, follow perfect motorcycle routes that wind through the green mountains and pass them “pueblos blancos”, snow-white historical villages, attractions of this region. One of them is Grazalema, the rainiest place in Spain at the foot of the Sierra of the same name. 2500 millimeters of rain per year heave Grazalema into the top ten of Europe’s rain holes, next to as notorious as the Scottish Highlands.

Over the Puerto de las Palomas, the most beautiful pass far and wide, I swing to Zahara, a picture-book village on the reservoir of the same name. White houses stick to the rock on which a Moorish ruin sits enthroned. The Tenere is almost too fat for some streets. With the clutch dragging, I balance the load over steep cobblestone paths up to the plaza. The cafe with its delicious tapas comes in handy.

Too bad that it is still so fresh in the sierras so early in the year. I don’t find spring here. So I give the Yamaha the spurs, hold a southwest course and turn to the southernmost point of the European mainland, to Tarifa. On the left the Mediterranean Sea, on the right the Atlantic Ocean, 14 kilometers away across the Strait of Gibraltar is Africa. Tempting. Lukewarm wind rushes through the palm trees on the beach. An XXL portion of ice cream wouldn’t be bad now. After all, it is spring in Andalusia. 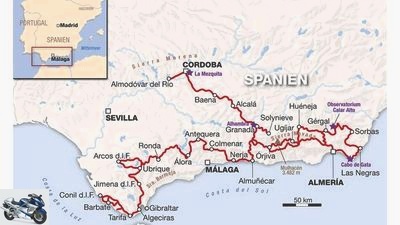 Andalusia attracts with the highest mountains in Spain, motorcycle routes with an addictive factor, historical buildings of world renown, African flair and warmth when it is still snowing elsewhere.

getting there:
From Cologne to Tarifa there is an easy 2700 kilometers. It is less stressful and more convenient to cover part of the route with the DB Autozug, which runs weekly from various German train stations to Narbonne in southern France. For example, a one-way trip from Dusseldorf costs from 296 euros per person and motorcycle, depending on the season. For more information, call 01805/241224 or www.autozug.de.

Travel time:
Andalusia is almost a year-round destination. The temperature differences between the sea and the sierras are considerable, with most of the rain falling in the winter months. In midsummer in the interior, especially in the hottest region on the Rio Quadalquivir, over 40 degrees must be expected. The best months to travel are April, May, September and October.

Stay:
In summer, hostels and hotels are mostly overcrowded, and even in the off-season it is anything but easy to find accommodation, especially away from the few tourist centers. The few guesthouses and campsites sometimes don’t open until mid-May and tend to close as early as October. The situation is better in the larger towns and along the coast. In the picturesque Cabo del Gata region, original accommodations can be found in Agua Amarga, Las Negras, Rodalquilar, Los Escullos and San Jose.

literature:
The Andalusia travel guide from Michael-Muller-Verlag for 22.90 euros turned out to be an almost omniscient companion: even a usable map is included. The Andalusia Handbook from Reise-Know-How publishes for 19.90 euros in the same league. A version is even offered for download here. To get in the mood at home, the DuMont Picture Atlas of Andalusia is suitable for 8.50 euros. The Michelin sheet number 578 on a scale of 1: 400,000 is recommended as an overview map. The Michelin regional newspaper 124 Costa del Sol on a scale of 1: 200,000 is much more detailed. Both sheets cost 7.50 euros each.