A practical large-wheel scooter, efficient in town and sober with its Smartmotion engine !

Three point one percent. In France, this is the share of large-wheeled scooters in the overall scooter market.. Suffice to say peanuts. Suddenly, faced with a commercial issue that borders on ridicule, the Franco-Indian teams of Peugeot Scooters and Mahindra (the Indian parent company owns 51% of the historic French manufacturer, when the PSA group kept 49%) introduce each other to belote and cricket, sauerkraut and curry and decide together how to optimize their RTT to death. Because, frankly, breaking out for 3.1% of the market is really disheartening. And yet, we have not given you the full extent of the slump: in Belgium, it’s downright 0.4% !

But times have changed: while some claimed that the Zambezi was not worth the Corrèze, it turns out that the economy has evolved and that France does not make the world. After such an introduction, therefore, comes the time for counter-examples: in Italy, 69.9% of the market consists of large-wheeled scooters. In Spain, it is 19.9%. In Greece, it is important, in Algeria too. In Europe, they represent more than 40% of the market. And in Asia, where Peugeot is present, we hardly see that.

It changes the outlook and not just a little. Suddenly, Mahindra told Peugeot that their RTTs, they would take them in 2030. So it worked. Well. 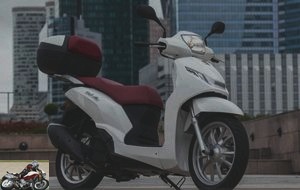 The mist rises on a small street in the heights of Paris. Under the thick layer of clouds, you can hardly make out the Basilica of Montmartre. Between two souvenir shops, three "historic" restaurants, a junk Mime Marceau and a bus of Asian tourists, a Peugeot 3008 slices through the wind. Unless it is the new 5008 in GT Line finish. But minute, no, what is it? The pupil dilates and the eye must rework its focal length. 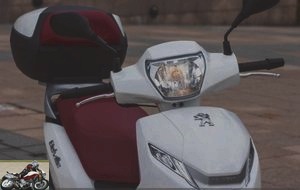 The lighthouse of the Belville 125 Allure 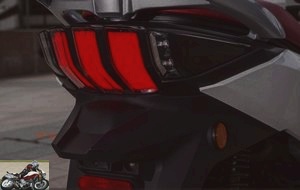 The rear light is LED

Peugeot Scooters scooters will therefore be more easily recognizable in traffic. Although: built in China, this Belville is in fact based on the technical platform of a SYM Symphony ST seriously revised by Peugeot Scooters, with a French engine and settings reworked in terms of braking, suspensions. And the equipment is different. 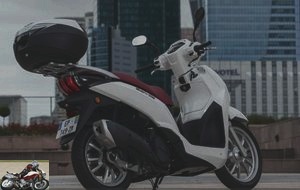 The Allure version of the Belville 125

One last point: Belville with only one central "l". Belleville, the district of Paris, has its protected designation. Peugeot Scooters is inspired by it for a name that refers to the French art of living (although Belleville, it has become a bit of the area, Saint-Germain-des-Pres or Auteuil-Neuilly-Passy, ​​it would have been more appropriate!), a name that is easy to pronounce in different countries.

The Belville exists in France in two versions. The Allure version was to win 60% of sales: we can recognize it with its classic colors (including this white, red seat) and also because a 37-liter top case is delivered as standard, which compensates for the usual criticism. large-wheeled scooters, namely a small trunk. At the same price, Peugeot Scooters also offers the RS version, more sporty, with a specific mat gray color, a saddle with red stitching, an aluminum floor, a small black windscreen, black rims with red piping.. 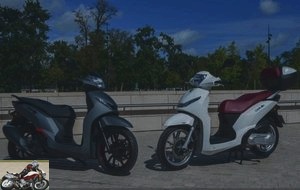 The Peugeot Belville RS and Allure

Both are at the same price: 2899 €. In other markets, a 200 version is offered, as well as other trim and equipment levels.

The advantage of large-wheeled scooters is their stability; the downside is that the large wheels increase the saddle height. At 800mm, the Belville offers the lowest saddle in the category (category represented by the Honda SH 125, the Piaggio 125 Medley and, in some markets, the Yamaha Xenter 125). The flat floor is reasonably notched at the legs, so even garden gnomes should get their feet on the ground; if not, they will install side casters like on children’s bikes, that will too. 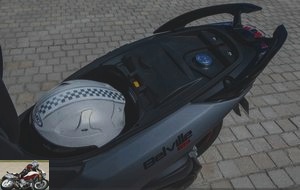 The small box can accommodate a helmet

Flat floor, generous saddle, narrow handlebars: we are fine. Especially since the ergonomics have been carefully studied to suit the greatest number. For example, your servant, a large patented sausage (all modesty excepted: 1.88 m, 90 kilos) can steer the handlebars without risking the effusion of Synovie at the level of the knees. It’s rare enough to be reported !

Once in the saddle, there are levers quite close to the handlebars (their distance is not adjustable), as well as a digital dashboard (identical to that of the SYM), which allows a switch between the speed display or the tachometer. Problem: it is very difficult to read during the day (it improves in the tunnels). 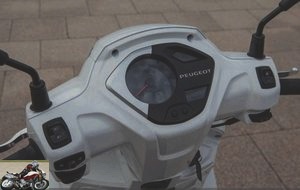 With Euro 4, Peugeot Scooters has redefined its engine offering. Entry-level, these are the Easy Motion, with 2 air-cooled valves. At the top of the range, these are the Power Motion, the 4 liquid valves. And in the mid-range, what interests us today are the Smart Motion. 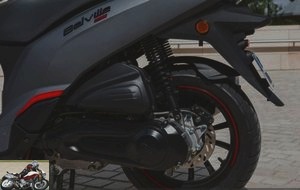 The Belville is equipped with the EasyMotion single cylinder

Although this scooter is built in China on the basis of Taiwanese technology, this Belville scooter has an engine, admittedly also built in China, but designed in France. The Smart Motion unit at Peugeot Scooters, it has the ambition to be flexible as a former president would say: in terms of displacement and cooling. For example, the Belville 125 is a liquid 2-valve, while the Belville 200 is an air-cooled 2-valve (this displacement allows it, as in Italy, to be able to go on the highways). Peugeot has worked on the efficiency of these engines, with particular attention paid to reducing friction. The alternator is disengageable, to limit energy losses. Since power is limited by law and curbed by certain market positions, Peugeot has also worked on efficiency by having power available earlier: 7400 rpm here, when the previous generation engine was delivering its power. max at 8500 rpm. Less rpm also means less wasted fuel: Honda understood this well with its generation of NCs.

Peugeot Scooters, with this Belville, does not ambition to confront the top of the range of scooters, those which are at the legal 15 hp. The idea here is to make the mid-range affordable with accessible technology, but not cheap. This motor is produced in China.

What do we ask of a scooter? To be forgotten, right? Well, that’s what this Belville 125 quickly achieves! Narrow, agile, responsive thanks to its punchy engine, it weaves its way between cars with great grace, brakes well and runs while its engine, if it does not reach the power limit of the category, allows you to accelerate with real vigor (the 0 to 10 m is covered in 2.6 seconds, while the 0 to 100 meters in 9.6 seconds, which, in reality, can drop most vehicles operating in an urban environment). 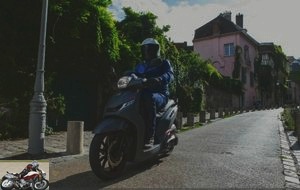 Narrow, agile and punchy, the Belville is perfect for the city

The great quality of this scooter and users will certainly appreciate it, it is to be quickly forgotten. Neutral and manoeuvrable chassis, punchy engine, very appreciable agility, soft controls: very quickly, it is no longer a scooter, but the extension of oneself. 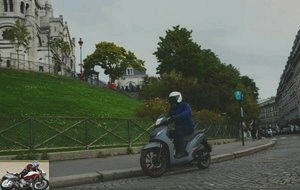 Le Belville on the cobblestones of Paris

In town, we also appreciate the presence of warnings, as well as an audible blinker signal. Just like that of a USB socket in the storage compartment in the front apron, as well as a hook to secure a bag, a bag that will take its ease thanks to the flat floor. Finally, large-wheeled scooters traditionally have a lack of space under the saddle (which opens with a button on the right stalk): Peugeot claims that you can fit a full-face helmet in the trunk of the Belville; it must pass (everything fits into everything with sufficient momentum, said the philosopher Jean-Claude Van Damme), but space is still limited and it will be preferable to protect your helmet with a cover at the risk of ruining the painting quickly. Notwithstanding, Peugeot Scooters equips the Belville (standard on the Allure version, optional on the RS), with a "native" 37-liter top-case. Native, because it does not need a support platform and it plugs directly into the machine. Bonus: the ignition key also opens the top case. Royal ! 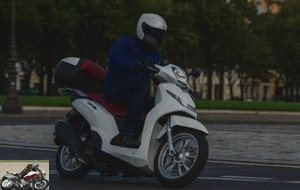 Allure in the city

On the other hand, a stop & start would have made it possible to go even further in a virtuous approach.

108 km / h odometer! It was, at the risk of my life, but listening only to my professional conscience, that I obtained this top speed. Peugeot Scooters claims 95 km / h chrono. Very good. However, in absolute terms, it is quite little and it is above all a speed that we will have difficulty achieving easily or with patience. It will therefore be difficult to leave the hypercentre to attack the outer suburbs. On the other hand, at these measured speeds, the large wheels guarantee stability.. 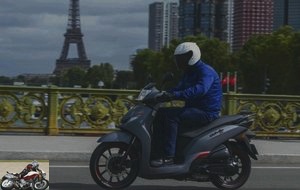 But this remains consistent with other 125 models of the brand, whose maximum speed is quite often limited compared to the competition..

As said above, with 95 km / h on the clock well, we will not have the great thrill, but we can still follow the cars and not be overtaken by the trucks. But we can’t double them either. Nevertheless, the times are quite correct and the machine is handled with great ease.. 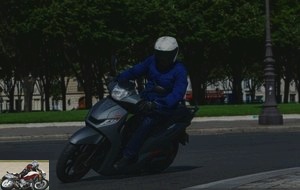 16-inch wheel in front, 14-inch wheel behind: that’s for the 125. Because the Belville also exists, in some markets, in a 200 version, in which case the rear wheel is also 16 inches. Compared to the SYM, the suspension settings have been revised and it is clear that on the cobblestones of Montmartre where we went to ride, that the Belville does the job very correctly and is not a breaker, sadistic game to which a large part of its competitors engages.

The Euro 4 standard requires at least coupled braking on the 125. Peugeot Scooters goes further and equips the Belville with ABS. Oh, ABS is only available on the front wheel, so we can stop at a red light with a loud screeching of tires, rear wheel blocked, to scare the little old women and thus contribute (modestly, of course, but small streams make great rivers) to the cleaning up of pension fund accounts. 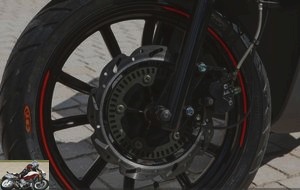 Braking is provided by a 260 mm disc at the front

That said, the rear wheel is also equipped with a speed sensor, which allows the central ABS to work by averaging the two wheels and thus optimize the levels of triggering at the front. In fact, we see that the ABS is very little intrusive, that the braking is powerful and adjustable, despite a rear that blocks a bit quickly. Nothing alarming.

As we have said, the legroom is rather generous and the suspensions are of quality compared to the competition. That’s good, therefore, especially since this machine is not necessarily called upon to tackle intercontinental travel. Considering the modest top speed, the lack of wind protection is not a problem. 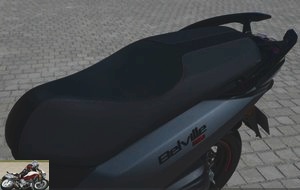 Seat of the Peugeot 125 Belville RS

Peugeot Scooters claims very measured consumption with its new generation of Smart Motion engines, in the order of 2.5 l / 100. With a 7.5-liter tank (the orifice is under the saddle), the range will easily exceed 250 kilometers. 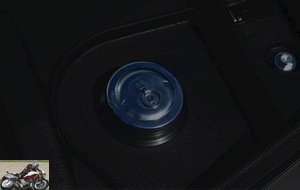 Almost 70% of the large-wheeled scooter market in Europe is trusted by the Honda SH, a machine which is therefore a real cash cow for the world’s leading manufacturer. Unsurprisingly, the Honda was the benchmark to approach: we can say that Peugeot has succeeded, while managing to contain the selling price, which is 400 € cheaper than the Japanese.

Admittedly, the SYM Symphony ST is also still nearly 500 euros cheaper, but it is satisfied with a coupled braking and an air-cooled engine, a little less powerful. Not the same dope, therefore, despite appearances.

Well looked, very "Peugeot" in its appearance, practical with its standard top box, pleasant to drive and reassuring, the Belville could well increase this small figure of 3.1%. 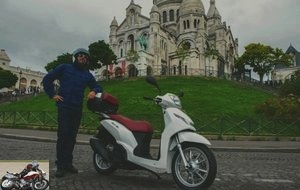