The Piaggio MP3 is a phenomenon in itself…. An idea first, then a hole in the legislation which made it possible to open up to large-engine owners of the B license, formerly limited to 125 cm3. 125 cm3, Yourban, 300 cm3, 400 cm3, 500 cm3…. After more than 70,000 sales in France alone, the MP3 is not resting on its laurels and continues to evolve with the 2014/15 version slightly revised in terms of look and with its share of technical developments and in particular the arrival of the ‘ASR, for "Acceleration Slip Regulation", the in-house anti-skating. But with this new vintage, the Piaggio MP3 500 mostly gains front wheels that are one inch larger. What can radically change it and justify the change? Test 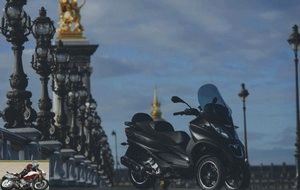 Should we still present the MP3, so much has it invaded French cities? It’s primarily a three-wheeler, with two front wheels and one rear wheel. And these two front wheels provide a real added stability, especially on the angle and at low speed. Former defect of these front two-wheelers, excess weight at the front giving a heavier steering than a traditional two-wheeled scooter. 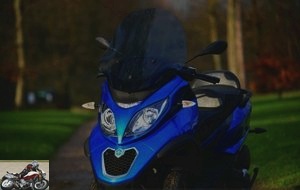 With this new vintage, Piaggio has revised the general line of the scooter to refine it, especially at the rear, while improving the driving position for the driver and adding room for the passenger. It must be said that the old double storage access, notably via a rear hatch, has been removed in favor of a more traditional long saddle, mounted on a cylinder. In the end, this automatically gives a longer saddle and above all more storage space below.

There is now an adjustable windshield in three positions and LED daytime running lights. Beyond the fashion aspect, it is more energy efficient and longer in duration. (and all the more so since changing the bulbs on a scooter systematically involves dismantling the bodywork and this immediately takes more time). Under the windshield, we note the disappearance of the tie for a trapezoidal grille adorned with the Piaggio logo.

The major evolution concerns the front wheels which go from 12 to 13 inches which are accompanied by new rims, more sporty. We will not forget either the arrival of the ASR as on the X10.

Note the aluminum finish of the new passenger handles that are more horizontal than the previous vintage.. 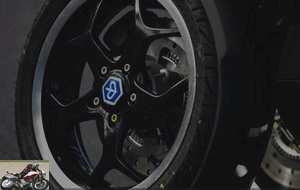 And even if all the evolutions are not obvious to the neophyte, the regular will appreciate. 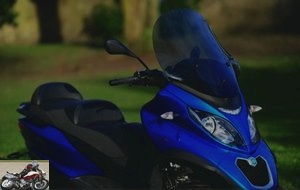 The saddle height has gained 5mm to 790mm. The 1.70m pilot was already not putting his feet flat on the ground. It is not improved with the new vintage with the tips of the toes barely touching the ground. Fortunately, the three-wheel effect provides stability when stationary and therefore you feel less need to have your feet on the ground. Moreover, with the roll-lock or front wheel lock, you can stop without dismounting! Admittedly, the manufacturer presents the system as a parking aid, so to be used only after getting off the scooter. But day by day, 90% of MP3 users engage it by decelerating and at a red light…. with a side effect and strain on the system which used in this way ages faster than its initial design anticipated. On the other hand, the driver now has a little more room in front of the legs and behind to lean against the backrest, which will make life easier for older children … if it weren’t for this brake pedal. , certainly mandatory for the legislation, but which we would do well on a daily basis to normally lengthen feet and legs in front of.

The dashboard was very readable. The new does not upset standards or habits but still gains in readability. We therefore find an analog counter on the left and an analog tachometer on the right, framing a digital display including partial double trip, odometer, engine temperature, clock, exterior temperature, instantaneous consumption, average consumption, average speed, maximum speed … The fuel gauge, quite precise, is housed inside the tachometer, on the right.

A few indicators finally indicate the opening of the saddle are open, or the engagement of the tilting system or the disconnection of the ASR. 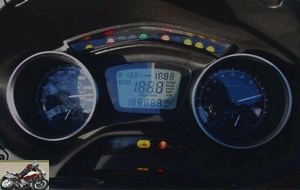 There is still no storage compartment at the front at the level of the apron. On the other hand, there is a location behind the windshield, which contains a USB socket and therefore allows you to recharge your laptop..

Mirrors provide excellent all-round vision and are easily adjusted, even while driving. 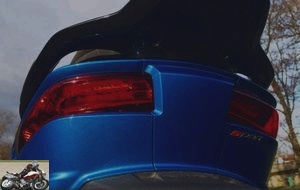 The big single-cylinder snorts with an understated, almost electric sound. The steering lock automatically unlocks as soon as you turn the right handle and you’re good to go! And you actually immediately appreciate the contribution of the larger front wheels with a new handling that is now very similar to a motorcycle. Granted, the front end is still a bit heavier, but not as heavily as in the past. The front does not engage the same way and this new handling is instantly appreciable. We forget the seven kilos gained from the new version. 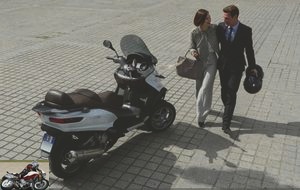 Gas ! Gas ? Is it a 500cc? Starts are crisp and easy to get out of traffic. The reaction to the request of the throttle is instantaneous. But the 40 horses are enough to tow the … big 266 kilos. And yet, it’s nervous enough to trigger the traction control on wet roads or even on certain cobblestones! And inevitably, in town, we are anyway, too fast, too fast. Because if the MP3 500 will remain behind compared to a traditional two-wheeled scooter 500 cm3 (even 530 cm3), it allows to be promptly at illicit speeds in town, which require to regularly scan the meter, fortunately very precise and readable.

The three-wheeler finds all its legitimacy on the first day of snow. Because where the bike would be on the ground at the first turn, the three-wheeler triggers the anti-skidding and if the handlebars are light enough to tilt the machine, we manage to ride, almost in complete serenity when the road is white and icy. and in all serenity as soon as we find car tracks. Experienced, tested, approved in this month of January !

Despite its apparent overweight, the MP3 sneaks very well in traffic, including and above all interfacing with ideally placed mirrors and a template that is ultimately all-purpose. Suddenly, with three wheels, extra stability, you even find yourself zigzagging more than on a motorbike between the lines, including very tight ones. No matter how much you are a biker, you change your behavior on the handlebars of a big scooter, the handling is so good.

We really appreciate the new steering, helped by the larger wheels, which provides real maneuverability greater than the old vintage and whether at low speed or faster. Because low-speed handling hasn’t taken anything away from high-speed stability. 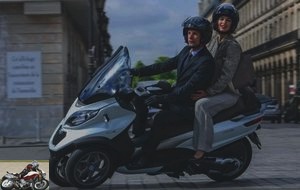 The MP3 sets off vigorously on the motorway to titillate 150 km / h but descend to around 135 km / h as soon as a pronounced false flat occurs. Weight and horsepower behind compared to other maxi-scooters do not make it the best friend of the highway, even if it allows to take it in complete safety, with once again, a surplus of stability at speed maximum, especially in the event of side winds or overtaking the truck.

The well-positioned high bubble does not generate infrasound or parasitic noise in the headphones and that is also good news.

On the departmental side, we find the overall behavior of the previous vintage of the MP3 500. Stable, manoeuvrable, we quickly link the virolos, not to mention the fact that the scooter accepts being a little jostled. A little slower in the change of lean than a motorcycle, it is no less formidable as soon as you pick up the pace. Only the overall weight tends to take the driver a little away in his driving and requires, in the event of a rapid and excessively rapid sequence, to anticipate a little more and improvise a little less. 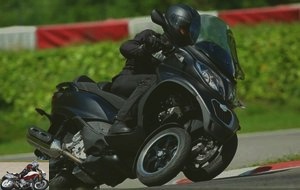 Double disc 258 mm at the front formerly 240mm), single disc but 240 mm at the rear, brake pedal on the right foot, in addition to the brake levers on the right and left, without forgetting the ABS, the MP3 brakes hard, well, precisely, with power and feeling. You never have to take it with your full hand to stop quickly and safely. And while the ASR is triggered quite easily as soon as you pass over a white strip or as soon as the road gets wet, ABS is rather discreet, even difficult to trigger on a daily basis. We welcome the progress of this still improved system on this version of the MP3 which has a version with three independent channels: the three wheels are really independent for the activation of the system and it is very comfortable on a daily basis..

With a long and wide saddle, the MP3 offers excellent comfort and space for both rider and passenger. The footrests are now retractable and are integrated into the bodywork to be forgotten and focus on the overall line. 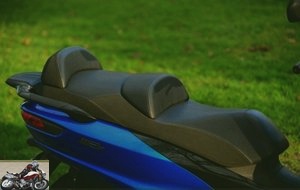 There is no storage compartment at the front at the level of the apron but there is a space protected from the rain behind the windshield with a USB socket to recharge your mobile.

The trunk then accommodates two real full-face helmets (like that of the X10), a feature quite rare to point out. And who says two helmets, also says the possibility of shopping for the week (except water packs). 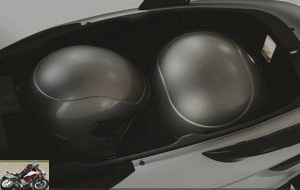 If the on-board computer pompously announces a 280 km range after refueling, the MP3 falls into reserve from 200 km, or even a little less depending on driving. The four main sections descend precisely after 50 km. 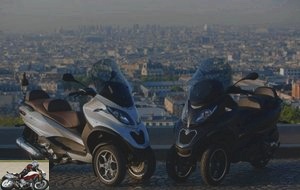 The same and better? The MP3 500 has evolved well and this new vintage even fully justifies selling the old one to equip the new one, not only for the arrival of the very practical ASR, but also for the improvement of the capacity of storage which makes it more practical in everyday life. This new version thus improves overall aesthetics as well as practical aspects while enhancing safety and above all improved ease of driving which makes it much more appreciated than its previous model. The new MP3 confirms being a smart choice for urban, even extended urban, with its ability to make freeways for inner suburbs. Only the user who frequently needs to make long journeys will be able to regret a slightly limited top speed which could then make him ogle on the side of a more traditional but more powerful two-wheeled scooter..

The technical sheet of the MP3 500