MP3 … Piaggio never stops offering its flagship three-wheeler in all possible displacements and variations, business included. In the LT version (Large Tread: wide axle), the brand seized a loophole in the legislation relating the scooter to a motor tricycle (category L5e) to authorize its driving with the car license.. A godsend and an idea that propelled the model to the top of sales. The 500 cm3 version is the most muscular of these variations, bidding on the 400 model which historically appeared first … enough to compete with the top two-wheelers in the category? Test… 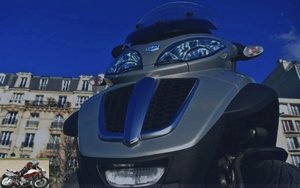 Nothing looks more like an MP3 than another MP3, whatever the displacement. If it weren’t for the 500 logo on the grille, it takes a keen eye and some expertise to spot the differences. Same line, same look, same overweight, nothing really distinguishes an MP3 from another, not even the muffler or the crankcase (as on the X10 for example). It must be said that the model is really specific with its two big eyes, its double front grille split with a metal insert, its relatively high screen, and its general overweight.

Only the LT version actually has a greater spacing of the two front wheels than the non-LT model with 465 mm … and this characteristic is noticeable only at the two letters LT inscribed on the left side wall at the rear. In its Executive version, it is the color that will make the difference with a brown seat for the white, bronze or gray bodywork with chrome silencer protection. In sport, matt and black predominate. 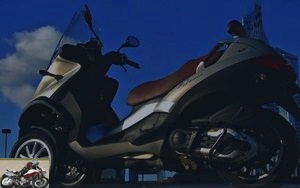 Despite the small 785 mm in height, the 1.70 m pilot barely touches the ground. It must be said that the saddle is quite wide. But it doesn’t matter, since when stationary, the MP3 stands up on its own and without a crutch. Under the eyes we discover a vast dashboard, with a counter and a tachometer, framing Piaggio style, a digital display including partial double trip, odometer, engine temperature, clock, exterior temperature. The fuel gauge, quite precise, is housed inside the tachometer, on the right. 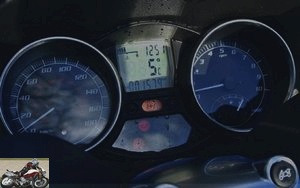 Some witnesses indicate that the boot or the saddle are open, or that the locking of the pendulum system is engaged … or not.

No real storage compartment on the front. On the other hand, we can slide over the meter and under the bubble of papers and small objects temporarily: practical for a parking ticket for example or especially a road map.

Mirrors provide excellent all-round vision and are easily adjusted, even while driving. 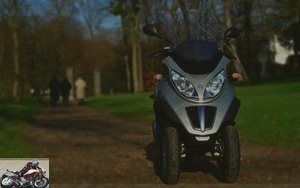 The MP3 snorts in a rather serious sound. The front end feels heavy for someone who has never had a three-wheeler before, compared to a two-wheeler. This heaviness is all the more obvious as the MP3 weighs 253 kilos on the scale…. dry, that is to say 266 kilos all full! Now, with the habit and the concept in mind, maneuvering is easy, even at low speed. Only the front brake pedal is disconcerting at the start by the space it takes on the right on an already narrow floor; it is unfortunately compulsory for homologation. 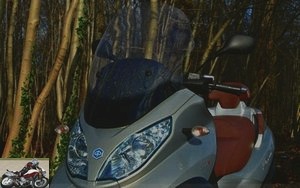 Gas !? Gas…. The 500 displays 40.1 horsepower, or 6 more than the 400, and that feels to find a responsiveness and a dynamic very appreciable in the city. In fact, the starts are efficient and lengthens just as much. However, the needle mostly rises to a maximum of 6,000 rpm during acceleration, far from the 10,000 tachometer. This gives you the full benefit of 493 cc with a smoothness that you did not expect from big mono. As much as the big mono of the X10 500 bumps and vibrates easily, that of the MP3 is really pleasant. It must be said that they have nothing to do since the latter comes from the Gilera Fuoco and Nexus 500. The excess power is felt all the more with passenger that we then feel much less than with the 400 version. Because alongside the 6 more horses, the 500 benefits above all from 20% more torque than the 400. As a result, the MP3 operates mainly between 4,000 and 5,000 rpm in town, between 50 and 60 km / h (counter ). 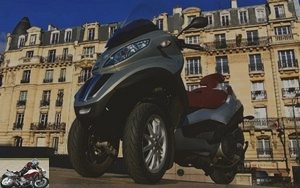 The three-wheeler finds all its effectiveness on faulty roads, even on the streets with a mini trench in its center. The 2 front wheels may not be on the same horitonzal level, the handling is natural while with a two-wheeler, we would tend to be tossed from left to right.

The "active" safety also feels the few days of snow, where one passes where the two-wheeler would simply slide to crash into the ground. But not only. Because as soon as the road gets slippery, in the fall with the leaves or on the manhole covers, the MP3 avoids many pitfalls. You can feel the rear wheel go off a bit, but the front remains perfectly in line..

And when stationary, you can quickly start engaging the electric tilt locking system by pressing the button on the right stalk switch. And when the right handle is pressed for the first time (without additional support), the system unlocks instantly. Practical and pleasant on a daily basis. You just have to avoid switching it on while driving, otherwise you will be surprised !

The MP3 sets off vigorously on the motorway, blithely reaching 150 km / h and then gradually climbing to 160 km / h. It is then only 7,500 rpm but the handle is on the cleat. It all depends on the route. There is no red zone on the tachometer which displays a majestic 10,000 and we understand why. MP3 never goes up there.

High bubble helping, we can then cruise quietly at 150 km / h, even if the steering is then less pleasant than a two-wheeler. 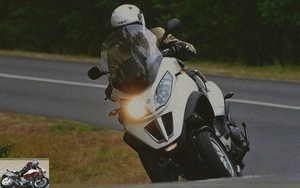 Back on departmental roads, the MP3 easily connects turns, even tends to give confidence with impressive handling on all three wheels, then prompting to accelerate the pace. There then happens a moment when you have to anticipate the next turn and force a little more than a two-wheeler, in connection with the inertia and the overall weight, of 253 kilos casually, practically the weight of a custom. As a result, it is better to force the angle a little more than to take the brakes which have the unfortunate tendency to pull straight ahead. A training of a few hours is still really recommended for a machine which can be surprising for someone who has never ridden two wheels.
Then, the power is there to allow you to double in peace…. without forgetting that there are only 40 horsepower for a significant weight and therefore with less important times than a two-wheeler.

And when night falls, the lighting is particularly powerful and efficient. 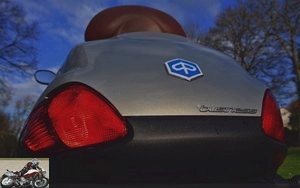 Between the rear brake, the front brake and the foot brake, everything is there! with twin 240mm discs at the front and a single disc of the same diameter at the rear. Everything is quite powerful, even being able to be enough with a two-finger grip in my majority of cases. The feeling is quite good and the braking has above all the merit of being accessible and easy to use even for the novice. Only the foot brake requires strong power and prolonged pressure to stop the machine, even in town, not to mention its lack of precision with real difficulty in measuring downforce. As a result, we forget about it on a daily basis and rely solely on the levers on the handlebars. The very heavy rear braking can cause a slight rear drift, blocking slightly, but the three wheels allow you to stay perfectly in line. The front brake alone is powerful and progressive…. The use of the two in combination, however, ensures very effective and safe braking. 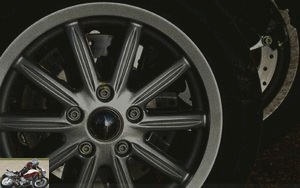 The two front wheels are naturally not in the same axis as the rear wheel, so unpleasant gaps and defects in the road with two wheels are eliminated here. Above all, comfort is really present, including on the connections and passages of lying gendarmes, particularly facilitated with shock absorbers that do an excellent job … and this, both solo and duo. 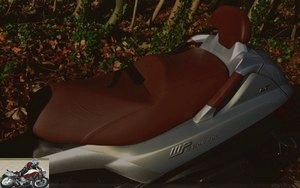 The saddle and the trunk are opened via two separate buttons on the handlebars. While the trunk opens simply and naturally, the saddle, on the other hand, does not have any actuator. Suddenly, you have to press the button and lift the saddle at the same time, which when you have your hands a little already occupied, is almost impossible. There is not much room above it, either. On the other hand, there is enough length to fit a big laptop or a tennis racket. Impossible to accommodate a helmet under the saddle, on the other hand, we can accommodate a full or even a modular type C3 in the trunk (which communicates under the saddle), not without playing on its position between entering and to take out. At first, it is more of an Italian puzzle but with a little getting used to, you get out of it and it comes in (be careful not to scratch the visor in the process). He willingly accepts a top-case, more voluminous…. but which in general condemns the rear trunk !
The 12V socket is appreciable.

The center stand is not essential, since it holds up very well when stationary. Here, there is no need for any force to put the MP3 on a stand and finally it is an additional precaution.. 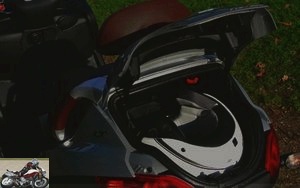 In the form of a bar graph separated into three main sections, each section empties approximately every 50 km … while the needle does not begin to move for the first time until after 25 km. The needle arrives in the red zone after 175 km … leaving a little more than 30 km of reserve and an overall autonomy of just over 210 km in mixed mode. This is the moment that the on-board computer chooses to indicate the kilometers traveled on the reserve. On the other hand, at constant speed on the motorway, consumption climbs to more than 7 liters per hundred.. 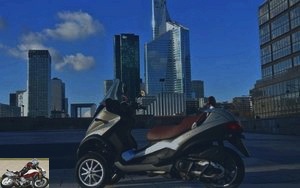 Powerful, safe, the MP3 500 is the ultimate achievement which no longer justifies a larger displacement, unlike the 400 which was quickly limited (the arrival of the 400 has also predictably dropped sales of the 400). On the other hand displayed at 8,899 euros, admittedly barely more expensive than the 400 (600 euros difference only), the MP3 500 however begins to titillate the prices of maxi-scooters of the same displacement or even exceeds them (the SWT 600 is at 7,690 € in promotion). Because if it offers additional stability and security, it is to the detriment of storage space and even power if you compare it to a two-wheeler. It will therefore be the preferred choice of motorists who do not want to pass the big cube license..