Hexagon, X8, X9…. Piaggio has come a long way since 1993, posting more than 400.00 cumulative sales for the brand, which is the segment leader in Europe with a 30% market share. Far from the arms race in cylinder capacity, Piaggio has upgraded its flagship model to unveil the X10: a large GT scooter intended to consolidate its leadership position on the French market. And for this, the firm of Noale has not been there by four ways, with a new style, a new engine and especially with the automatic variation of the model in 3 displacements: 125, 350 and 500 cm3. 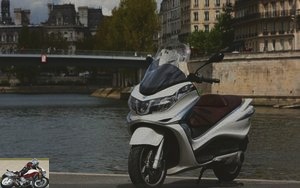 Usually when a template uses the same name, the 3 versions are different in terms of template. That is not the case here. Because the 3 displacements share the same platform, the same size and the same exterior look. As a result, apart from details such as the exhaust or the engine crankcase, it is impossible to differentiate them! Suffice to say that the 125 has everything a big, and even the 350. In fact, the X10 has everything on the outside of a maxi-scooter! Test…. 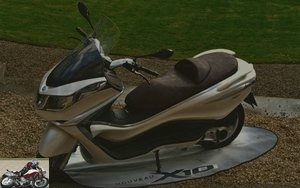 Piaggio unveils with the X10 a scooter with fluid, generous shapes, in line with Italian designs. It’s elegant and urban, stylish and refined, and signed Piaggio, without any reference to any other canon of its kind. We immediately notice the metallic insert flowing horizontally across all sides of the scooter, never seeming to stop. It is true that at 2265mm it lengthened compared to the X9 but is only 5mm longer than a Burgman 650. 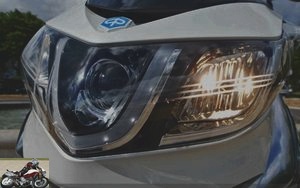 From the front, the scooter signs its personality with its front optics, xenon, surrounded by LED lights, highlighting the central tie, signature of the brand. At the rear, the double optical group seems to come from the automobile, further reinforced by red LEDs.

Beyond the design, the model is very well equipped as standard with dual ABS and ASR system, parking brake integrated into the center stand and lambda sensor on the 3-way catalyzed exhaust. The more observant will notice the near-large wheels with the 15 ’’ at the front and 13 ’’ at the rear, well shod with the latest Michelin Power Pure SC tires. There are also side deflectors on the apron as well as a higher than average bubble. 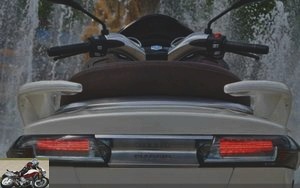 Under the grille, the scooter houses a 4T single cylinder of 330 cm3 (agreed to the misleading name of 350) and above all of the latest generation, with distribution with roller balance, system facilitating the adjustment of the valve clearance, dry sump lubrication system and centrifugal multi-disc clutch in oil bath. Everything is supposed to provide both power equivalent to a 400 cc with 33.3 horsepower and 32.3 Nm of torque and reduced fuel consumption close to a 300 cc. Piaggio even announces scheduled interventions only every 20,000 km! Indeed, only the changes of oil and filters are done at 10,000 km: a real plus for use and the budget of the cost per kilometer when we know that the maintenance of a scooter generally costs more than that of ‘a motorcycle. 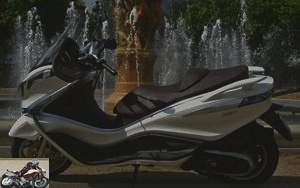 The saddle is only a low 760mm in height, misleading because it is very wide. The feet do not necessarily touch the ground very well for the pilot of 1.70. But the well-placed and low weight and maneuverability allow it to be picked up quickly and easily, even at low speeds, without paying attention..

In front of you, the instrument panel offers a 4 ’LCD screen, illuminated in blue, for the most beautiful night effect, all framed by two large speed dials and tachometers. Everything is indicated there from the average and instantaneous consumption, the average and maximum speed, the range, the fuel level and the temperature of the coolant, the journey time, a clock, the ambient temperature with frost warning, l ‘mapping indicator used (normal or eco), an odometer and battery voltage (the 500 even has a rear shock absorber electric adjustment level indicator). We do not forget about ten warning lights, for high beam, turn signals, fuel reserve, oil pressure, warning, ABS, ASR, anti-theft device, ignition or injection malfunction. 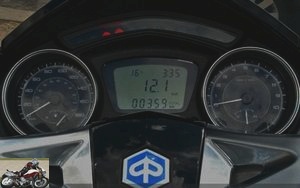 A nice little extra, the manual parking brake has disappeared, as on the BMW C600 and C650 in favor of a control associated with the side stand. The unfolded side stand automatically activates the parking brake.

Finally, the floor leaves 1 meter to find enough legroom. Something to satisfy all types of driving and investment. 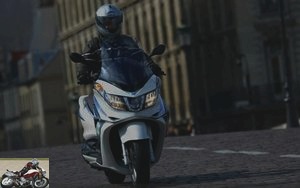 The X10 snorts almost silently. Suddenly on the right grip, the X10 reacts immediately, with almost no time differential in reaction, unlike scooters that display more power, especially in larger cylinders. During this time, the variator quickly rises to 7,000 rpm and then goes down to around 5,000 rpm. The imposing scooter is then handled as easily as a 125, without particular imbalance, even at slow speed.

The mirrors, at first glance small for the machine, offer an excellent field of vision, much better than on many motorcycles. 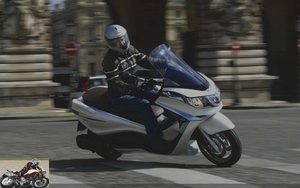 The scooter is easily tamed and turns heads…. not a single red light from which a scooter rider does not ask for information on the model! Isn’t he out yet? No, it will be available in June only for this version 350 and the 500. The 125 is already available however.

Everything fits perfectly between the lines of cars…. with the same size as a 400 cc, or even a 500 cc. Switching from Eco mode to Normal mode at driving level does not really allow you to feel the difference, so even in Eco mode, the acceleration is straightforward…. and braking at the height of acceleration. If the front brake (at the right handle) brakes well but without particular violence (especially compared to a usual motorcycle braking), the rear / front coupled braking is remarkably efficient, sliding on the saddle if you are there. not be careful with the arms not sufficiently extended. We always think of ABS, but here, even without ABS, the coupled braking is really remarkable. 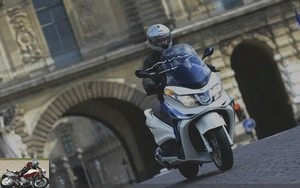 From its 5,000 rpm to 60 km / h, the X10 sets off vigorously on the motorway, climbing to only 7,000 rpm at 120 km / h and with still a little recovery to go tease the 140 km / h at 8,000 rpm. At this speed, the high bubble generates some turbulence and noise in the helmet and tends to lower itself to take full shelter behind the bubble…. with the effect of eliminating noise and turbulence. More stable at this speed than the vast majority of 400cc scooters, it is just a hair below the SWT 400 in high speed stability, especially on passages of bitumen joints. However, the course is healthy. 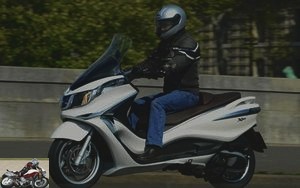 The braking system is similar to that of a motorcycle with a 280mm twin disc at the front and a single 240mm disc at the rear. It is above all equipped with integral braking and, as an option, the dual ABS / ASR (Acceleration Slip Regulation) system..

With full braking, the right lever acts only on one front caliper, while the left lever operates the other front caliper and the rear caliper simultaneously. Day to day, the scooter sits well and quickly, without diving under heavy braking, making it very enjoyable in everyday life, and much more efficient than standard braking. Everything is regulated by a distribution valve which calibrates the pressure of the front brake according to the rear brake, thus avoiding the risk of the front wheel jamming on rough roads..

On the version with ABS and ASR, each of the wheels is fitted with a revs acquisition system – a sensor and a tone wheel – instantly measuring its speed and deceleration relative to the vehicle. The sensors communicate with a 3-channel hydraulic unit which activates the ABS system if one of the two wheels decelerates suddenly, preventing the wheels from locking.. 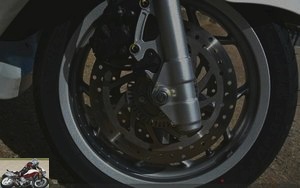 In short, in the end, if the right brake lever is already strong, taking both brakes makes you stop easily and quickly with a real feeling of security..

The long saddle of 820 mm could almost be there at 3. It mainly offers adjustment for the rider’s backrest and ample room for the passenger. Everything is comfortable, without being soft. Overall and on a daily basis, the X10 offers reasonable comfort, but on rough roads, the two double-acting hydraulic shock absorbers, with adjustable preload in 4 positions and 120 mm stroke do not prevent you from feeling the defects of the road. 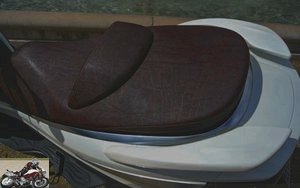 The X10 offers one of the best stowage capacities in the class with no less than 57 liters of storage in total, of which 52 liters are under the seat and the rest via the largest glove box in its class – where there is a 12V socket – and two closed storage compartments. The left-hand storage compartment also contains a USB socket for recharging a laptop.
The space under the saddle therefore makes it possible to carry two full-face helmets, including the larger modular type, and above all still leaves room for rain gear or even a few more races. Its length even allows you to place a tennis racket. 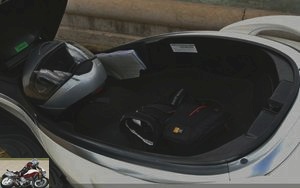 Depending on the type of driving, the on-board computer displays consumption. instantaneous between 25 and 50 km per liter and an average rather at 31 km per liter, or about 3 liters per 100 km. With its 15.5-liter tank, the X10 therefore displays an almost insolent range of over 400 km or even nearly 500 km in Eco mode. (to be checked on a long-term test). Eco mode which, if it does not masterfully modify the character of the scooter, must officially allow consumption to be reduced by 5%. 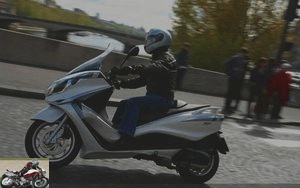 Piaggio has just released with the X10 an excellent model whose ramage is at the height of the plumage, especially in its pearly white Executive version and brown saddle of the most beautiful effect. The beauty of reveals even more at night via the backlit dashboard in blue which brings into a world of luxury and pleasure…. who is paid at the "fair price"? Because if the model is still trading at 5,699 and especially 1000 euros more expensive in the Executive version, we are fortunately far from the sidereal prices displayed for 500 cm3 which exceed 10,000 euros (or even 11,000 euros). However, apart from the top speed behind, the X10 offers everything one expects from a large scooter: good dynamics, safe braking, extensive storage…. even presence. And presence, he has…. not to mention ridiculous fuel consumption compared to the big engines, a lower price of overhauls with intervals every 20,000 km and a reduced insurance cost compared to the big ones. To use a well-known slogan, it’s all great, and frankly, there would be no reason not to do without !

Datasheet
of the Piaggio X10