The
Gladius is the new Suzuki 2009, directly derived from the SV: a V-Twin of almost 70 horsepower come to give a boost to the bi family and compete with the famous ER6N remodeled in 2009 which seized the segment for 3 years. Apart from the engine which immediately recalls its origins, the look of the SFV (code name for the Gladius) is truly innovative and does not borrow any style or appearance from anyone. Gladius and ER6n share a trellis, twin, bicolor and oblong frame. The lines are just a little more curved on the Gladius and a little tighter on the ER6. 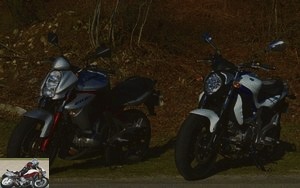 The Gladius first surprises with its two-tone livery: white and blue (triton), white and pink (magenta), black and metallic green … extended to the trellis frame in steel tubes. The oblong lighthouse gives a touch of femininity. If the pot of the ER6 disappears under the engine, that of the Gladius type scooter is more apparent. 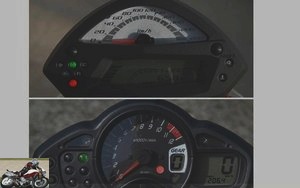 Gladius side, we discover a latest generation counter, with analog tachometer and digital counter embellished with a gear indicator engaged, but without fuel gauge. On the ER6 side, the meter is more modern and has a real fuel gauge; on the other hand, it turns out to be much less readable in use.

At the rear, the rounded passenger handles provide a good grip for both machines. 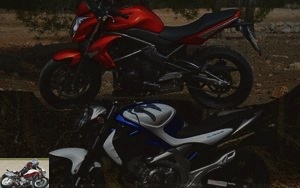 The two machines are of the same weight (within 500grams). The Gladius gives the impression of being lighter but the ER6 offers a thinner and lower saddle and makes it easier to put foot on the ground for the 1.60m pilot.. 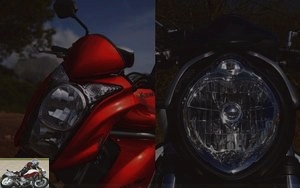 The curved shapes of the tank ideally accommodate the legs on the Gladius. The thinner ER6 requires more tightening. Large riders will appreciate the Gladius more for this reason..

The wide mirrors of the Gladius associated with the wider handlebars offer better visibility than those of the ER6.

The two-cylinder of the Gladius snorts in a nice muffled and round sound, very present, while that of the ER6 is more hoarse and angry..

The Gladius immediately takes him on a net of gas, without thinking about it. The accelerations and decelerations of the ER6 are more lively, almost violent, for the unaccustomed to a twin. But neither of the two models offers jerks, even on the gas net.

While the Gladius makes you want to roll up, the ER6 encourages you to turn the handle, giving the impression of constantly chomping on the brake.. 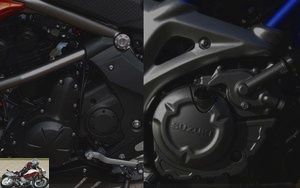 The Gladius turns out to be a treat in town: light, easy, manoeuvrable … the ER6 only beats it on U-turns easier on its handlebars. The two machines are already showing their different character. Where the ER6 encourages you to slip in, and have a dynamic driving, the Gladius wants to take its time without excitement … When the Gladius allows the 6th at 1,500 rpm, the ER6 pounded a little at the same speed. 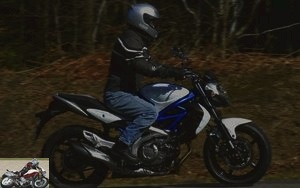 The two boxes are precise and easy.

The two twin cylinders stabilize at 6,000 rpm at 130 km / h … and start to take the wind in the same way. The lack of protection is identical for the two models which only occasionally accept to go up to 150 km / h, but at the cost of certain fatigue. The two motorcycles are therefore ideal for respecting the maximum speeds authorized by law…. 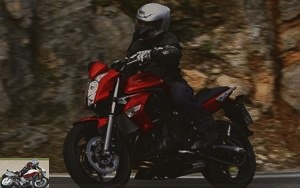 Gladius and ER6 are happy to find the roads that suit them: small twisty and departmental roads. 3rd and 4th gear show their respective efficiency while the meters oscillate between 110 and 140 km / h, already far too fast for the law.

The Gladius is more natural, when the ER6 asks to be taken to dive into the bend. The Gladius seems to follow the road when the ER6 wants to attack it. The Gladius does not require any effort when the ER6 begins to require a little piloting. On the other hand, as soon as the pace picks up, the ER6 goes faster on the attack to move from one turn to another. The Gladius is more quickly in the red zone and asks to play a little more of the selector to follow the same rhythm. The more curved handlebars and the riding position of the ER6 favor the attack while the wide handlebars of the Gladius and the position favor more coiled driving although it can be very dynamic.. 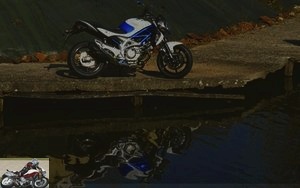 In the game of the sustained rhythm, the Gladius will rub faster than the ER6 because of a lower ground clearance; it is the left crutch which touches first.

With the angry engine of the ER6, one could imagine more violent recoveries, but the two motorcycles are almost equal to the reciprocal tests of recoveries and whatever the reports concerned..

The Gladius suspensions almost perfectly erase the defects of the road. The ER6 is much firmer and reveals all the defects of the road when the asphalt degrades, putting all the information in the back and jumping on rutted surfaces. The two saddles are on an equal footing and require the pilot to rest after 150-200 km.

The braking of the ER6 offers a lot better bite than that of the Gladius … and a power reinforced by the ABS. On the other hand, the ABS is activated almost easily on the ER6. The Gladius requires more grip to achieve the same effect, although the rear brake is particularly effective..

The handles of the Gladius are a little higher and offer a slightly better position.

The ER6 offers more space under the saddle … for the non-ABS version.

The ER6’s all-metal tank allows for a magnetic saddlebag, while the Gladius offers a less ideal mix of metal and plastic.

On the other hand, the Gladius is more suitable for securing a bag at the back with tensioners. .

The base of the crutch of the Gladius is wider and offers better support for the bike on all terrains and especially furniture than the ER6.

For both motorcycles, it is impossible to slip any lock in the front wheel; only solution, slide the lock into the rear crown with one of the rear wheel sticks.

We appreciate the real bib of the Gladius for protection against projections on rainy days but also the well-placed saddle opening lock. 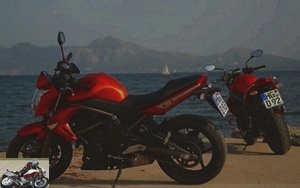 Consumption during the test

At the same rate, the two motorcycles consume exactly the same thing, under the bar of 5 liters per hundred, even bordering on 4 liters in cool driving! The ER6, which encourages you to turn the handle a little more by its character, tends to consume a little more. But it offers a liter of more capacity and therefore offers a greater overall autonomy that can exceed 300 kilometers.. 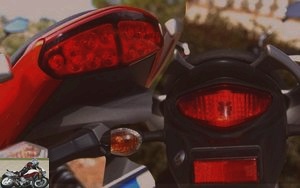 The
Gladius is a real novelty and really comes to attack the ER6n on its ground. The 2009 ER6 has made enormous progress compared to the 2006 version. Easy, light, flexible, the Gladius is easily handled and immediately established itself as the ideal bike for beginners. It even manages to dethrone the ER6 which was the benchmark in the field, until now, at the ease level. Almost quiet under 6,000 rpm, the Gladius offers a clear gain in vitality and fishing above revealing a personality that only asks to be whipped to give its full potential, while being usable and soft at all speeds . Only manly bikers may prefer the more angry and expressive engine of the ER6 to attack on small roads, even if the Gladius is more efficient in pure times, but less demonstrative. In the end, under an air of tranquility, the Gladius turns out to be a real success and a real rival for the ER6N to which it is able to keep pace in the event of arson, but with less effort. A 2006 Gladius ER6 comparison would have given the Gladius a clear advantage. The differential is less clear with the 2009 ER6 which has erased a good part of its previous "brutality" (all relative anyway). Manly bikers who like to work hard will prefer the ER6 while the Gladius will delight all those who wish to alternate between city, ride and nice arsouille with a motorcycle on which they will always feel at ease. But in the end, it will be above all the look, a little the price (200 euros more for the Gladius against the ER-6) and the respective finishes that will make the difference..