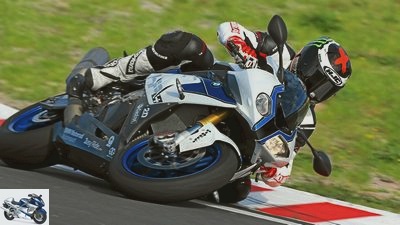 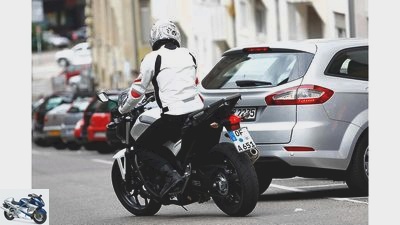 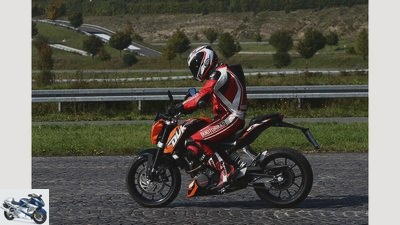 2/18
On the one hand, this smooth transition reduces the erection moment, and on the other, it guarantees a sufficiently strong change in the wheel load on the front. 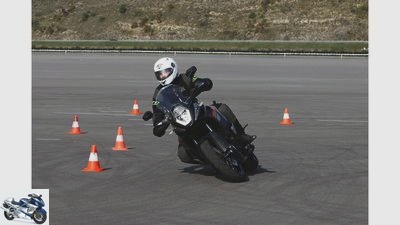 3/18
… If the electronic sensors detect a certain lean angle, the brake pressure builds up on the rear wheel first, and only then is the front wheel also decelerated by a gentle build-up of brake pressure … 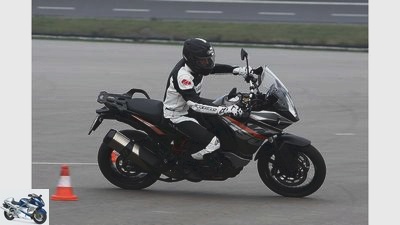 4/18
What the pro test drivers trained manually (slow pressure build-up, conscious counter-steering against the set-up torque) is regulated by the ABS cornering system itself … 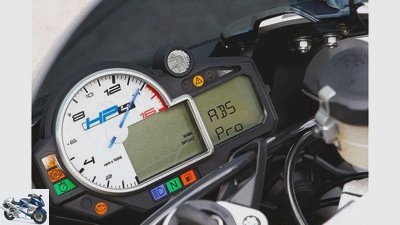 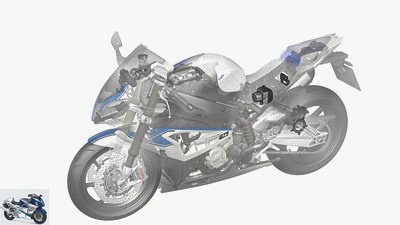 6/18
In order to make an ABS fully suitable for bends, in addition to the wheel speed (toothed pulleys with up to 60 pulses / rev), the inclination, the angular speed, the spring deflection and the accelerations must be recorded by an extensive sensor system. 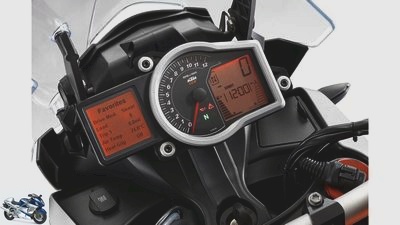 7/18
… 1190 Adventure, with which it was possible to incline up to 22 degrees with almost maximum deceleration. 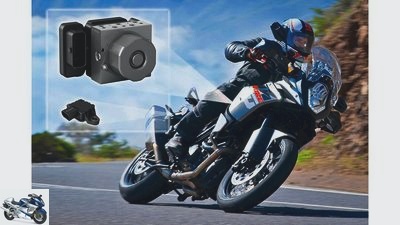 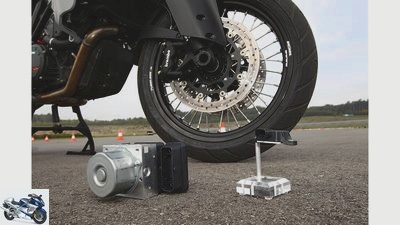 9/18
And this is how it looks, the piece of technology. 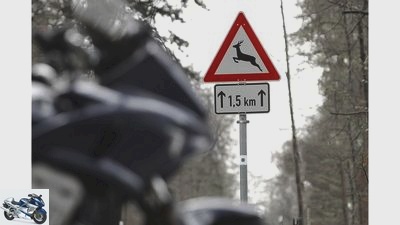 10/18
Sudden evasive maneuvers bring people both to the countryside … 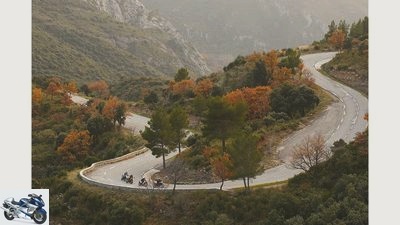 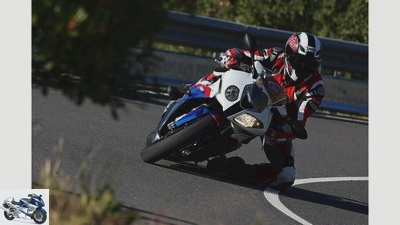 12/18
All the better when technology comes to the rescue. Such as … 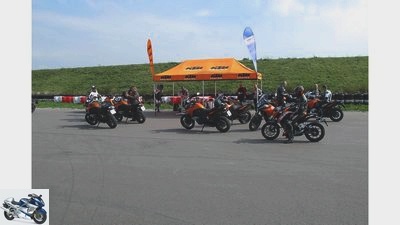 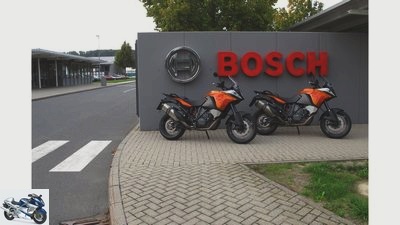 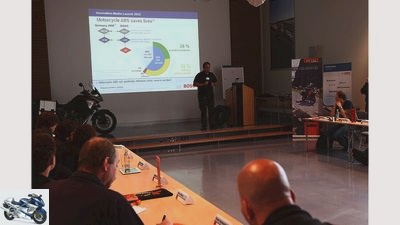 15/18
ABS saves lives. In the case of motorcyclists, it has a positive effect on every second accident. 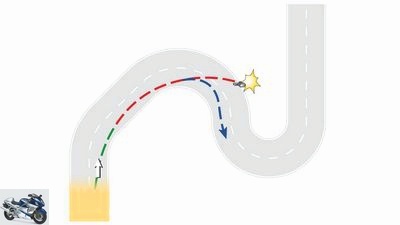 16/18
Who has not already seen it: curves that draw under deviousness. When frightened, many drivers really freeze on the brakes and do not dare to apply the steering force and force the motorcycle into the curve. Even with the new Bosch ABS, which is suitable for bends, the driver is challenged, but has the security of not falling over the front wheel despite the high braking deceleration. 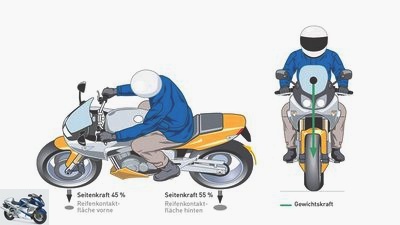 17/18
Left: When cornering at constant speed, the rear wheel only has to transmit low circumferential forces (yellow arrow). The weight distribution also determines the lateral force acting in the maximum inclined position.
right: When driving straight ahead, the weight (green arrow) acts vertically on the tire contact area. A blocking front wheel can be caught by quickly releasing the brake. 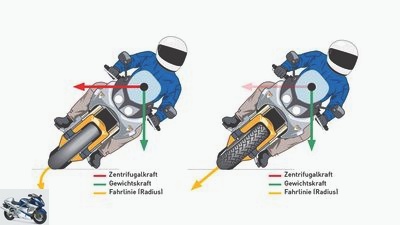 18/18
Left: In an inclined position, centrifugal force, which is created by the curve radius being driven (yellow arrow), and weight are balanced, the motorcycle remains stable.
Right: A blocking front wheel cannot transmit any side force (yellow), the centrifugal force (light red arrow) breaks away, the weight force (green) pulls the motorcycle down.

Too fast? Too late? Or does the curve close? If you have to grapple with your iron on a sloping position, you balance on a fine line – or you have cornering ABS on your motorcycle. PS analyzes the tricky incline on the brake.

Braking and banking, two terms that do not go together for many motorcyclists. Too much is said and written about lightning-like, nasty front wheel falls. And indeed, many a test editor has had experiences in the PS editorial team. No sooner has the brakes been turned than the front wheel folds in, accompanied by the scraping sound of metal and plastic parts rubbing across the asphalt. Why is it that two-wheelers, and we don’t want to rule out our departures on mountain bikes or racing bikes, like to smear over the front without notice? On the one hand, the reason is that the front tires are relatively narrow for reasons of driving physics and the contact area is accordingly small.

Compared to a 190/55 rear tire, the contact area of ​​a 120/70 tire is only about half as large, although about 45 percent of the wheel load (weight from the motorcycle with rider) is on the front wheel. A secure grip balance between the front and rear tires is only given if the tire temperature is right and the narrow rubber can interlock powerfully in the asphalt. It is not for nothing that the majority of front wheel falls are due to tire rubbers that are not yet warm. The very striking lead photo (left) was also taken under such circumstances. But even when heated up, modern athletes tend to push the driver out of the way over the front wheel when crossing the limit range in maximum lean angle. In principle, the trend towards ever wider rear tires is only due to the fact that the brute power has to be brought to the ground when accelerating.

When the rear wheel tries to overtake the front wheel

The author remembers the days when his Yamaha TZ 350 rolled along on 3.25-inch tires at the front and 3.50-inch tires at the rear. With the result that the two-stroke engines, which weigh only 110 kilograms but have 70 hp, tended to skid straight into the curve because the rear wheel set about overtaking the outside of the front wheel.

A process that not infrequently ended in the traditional, but very airy highsider. And why don’t you build grippy 190 front tires? Because such a fat tire would completely paralyze the steering behavior, keyword set-up moment and maneuverability.

Brake pressure builds up constantly for 0.5 – one second

So you have to be content with being careful with the front wheel when it reaches the limit and not straining it too much. This is especially true when, in addition to the lateral forces in a lean position, the tire also has to transfer the so-called circumferential forces that are generated by accelerating (only on the rear wheel) and braking. That is why the golden rule for safe braking applies all the more in an inclined position: do not build up the brake pressure suddenly, but slowly but constantly, measured in about 0.5 to one second. Only then does the constant deceleration ensure the so-called dynamic wheel load change, which can press the front wheel onto the asphalt with up to 100 percent of the total vehicle mass. If the front brake is torn abruptly, the tire locks up suddenly and loses both lateral and peripheral force transmission. The result: the motorcycle leaves the curve radius, which means that the centrifugal forces cease their stabilizing effect and the motorcycle literally falls over with the front wheel folded.

This balancing act is massively defused by an ABS. Not only the new Bosch ABS cornering, all modern anti-lock braking systems also work in an inclined position. By no means so fine in terms of control and sometimes with a hard set-up torque, but still with great safety without falling. In a test of ten different machines arranged by the ADAC, there were no falls when attempting to brake in inclines of up to 35 degrees.

Nevertheless, the move by KTM and BMW to Bosch cornering ABS is an enormous safety gain. Because what the professional test drivers trained manually (slow pressure build-up, conscious counter-steering against the set-up moment), the ABS regulates itself also delayed by a gentle increase in brake pressure. On the one hand, this smooth transition reduces the erection moment, and on the other hand it guarantees a sufficiently strong change in wheel load on the front.

Which means that braking in an inclined position is actually carried out without a fall. But even more important than the fall-free emergency braking in constant cornering is the safety when turning into corners or a forced evasive maneuver. In both cases, the motorcycle can be forced into a curve with evasive maneuvers within the control range of the ABS and with a deceleration of up to 9 m / s² – this corresponds to a very skillful braking maneuver carried out without ABS. An incline of up to 22 degrees with almost maximum deceleration was measured with a KTM 1190 Adventure, which, due to the wide handlebars and the neutral 19-inch front wheel, requires relatively little steering effort from the driver for this maneuver.

With the BMW S 1000 HP4, an incline of around 18 degrees was possible, but with rough stability due to the partially lifting rear wheel and an unruly momentum. However, this active safety during emergency braking and evasive maneuvers has not yet been able to provide ABS.

However, and the PS testers agree, the best ABS is of no use if the driver does not rigorously use this potential. This includes practical training in which this limit area is practiced until this emergency is burned into the “hard drive” and can be called up in fractions of a second if necessary.

You can only use it if you train with cornering ABS

The test drives recorded with 2D data recording showed how much effort it takes to reach into the iron in a fully inclined position. Although the professional testers were able to practice this maneuver umpteen times on a clear circular path, a repetition on winding country roads resulted in a significantly gentler and more careful handling of the front brake in an inclined position.

Conclusion of this test at the limit area: The introduction of cornering ABS is to be welcomed without reservation, but is of little use in practice if the customers are not familiarized intensively and professionally with this limit area. Industry, associations and dealers are therefore called upon to take the fear of the inclined position from motorcyclists.