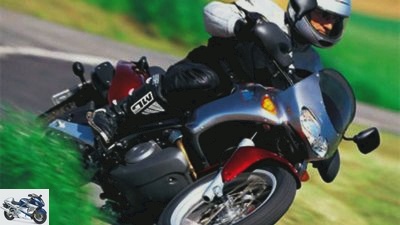 Just get started, leave everyday life behind. The new Aprilia Pegaso 650 i.e. invites you to a relaxed long-haul flight over asphalt and gravel. First Class or Economy? Let’s see what the wing horse has to offer.

Electronic injection with two throttle valves and one injection nozzle each instead of the previous constant pressure carburetor An uncontrolled catalytic converter now takes care of the exhaust gas purification A conventional 45 mm telescopic fork replaces the previous upside-down fork with a 40 millimeter guide tube diameter The rear brake disc grew in diameter from 220 to 240 millimeters At the front, new brake calipers The well-known composite frame made of lateral aluminum profiles and screwed steel beams is now painted black. Additional soundproofing around the engine

Unfortunately only economy ?? the Pegaso 650 i.e. remained true to its line even after the model update and offers a solid but unspectacular basis for long and enjoyable tours. With the suspension set-up that is mainly too soft at the rear and a hooked gearbox, the Aprilia gambled away its claim to a first-class place among the travel single-cylinder engines.

Tops: Good wind and weather protection with only little vortex formationLarge range thanks to the 22-liter tankComprehensive on-board tools in decent qualityPrepared for mounting a center standMany space even for tall driversLax, upright sitting postureGood, easy-to-adjust headlights Garda «with standard suitcases, main stand and hydraulic spring base adjustment Flops: unsteady, imprecise gearboxHigh weightTank dismantling only possible with a helperSpring strut and fork too softInpractical luggage rackHandlever not adjustableNot suitable for off-road use