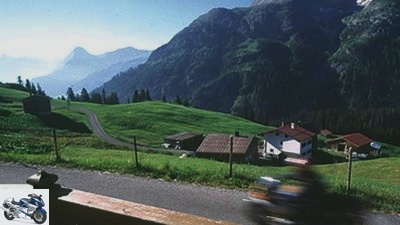 While the high Alps are still taboo for motorcyclists in spring, Vorarlberg and Bregenz Forest beckon with surprisingly crisp routes.

Finally! Finally driving lean angles again. Shift through all gears, bring your tires and muscles up to temperature. The little road south of the Schwarzach brook in the direction of Alberschwende swings in perfect rhythm and offers the best conditions for the first pre-alpine kilometers after the long winter break. Nice curvy and varied, occasionally a car to overtake. It has to be.

The warm-up took place in Bregenz. With a short hike through the narrow, car-free cobblestone streets high above the hustle and bustle of the modern lower town. Fill up in the sun until you drop in the cafe. Enjoyed the mild spring air to the full.

Feel, smell, taste – all the senses literally crave spring. And the Bregenz Forest shows that it not only has beautiful cities to offer, but also a wonderfully hilly landscape with ideal motorcycle routes. Still at the low mountain range, but still highly attractive. Occasionally a wood, a single farm, a ridge, a valley. And hardly any traffic on the beautiful little streets that meander through tranquil meadows via Muselbach and Krumbach to Sulzberg.

A detour over to the Allgau beckons. Even if the German-Austrian border line cuts through the mountain range, both regions form a common chain of foothills. Where the residents on both sides of the border advertise their respective cheese specialties.

After the blue Europe sign, it goes a bit along the German Alpine Road and via Scheidegg back to Austria. For the completion of the round, however, the mountain range of the Pfanders stands in the way. Sure, it could be easily driven through a tunnel, but buy a vignette for just seven kilometers? Insidiously, the Pfander tunnel is part of the Austrian motorway network. So again through Bregenz

Apparently it is Austrian transport policy to guide as many vehicles as possible into the city center. I patiently thread my way through and a little later climb back into the Bregenz Forest on a promising passage – through the Rappenloch Gorge. The small street along the Dornbirner Ache turns out to be a veritable motorcycle area. The path becomes increasingly narrower and steeper and steeper cliffs rise up on both sides. The cold penetrates the collar of my jacket as I slowly screw my way up through dark spruce forests to Ebnit.

Ebnit, the end of the line. No progress. Dead end – but probably the most beautiful in Vorarlberg. The panoramic view leads to the mountains in the northeast, where the peaks still wear snow caps. Okay us
have understood: The Bregenz Forest impressively demonstrates that it is not only medium, but also high mountains. That arouses curiosity, and I leave the Ebniter valley to make further explorations. Now in terms of high mountains. To do this, it first goes back down into the Rhine Valley to climb the next mountain range a little further north.

The path leads in wild curves from the valley up to Bodele. What a lane! Isolated houses in the alpine style, contemplative wooden huts, meadows and gardens that have already overcome the wintry gray and bright green enliven the landscape. In a dedicated ascent and descent I reach Schwarzenberg with its stone-old, flower-adorned farmhouses around the village fountain. Here it seems that early summer has almost broken out.

I am almost tempted to pay another visit to the Allgau and Germany’s highest pass, the Riedberg Pass. But at 1,400 meters, it doesn’t exactly raise the bar
alpine level. The Bregenz Forest goes a step further with the 1676 meter high Hochtannberg Pass – and wins the bid. So off to the really high mountains. The first time in this young motorcycle season.

At a brisk ride it goes along the green, bubbling Bregenz Ach. The first prominent peaks appear near Au, Kanisfluh and Diedamskopf, both of which hit the 2000 mark. A crowd of hikers crossed the street, red stockings, knee breeches and knapsacks. Your holiday mood is contagious.

But the motorcycle fever has long since gripped me. And the ascent of the Hochtannbergpass comes in handy. The Bregenz Ach remains down in the valley, and a perfect curve dance leads, yes, literally pulls me up. The pass turns out to be a first-class mountain route that can almost compete with colleagues in the Dolomites – despite the admittedly modest altitude. Warth comes into view and offers an almost perfect 360-degree alpine panorama at 1500 meters. A group of mountain bikers rushes across the road – the season changes. The skiers are hardly gone, the old white snow fields in the higher mountain regions are still reminiscent of
their lively hustle and bustle.

I get to the Lechtal Alps via the Lechtal. And they are waiting for the next stretch of formidable alpine road, the 1773 meter high Flexenpass. Now it’s going really high. When I stop at the Flexenhausl, I take a look at the map: The mountains all around now bring it up to 2,800 meters. The climax of my spring trip has been reached – and also its easternmost extent.

From now on, the Klostertal leads the way along the Lechquellengebirge back to the west into the heart of the Bregenz Forest. So fast, so animating that behind Bludenz the dangling up to the Faschinajoch is built. Sure, Bludenz, as a cozy Alpine town with its beautiful old houses and arcades, would tempt you to take a break, but I still want to go. No tourist city program can compete with the great routes in the Grober Walsertal.
In tingling ups and downs, I whiz from the 1486 meter high Faschinajoch down to Damuls and there again full throttle up to the Furkajoch at 1759 meters – not to change with the mighty Fast-namesake in central Switzerland. The Bregenz Forest offers spring programs in all driving categories.

As I gradually approach the Rhine Valley on the beautiful hillside road above the Laternser Valley, another city sparkles deep down out of the forest. Feldkirch – the treasure chest with winding streets, medieval fortifications and a baroque castle high above the old town. It has to be done now, and a little break is now urgently needed. The BMW can crackle with relish, while I enjoy the break program between the cat tower, powder tower, water tower and theft tower. Have a cozy coffee in the Marktgasse, relax, calm down the gas hand. After all, spring has only just begun.

The Bregenz Forest is an all-rounder because it is next to
Middle and high mountain landscapes also special-
which beautiful, historic cities offer? connected by a network of low-traffic streets.

D arrival
From Stuttgart via A 8, A 7 and A 96 to Bregenz, from Munich via A 96. Alternative for the Bregenz needle eye: From the
A 96 before Lindau on the B 308 (German
Alpine road) and via Lindberg–
Drive Scheffau into the Bregenz Forest.
D travel time
Due to the very different altitudes, you can already tour the Bregenz Forest in March without any problems and in the event of a late snowfall, you can go deeper
Withdraw layers. The mildest climate in Germany prevails in the Lake Constance region.
D stay overnight
Hotel Walserberg in Warth, phone 0043 /
5583/3502, Internet: www.walserberg.at,
Email: hotel@walserberg.at. The four-
Star hotel offers large comfort rooms, sauna, steam bath – and a fantastic mountain panorama. A double room with breakfast costs from 66 euros.
A motorcycle hotel is the Gasthof Sonnenkopf in Faschina (Faschinastrabe 84, phone 0043 /
5510/316, Internet: www.sonnenkopf.at). There are 28 elaborated tour suggestions and the double room with breakfast from 68 euros.
At the Fetz mountain inn in Dornbirn-Bodele
(Bodele 574, phone 0043/5572/77400, Internet: www.fetz.vol.at) you can relax in the wellness area with a panorama sauna after the tour and pay for it
Double room with breakfast from 102 euros.
D literature
Offers great tips for motorcycle tours
the new band »Austria« from the MOTORRAD Unterwegs edition. One of the seven
Tours is especially dedicated to the Bregenz Forest. Available in the book for 16 euros-
trade or in the MOTORRAD shop at
www.motorradonline.de.
With a scale of 1: 100000, the map “Vorarlberg” from Freytag & Berndt for
8.80 euros a very accurate representation.
D information
Bregenzerwald Tourismus GmbH,
Telephone 0043/5512/2365, Internet:
www.bregenzerwald.at. And Vorarlberg-
Tourism, phone 0043/5574 / 42525-0,
Internet: www.vorarlberg.cc.