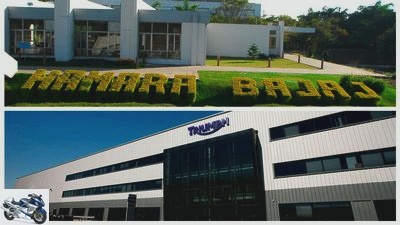 On January 24, 2020, the British motorcycle manufacturer Triumph and the Indian motorcycle manufacturer Bajaj officially announced their collaboration. It is designed for long-term cooperation and not “capital-based”, so the cooperation is not based on a financial participation in the form of a share takeover. As early as August 2017, Bajaj and Triumph announced a partnership between the two companies in a joint statement: “(…) a number of mid-range motorcycles are planned,” it said, built with the help of “shared strengths.”

In the meantime, further details about the cooperation have become known: The models are to move in the medium displacement segment from 200 to 750 cm³, whereby as many different market segments as possible are served in this class. Prices in India should start at under 200,000 rupees, which would be around 2,500 euros. The new models in the medium displacement classes are also to be offered in Germany and other markets in which Triumph is already represented. However, nothing is known about the pricing in this country. 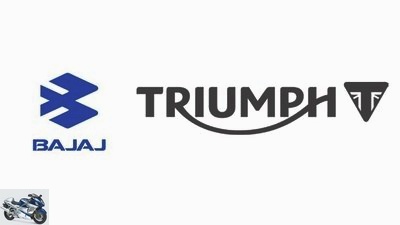 In Pune, India, Triumph Motorcycles and Bajaj Auto India officially announced their cooperation in January 2020. New models are developed and produced, and Bajaj takes over sales in new overseas markets.

The motorcycles are developed by the British and manufactured in India by Bajaj. The production of the small models should start at the end of 2020 / beginning of 2021 at the earliest. The first studies could already be seen in February 2020 at an Indian trade fair or at EICMA 2020.

The machines manufactured by Bajaj are to be sold in India and the emerging countries of Asia under the Triumph brand name in the future. This also makes Bajaj one of the most important sales partners for Triumph when it comes to opening up new markets.

Nick Bloor, CEO of TRIUMPH Motorcycles, said: “This is an important partnership for Triumph and I am delighted that it is now official. The motorcycles that will emerge from this will not only open up new markets for us, but also a younger, but nevertheless discerning, customer base. The new bikes are another step in our global expansion. In particular, we are concerned with the rapidly growing markets of Southeast Asia, but also with Europe. “

Rajiv Bajaj, General Manager of Bajaj Auto India, said: “Triumph is a world-famous brand with a great tradition. We are therefore confident that there will be great popularity for these new motorcycles in India and other emerging markets. We look forward to working with such a famous motorcycle company and using each other’s strengths and expertise in such a way that the partnership is a success for all of us. “

The Bajaj Group, based in Puna, India, claims to be the third largest motorcycle manufacturer in the world and the second largest in India. What makes the new collaboration interesting from a European point of view is that Bajaj has held shares in KTM since 2007, which is now almost 48 percent.