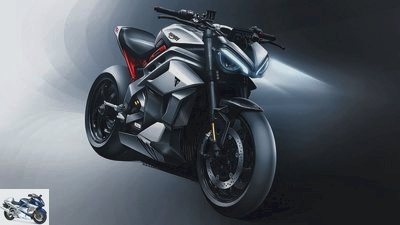 1/14
Triumph is working on its first electric motorcycle. 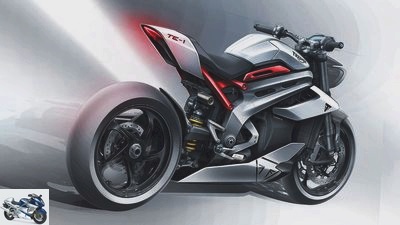 2/14
The corresponding project is called TE-1. 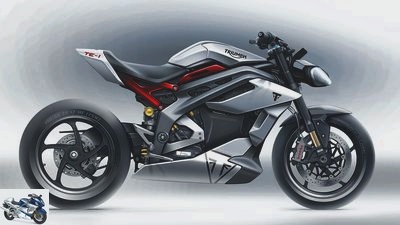 3/14
The first sketches show the upcoming series model in the Street Triple look. 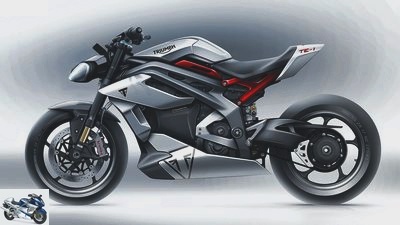 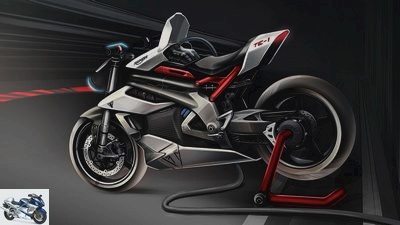 5/14
The look of the TE-1 already looks extremely tasty. 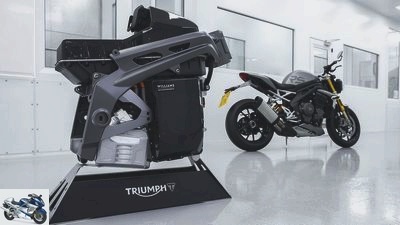 6/14
Williams Advanced Engineering, Integral Powertrain Ltd. and the Warwick Manufacturing Group (WMG), a division of the University of Warwick. 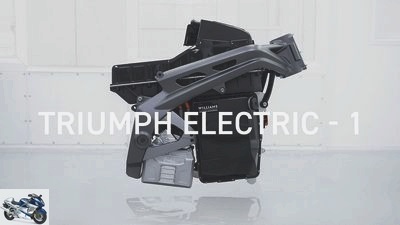 7/14
The project was also supported by the British government. 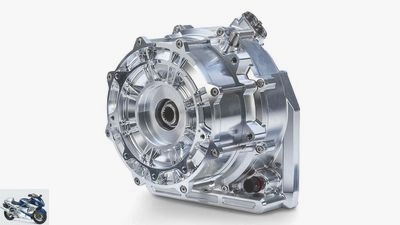 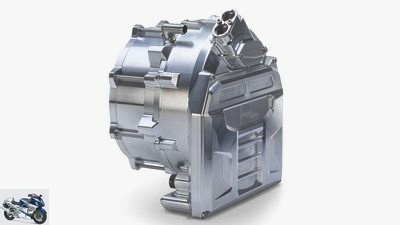 9/14
The scalable electric motor has an output of 130 kW in the current configuration (that’s a whopping 180 horses). 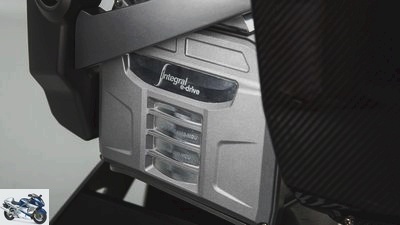 10/14
Further data on the engine have not yet been given. 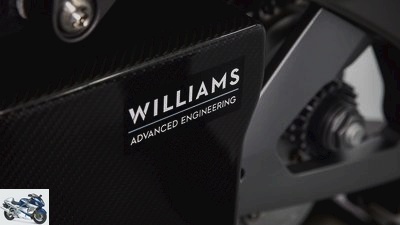 11/14
The battery, which also integrates the control unit in its housing, should outperform all competitors on the market in terms of performance and energy density. 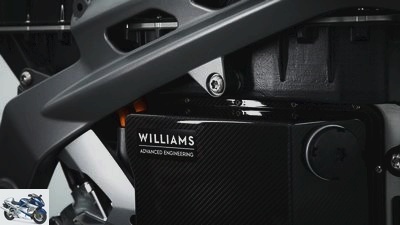 12/14
In addition, it should be light and compact and – very importantly – enable a groundbreaking range. 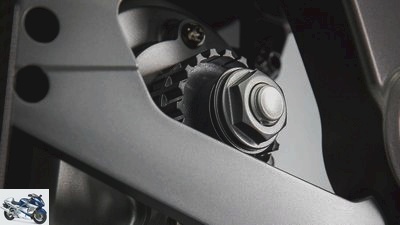 13/14
The final drive takes place via a toothed belt. 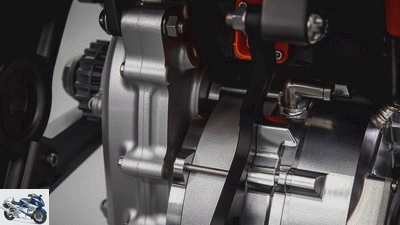 14/14
In the following project phase three, the sketched prototype should mutate into a real bike. Phase 4 then envisages the conversion into a series electric motorcycle.

Triumph is committed to the topic of electric motorcycles with the TE-1 project. After almost two years of research and development, there is now a first outlook.

Purely electrically powered motorcycles are still met with skepticism from many motorcyclists. Too little range, too expensive, too little sound are just a few reasons for the rejection. Nevertheless, the two-wheeler industry is also facing the electric revolution. Apart from smaller providers who already have numerous and only e-motorcycles on offer, only Harley-Davidson can come up with an electric motorcycle in addition to combustion engines.

To the electric motorcycle in two years

In mid-2019, Triumph made a clear commitment to the electric motorcycle and announced the TE-1 project. The aim of the two-year TE-1 project was to develop special technologies for electric motorcycles and innovative, integrated solutions in this area. Williams Advanced Engineering, Integral Powertrain Ltd. and the Warwick Manufacturing Group (WMG), a division of the University of Warwick. The project was also supported by the British government.

Triumph brought its knowledge from motorcycle construction to the TE-1 project: In addition to progressive chassis design and engineering, Triumph has extensive know-how in the field of production technology. Williams Advanced Engineering develops lightweight battery technology and solutions for its integration. The e-Drive department of Integral Powertrain Ltd. delivers a tailor-made electric motor with high power density and a silicon carbide converter, which are connected in a common motor housing. Electrification expertise was incorporated by the Warwick Manufacturing Group at the University of Warwick. With models and simulations based on future market requirements, it also bridges the gap between research and development and commercial success. Innovate UK is a UK government agency promoting science and technology programs aimed at moving the UK economy forward. It supported the project partners and made financial resources available.

“The Triumph TE-1 project is part of our strategy for e-bikes. In this context, too, we will deliver what customers expect from their Triumph motorcycle: the perfect balance of handling, performance and user-friendliness”, explains Triumph boss Nick Bloor at the time.

In March 2021, the project team will present the fruits of their work – and they are really tough. The TE-1 is already recognizable as a real triumph from a purely visual point of view. The lines, the layout and the single-sided swing arm – clearly, there is a lot of speed triple in here. That the drive is purely electric – hardly visible. 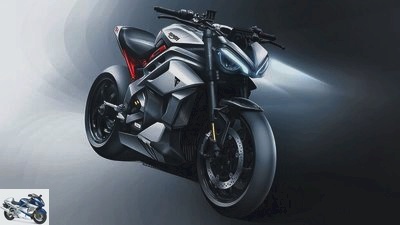 The project partners are holding back on hard facts, but they are striking in a mighty big way: The battery, which also integrates the control unit in its housing, is supposed to outperform all competitors on the market in terms of performance and energy density. The 15 kWh energy storage device is expected to have a peak output of 170 and a continuous output of 90 kW. In addition, it should be light and compact and – very important – enable a groundbreaking range. Nevertheless, the power output was designed to be as aggressive as possible. The 360-volt on-board system allows quick charges that recharge the battery to up to 80 percent in 20 minutes. Development partner Williams brings all of its Formula E experience to the table. 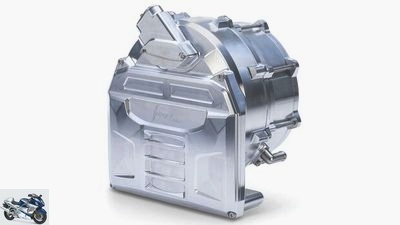 The engine details make you sit up and take notice. The scalable electric motor in the current configuration has an output of 130 kW (that’s a whopping 180 horses), but only weighs 10 kilograms. Among other things, recuperation and traction control are integrated into the control. Triumph has packed the battery and motor in a newly developed aluminum frame. The rear frame is screwed on. The other peripherals are based on known components. USD fork at the front, central spring strut at the back, the stoppers come from Brembo.

In the following project phase three, the sketched prototype should mutate into a real bike. Phase 4 then envisages the conversion into a series electric motorcycle. However, Triumph does not provide a schedule for these further steps. Assuming the current speed, the first electric triumph could roll down our streets at the end of 2023 / beginning of 2024.

As a basis for the TE-1 project, the British asked their customers about this topic by e-mail in February 2019. Customers should answer the following questions:

With Triumph, another major motorcycle manufacturer is tackling the inevitable subject of electric motorcycles. The already known dates make you sit up and take notice, the further assurances arouse anticipation and the first sketches make Triumph fans cheer. Our suggestion: turn it into a Speed-E.