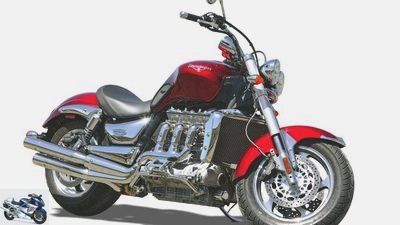 Cruisers live on superlatives. With the Rocket III, which was built from 2004, Triumph has finally shot the bird. It is the world’s largest series production motorcycle, but also a recommendation for keenly calculating second-hand buyers?

The very personal Rocket story begins almost two years before the official presentation, very inappropriately, in a Munich beer garden. “I just saw our new cruiser in Hinckley. Three-cylinder, 140 hp, 200 Newton meters, ”the Triumph technician murmurs to the editor. He frowns: “Don’t Harley copies always have to have a V-Zwei and a rear 200 tire rather than this amount of torque?”

The question is put into perspective when you stand in front of the rocket and see its elemental force. It is not in your dream that you would even begin to compare the British woman with a Harley. Even when standing still, a strong hand is required to maneuver the 361 kilos into the starting position. How will that be in motion? Much better, you see: like a captain who now controls his ocean giant with pinpoint accuracy using a joystick, the Rocket Man plows too. Of course, thanks to the finest interventions in the engine management, with which the performance in the first three gears is sensibly cut.

Without this blocker, Triumph steamers would otherwise cast off in a cloud of smoke from burnouts and powerslides. The Rocket is in its element on extensive country roads. But woe if the surface is wavy, the curve is narrower or even a hairpin is approaching. In the classic alpine area, the hard and strong hand is again required to literally whistle the primeval creature around the corner. With the power triple you shouldn’t rely on real lean angle in order to circle the bend with a clean circular stroke. And the masses push downhill tremendously. The one available since 2008 Rocket III Touring made a mistake in the then MOTORRAD-Alpen-Masters with a brake line that burst due to overheating. Understandably, the nerves are on edge. And an ABS will only be offered in the Roadster model variant from 2010 onwards. 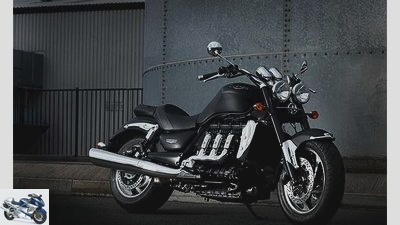 Triumph Rocket III Roadster: With a new seat bench, further back and lower footrests as well as a revised rear wheel suspension, Triumph promises a more active driving position compared to the touring version of the Rocket III.

Basically, the Rocket III is considered a solid vehicle in authorized Triumph workshops, which usually only needs to be serviced. Even with motorcycles of the first years of construction, which meanwhile have a mileage of well over 50,000 kilometers on the clock, there are no major repairs, which generally speaks in favor of durable technology. Surveys in the Rocket III community (e.g. in the fan forum www.rocket3.org) show that the transmission can cause more serious problems. In such cases, the torsional dampers often have to be replaced. In some cases this has already been done under guarantee, in other cases Triumph has shown goodwill and paid the part costs. According to inside information, mostly only machines were affected that had the torque limit removed using illegal software. Since service measures were also carried out during the inspection, the Rocket should be in a service book.

Market situation
Since the Rocket III is only available in homeopathic doses in Germany, those interested in used must be patient when looking for the right vehicle. The loyalty to the mega cruiser is high, even the offers from the early years of construction are often first-hand. A look at the average mileage shows that the Rocket is moved extensively compared to other cruisers. Of course, the low-priced entry-level offers in the 2.3-liter world under 10,000 euros are particularly in demand. This is confirmed by the active Triumph dealer Ingo Heller (www.heller-soltau.de): “They usually change hands on the fly.” The only option for price negotiations is the Touring version available from 2008 onwards. With narrow 180 tires and stale performance of “only” 107 hp, the castrated Rocket is not really attractive for many interested parties. Even if this lures in the MOTORRAD test with some advantages such as handiness, precise, appealing suspension or long-distance seating comfort. “When people buy the Rocket, they want one with steam,” explains Triumph dealer Heller. 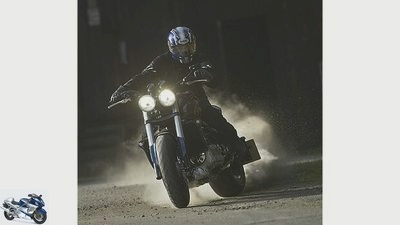 Hart: The roadster version is popular with the fans.