A scooter is always worth less than the sum of its parts. According to this paradigm, Yamaha unveils its XMax 300 Iron Max, an unlimited series of its XMax 300 and which allows two years after the release of the XMax 300 to review the evolutions of the model. And then, the whole XMax family is now assembled in France in the Saint Quentin factory and has thus benefited from a further step up in terms of quality, knowing that Yamaha quality was already there before. So, one more reason to take the step towards what is now the 4th generation of a model initially unveiled in 2005 ? 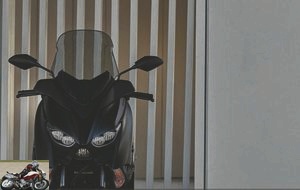 In the Max family, I ask for the Xmax 300, an evolution of the late Xmax 250 which has disappeared from the family. There are still the 125, 300 and 400 … without forgetting the TMax of course, but which doubles the budget and which even in look and behavior comes out of the XMax family. The whole represents more than 370,000 sales in Europe, while the 300 and 400 models have already been sold more than the XMax 250.. 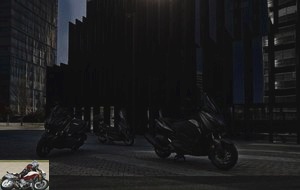 Put on a 125, a 300 and a 400, which we had at the start of the test and if you are facing the front or on the left side, you will not be able to see the differences. There isn’t even a small plate or number on the fairing indicating the displacement. It is therefore impossible to see the specifics of one displacement compared to another. But inevitably, on the right side, you will notice 3 different exhausts and behind the exhaust a part of the engine, naturally also different. Even the chassis are also identical, with identical trunk characteristics. In short, the 125 is big and the 300 is almost a dancer for its engine capacity, shoehorning into the frame. 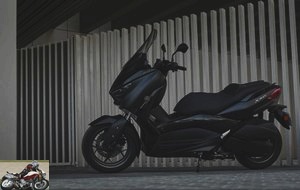 The look of the XMax is what made it famous and allowed it to dominate 125 sales for years. A sporty, aggressive, masculine look. No misogyny there, the buyer of an XMax is male 90% of the time. Taut lines, colors, sharp headlights, sheared tail light, it is cut for man. The Iron Max also benefits from a unique color with a matt gray alternating with a shiny black. It is qualitative and well done. And as always with Yamaha, the quality and finish are there. It is both tangible and felt on the quality of plastics and assembly. The Iron Max version also benefits from a chrome instrumentation outline, a saddle with stitching and a metal plate, metal footrests, leather on the front storage compartments and a smoked tail light. 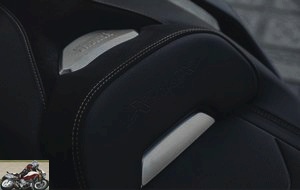 Specificities of the Iron Max version compared to the standard version: the saddle among others

It’s plush, ideal for executives who want to find the comfort of their big sedan on their urban mobility tool.. 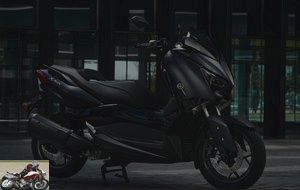 An Iron-Max version itself available in three versions, with urban, sport and standard, depending in particular on the height of the screen at the front.

Under the chassis, we find the 292 cm3 single-cylinder, developing 28 horsepower, a power relatively usual in the 300 category, including for certain motorcycles like the CB300 which outputs 30 horsepower..

Here we find the Blue Core technology developed by Yamaha which provides additional power for reduced consumption, thanks among other things to the shape and timing of the valves, a hemispherical combustion chamber, an injector with 12 nozzles, a cylinder offset to reduce mechanical losses, or even a jet oil on the piston of the DiaSil cylinder without forgetting a forced ventilation system.

We will retain the ABS, mandatory anyway, but especially the TCS, otherwise the traction control, the trick that avoids starting in comma as soon as the road slips. Some even put it on 125. Frankly, this is only justified from displacement like the 300 and again. But it can always save from a misplaced oil stain even if the acceleration is not insane in 300 either.. 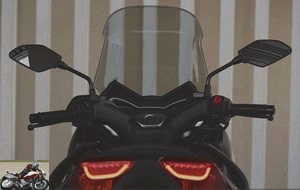 The saddle rises to 785 mm and despite a reasonable height comes with a wide saddle. As a result, the driver of 1.70 m just tiptoes on the ground. Fortunately, the weight remains limited to 179 kilos (all full) and the excellent overall balance allows for a machine that is easy to handle, especially since the driving position is natural, with the arms falling naturally on handlebars. Advantage of this high saddle, the knees do not go up. 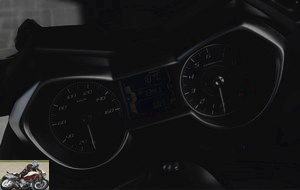 In short, it’s complete and the Target under the right thumb allows you to alternate displays, while driving naturally..

Finally, we appreciate the Smartkey, the coded key that can remain in the pocket to switch on via a central dial on the apron to open the saddle and storage compartment.

The Xmax 300 snorts in a muffled sound by the enormous standard pot, which can ideally be replaced by an Akrapovic, developed in partnership with the brand. Which saves beyond the much better sound, weight, small footprint and a really nice look. The XMax 300 does not vibrate at all at low revs, an almost surprising point for a mono. In fact, it does not vibrate at high speed either, which makes it a really pleasant engine to live with on a daily basis.. 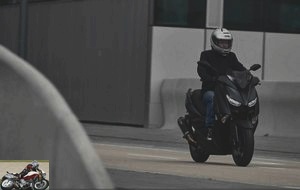 A 300 with the size of a 125! Suffice to say that the XMax 300 slips everywhere like an eel, even between the tightest lines, aided by the 15-inch front wheel, while the rear wheel is still 14 inches. It also has an excellent turning radius for the category which allows even more to go to play between the lines.

The response to the throttle is instant and smooth. It is effective without being a thunderbolt. Once again, we will not compare with a TMax of almost double the displacement and horsepower. But this is more than enough to get out of circulation smoothly. For those who might be frustrated by their motorcycle license, there is the 400, which adds a lot of extra pep.. 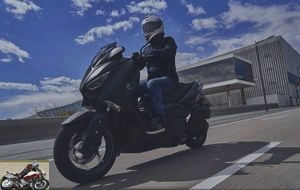 The XMax 300 purrs almost at 130 km / h, with a little margin to go to hang a 140 km / h odometer. The Iron Max bubble is good for protecting from the wind and deflecting above the helmet. On the other hand, we will carefully avoid the bubble of the sport pack, which only has a bubble in the name, cut flush with the dashboard. We then take it all in the face from 110 km / h, even 100 km / h if there is a little wind.

There is also an extra high bubble, which generates a little wind resistance and comes almost in the field of vision. So, we will stay on the screen supplied with the Iron Max series by default. The XMax remains unperturbed at top speed, providing excellent stability, even in big curves.. 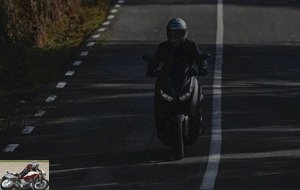 We will remember this good top speed which really makes it possible to go extra-urban or even to go on weekends with, to compare in particular with the 300 cm3 in three wheels which generally peak at 120 km / h. Favorable match for the X-Max.

Handy in town, stable on the motorway, how does the little Max do on a small road? He rocks ! It actually confirms its qualities, widely accepting to be driven at 90 km / h on roads officially limited to 50 km / h. He tilts on the angle in a natural way and even accepts being a little abrupt while reacting in a healthy way. In fact, it is rather the braking which finds its limits when the pace really accelerates with in particular a sensitive ABS capable of triggering on the angle and being able to destabilize the pilot the first time. It is therefore necessary to avoid titillating it. Now it’s a maxi-scoot, but it’s also not a surface-to-surface missile like the TMax can be, more rigid in very sporty driving. But the XMax remains healthy under all circumstances and gently and gently warns you when you reach your limits. And there is room, even if with identical displacement, we can attack harder on a motorcycle.. 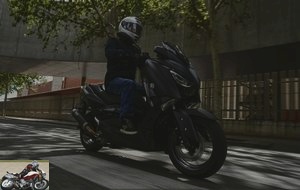 The Iron Max is fitted as standard with Michelin CityGrip, an excellent fit that provides excellent grip on all occasions. Good original tires are real savings because they do not have to be replaced by something else when buying them. And god only knows, if some small cars were fitted with soap, including among the Japanese in the past. Well seen for this original ride. 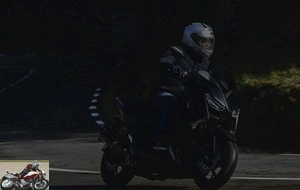 The saddle is quite comfortable. On the other hand, the double rear shock absorber is hard in compression and dry in rebound. And while it is sometimes surprisingly efficient on certain back bumps, it tends to return information from the road well when the road deteriorates. Advantage of this sporty firmness, the behavior of the maxi-scoot is very healthy, including in the rapid sequences of small virolos. On the other hand, the motorcycle type double triple front fork does an excellent job of not diving excessively under braking.. 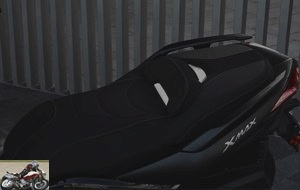 It’s hard to talk about feeling with the XMax because the handles are so hard and they constitute a strength training for the hands. The single 267mm front disc does the best it can and taken with a grip along with the 245mm rear helps deliver powerful braking, without plunging the front end thanks to a firm fork. The rear is quite sensitive and solo can trigger the ABS quite easily. We will thus have to apply mainly the front and a little rear to benefit from excellent braking, but nothing too much. In fact, the 300 deserves the double disc present on its big brother 400. 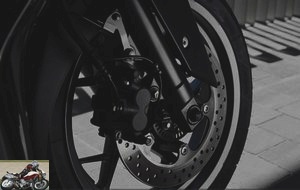 And when we talk about brakes, a parking brake is good and there is none. Fortunately, there is a center stand in addition to the side stand. To be used on sloping grounds, especially since it is easily placed on the power plant.

As we have said, the 300 benefits from Blue Core, Yamaha technology which allows for less consumption. And we checked, with an average consumption of 3.5 liters in fast, but flexible driving, which allows a range of more than 300 kilometers with the 13-liter tank. This is an additional advantage of the 300 compared to the 530 which rather consumes 5 liters per hundred. It is true that the 530 encourages much more to a more muscular driving as well..

The XMax 300 has a HUGE trunk, capable of accommodating two full-face helmets with still room for larger trinkets than a rain suit. In short, this is what we ask of a scooter, above all to offer space in addition to the look and behavior.

The two side pockets at the front are spacious and the one that locks on the left also allows you to recharge your smartphone. The leather finish on the outside of the storage compartment is one of the specific features of the Iron Max series. 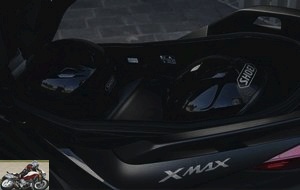 We wedge two helmets under the saddle

Few mid-displacement and even larger-displacement scooters offer so much space. A real asset on a daily basis.

Qualitative, well finished and even more in its Iron Max version, the XMax 300 is a real success while remaining financially affordable for the maxiscoot category. A thousand euros separate each displacement in their Iron Max version, 125 (€ 5,299), 300 (€ 6,299) and 400 (€ 7,299). For those who have the license, the choice is quickly made between 125 and 300 in favor of the 300 while the question may arise as to choosing the 400 because of this jump of an additional thousand euros. This also explains why it is always the 300 which trusts the sales compared to the 400 (4 times more sales of 300 than of 300 in France each year). But for those who want the "details that kill" brought by the Iron Max, then they can be seduced despite the additional 400 euros, still lower than the price they would have to pay if they wanted to accessorize it afterwards. And it is available in the Yamaha network.

The technical sheet of the Yamaha X-Max 300