Back to the radical for the Yamaha Supersport. With the adoption of injection in 2003, the R6 became more user-friendly without losing any of its formidable efficiency on the track. The 2006 vintage is a real surprise, both aesthetically and calendar. Given the rate of renewal of the machines, this sportswoman is one year ahead of the usual release dates. It is true that the 2005 version had not changed enormously.

This new version of the YZF 600 differs very clearly from previous generations. The look is inspired by the first R1, the front being pierced with a central air intake – it seems that this is the new fashion. The upper lip of this mouth descends into an appendage which extends the bubble and houses the night light. Strange and new, and this makes it possible to make a very clear difference with the air intake of the Honda VTR SP-1 and 2; Aprilia was less successful in this exercise.
Under the bubble, the counter block is borrowed from the R1, with a target stuck in the middle of the tachometer and figures that make you dizzy. In front, the gaze has gained even more aggressiveness. Under this intimidating facies, an inverted fork (equipped as it should with radial brake calipers) presents us in front of its dip tubes a protuberance similar to the anti-dive systems of the sports machines of yesteryear. Maybe a new trick to control the amortization…?
Behind the innovatively styled fairing panels, the boiler announces even more super-square engine dimensions. Success in MotoGP gives wings to engine engineers and their fairy fingers:

With a valve angle (they are titanium, and their aluminum cups) straightened and redesigned combustion chambers, the compression ratio has been increased to 12.8: 1. A double rail of injectors, controlled by a control system of the throttle (the YCC-T – Yamaha Chip Controlled Throttle, heritage of the competition M1) and managed by an electronic box 5 times more powerful than that of the R6 2005, supplies the unit over an exceptional speed range. Today, the red zone of the YZF 600 starts at 17,500 rpm – a formidable extension which exceeds the maximum power speed by 3,000 rpm. At 14,500 rpm, the boiler develops 127 hp; put 6 more with forced air.
Add to that lighter pistons and crankshaft, revised gear ratios, the EXUP system (Yamaha comes here for a 600 supersport, just after Kawasaki for its ZX-6RR) and an anti-dribble integrated in the clutch, and you understand that the new R6 is designed for maximum liveliness and efficiency … mainly on the track. Because the machine is not only inspired by Rossi’s YZR-M1; it is intended for the same radicalism, devoting itself without restraint to the search for maximum competitiveness.
Many expected that the R6 adopts the pot under the saddle … Nay. The bike is equipped with a very short titanium exhaust placed low and as close as possible to the swingarm. If this location favors the lowering of the center of gravity, it imposes a “banana” shape for the oscillating arm, of large section and very different from the old one..

MotoGP, when you hold us … Yam’s experience in this category benefits the R6’s brand new Deltabox frame. Its design responds to the so-called “straight-line frame” concept – the steering column, the swingarm pivot and the rear axle are aligned on the same plane. This allows an optimal distribution of stiffness. In places requiring the most rigidity, cast aluminum is used, and the parts requiring a certain flexibility are made of rolled aluminum. This material hybrid is also used for the swingarm, the axis of which is positioned 20 mm higher.
The new YZF fork is, as on any sport, fully adjustable, in preload, compression and rebound. Except that here, a new setting allows the low and high speed compression to be adjusted independently. Dual compression adjustment is also found on the rear shock.
Although very similar to the old one, the braking system is new in order to respond more effectively to the new engine and chassis performance.

The passenger footrests? Not seen. Maybe the factory has found a trick to disassemble them or hide them easily in case of solo use. The R6 being presented in this single-seater configuration, no ambiguity is allowed. The passenger, forget !

Today, the R6 has reached a new level in its evolution. From the old one, it only uses the name. Because this new generation has nothing to do with the old one anymore. Except this taste so pronounced for the track, that the 2006 version intends to dominate without sharing.

It is not by raising its voice but by screaming that the R6 claims to establish this domination. A howl that goes beyond anything we have heard so far in the 600 sports. In its shrill cries, the Yam will seek all the gniak necessary for its only objective: performance. In absolute terms, as on any supersport, you have to keep the tachometer needle constantly above 10,000 rpm to really use the engine. But on the new R6, once you have crossed this milestone, you have nearly 8,000 trs available to you before hitting the red zone. A huge advantage on the track, especially since no current competitor can boast of having such a range of use. a real turbine with pretensions quite comparable to the racing machines of the 600 championship. The needle saturates at 18,000 revs … Barely time to upshift and taste the efficiency of the gearbox (much softer than ‘usual at Yam) that it is already necessary to negotiate the technical parts of the circuit which will highlight the qualities of the chassis of the R6.

Under braking, which remains a benchmark in this area, the sports car highlights the quality of its suspensions. The mono-shock absorber combines remarkable progressiveness and good comfort on small irregularities. In itself thanked its many possibilities of settings. An excellent point for the rear; a certain restraint for the front. With the factory settings, the fork does a very good job but without the rigor that can be found on a Kawa ZX-6R. You can dive into the rope and tack in a squirt, provided you accept the front gear sometimes a little too fickle. When we whip it seriously, we do not fully feel the front. Compared to the Kawa which is ultra-rigorous by its direction, the Yam will take away a bit of feeling but will be more accommodating with your small driving errors..

Racing engine, adjustable suspensions galore, anti-dribble in the clutch, geometry of compe-client machine, battery of double-injectors, strategic parts in titanium, braking hell and endless extension … You could almost believe in reading these technicalities that we are dealing with a Superbike R7. Not far away ; it’s an R6 and it’s an overdose of technology and efficiency. It has become (or confirmed) a pure track machine, even sharper than a razor … with an even more rare price than that of a seven and a half. € 11,200 for a 600! It’s starting to get rough. For a trip to the countryside or to learn to fly, it is difficult to justify. To own the top of technology and the track machine, it makes perfect sense. 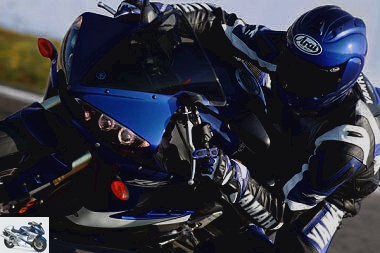 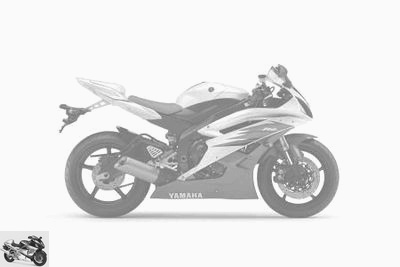 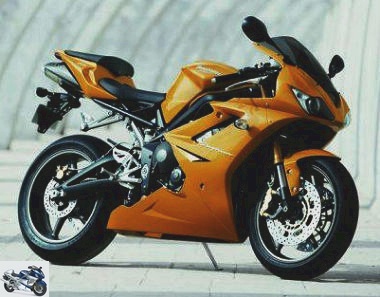 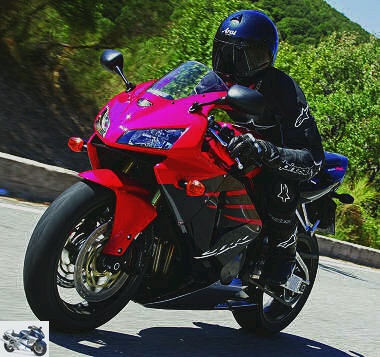 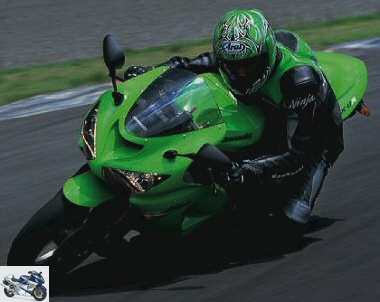 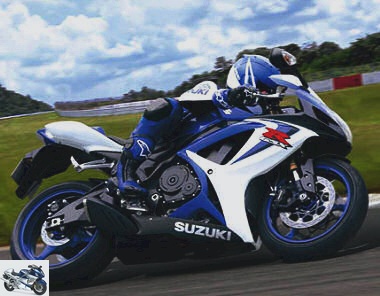 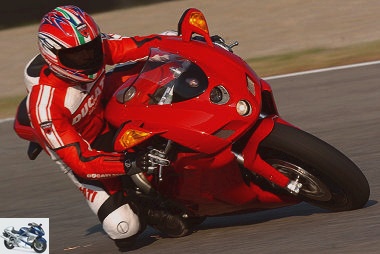 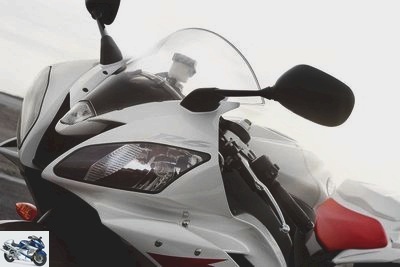 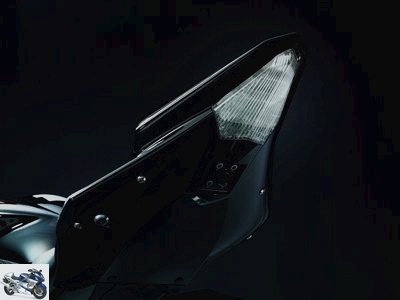 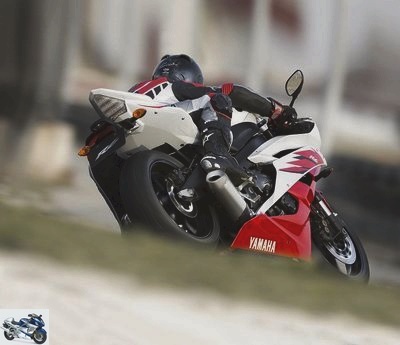 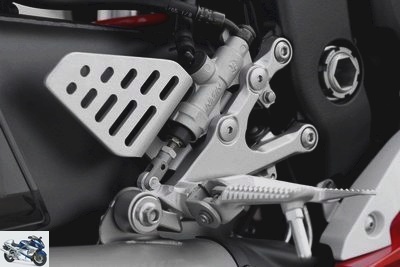 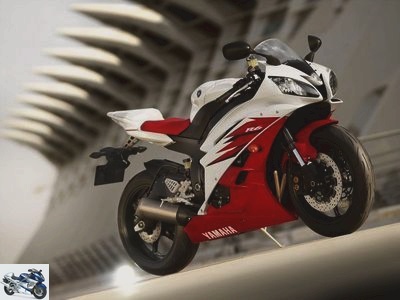 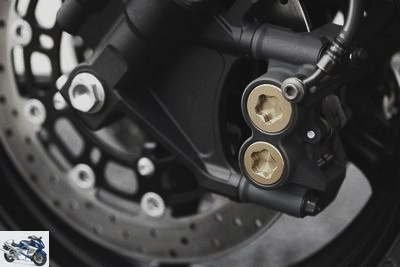 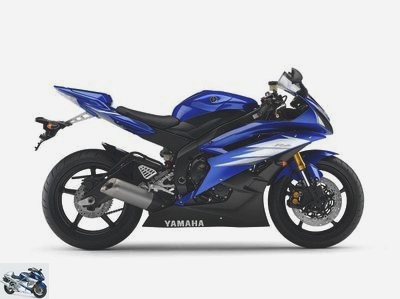 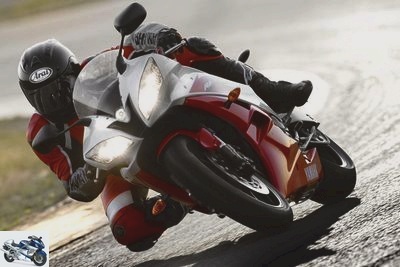 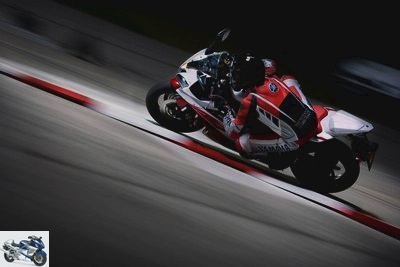 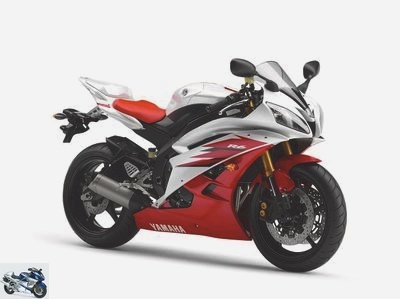 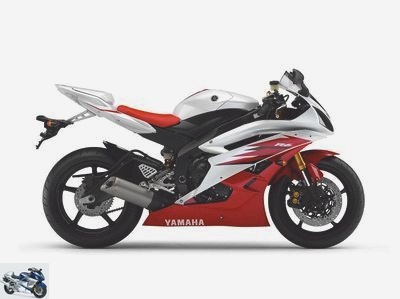 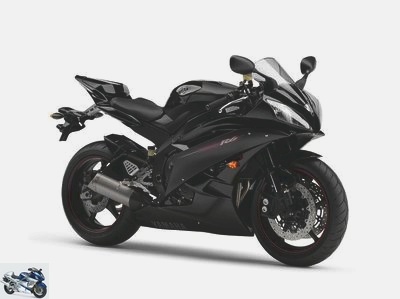 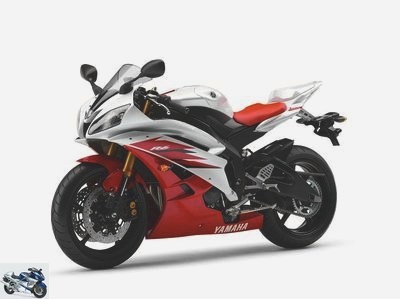 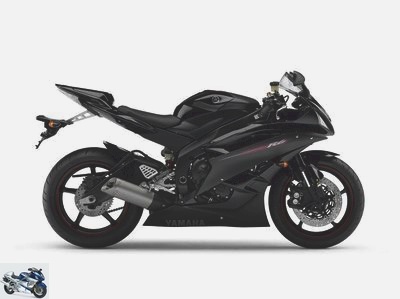 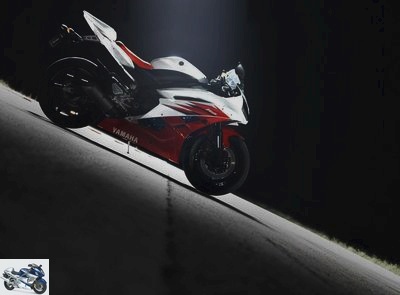 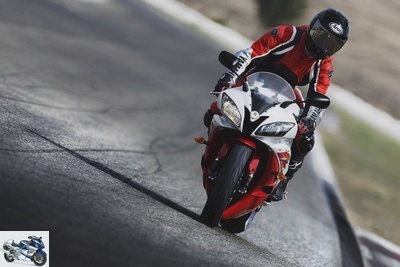 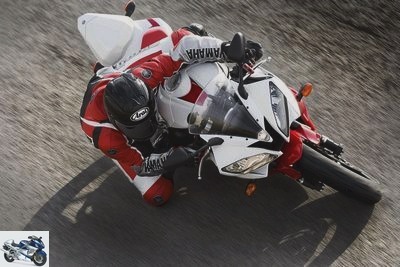 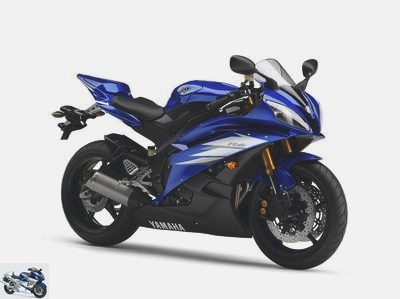 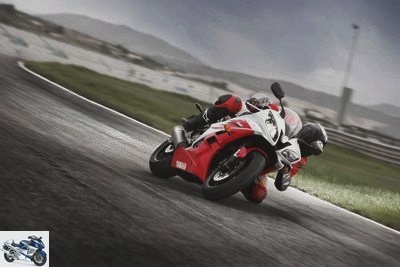