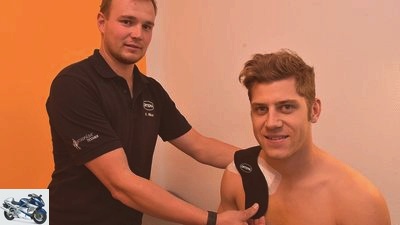 Despite broken collarbone: Schrotter starts at the GP of Thailand

Ortema’s orthopedic technology specialists have adapted a special protector to Moto2 rider Marcel Schrotter so that he can compete in Thailand despite multiple collarbone fractures.

Bad luck for Marcel Schrotter from the Intact-Kalex team: During a highsider free practice session in the Moto2 class at the San Marino Grand Prix in Misano, the Bavarian broke his right collarbone four times. After the operation in Italy, a special plastic protector shell was made for the Kalex pilot in the orthopedic clinic in Markgroningen near Stuttgart in order to keep the pressure of the leather suit on the hardly healed wound as low as possible.

Schrotter is trying to defend his eighth place in the Moto2 World Championship at the GP in Thailand (October 6th). The staff at the Swabian clinic are very motorcycle-savvy and, in addition to a large number of off-road world champions, also provide GP stars such as Tom Luthi and icon Kevin Schwantz with protectors.