The Ducati Hypermotard 796 is the variation of the Hypermotard 1100, presented at the Milan Motor Show in 2009. From a distance, nothing can differentiate the two models, very very close aesthetically. Yet the 796 is closer to the Monster 696 with its 81 horses and 7.7m / kg of torque than to the big sister with its 10 horses less, its 3 mkg of torque less, its 12 kilos less on the scale and a lower saddle of 20 mm. So less power, less torque, for a bland but easy bike for beginners. ? 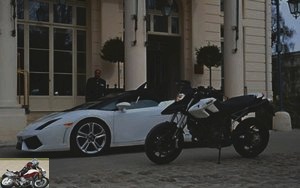 In its white livery – pearl pearl – we can not distinguish at first no difference between 1100 and 796 cm3, apart from the color of the frame, matt black against the red of the 1100. 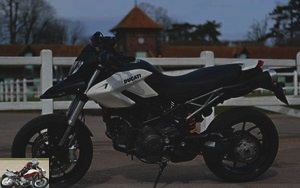 We find, like the big sister, the duckbill, the elegant single-sided arm, the – almost – fixed saddle, the folding mirrors placed in the horizontal line of the wide right handlebars, the indicators in the handguards, the fuel cap. nut-shaped (not hinged). 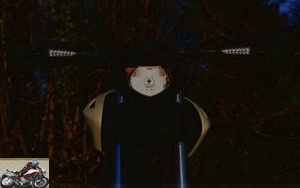 Finally, we notice the differences in terms of the speedometer (inherited from the Streetfighter!), The commodos, the non-adjustable front fork, the brakes, the steel handlebars or the plenum chamber under the engine…. but you really have to look. In short, it’s a real mini hypermot (and not a sub hypermot), neat, for 2,700 euros less than its big sister !

With his "only" 825mm seat height, the 1.70m rider can barely touch the ground with both feet. but that does not interfere in any way. First it’s better than the 1100 (where you feel much more perched high), and then the featherweight of the beast of 167 kilos dry (189 kilos all full), gives the impression of land on a toy. The saddle is welcoming and the thighs easily squeeze the perfectly shaped tank. 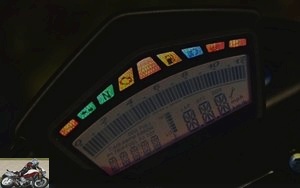 The beacon and full headlight are operated with the same switch, behind the handlebars for the pilot; it is practical but it also causes untimely spotlighting. 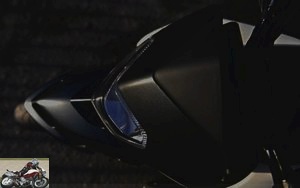 The arms spread wide to take hold of the handles. The bust leans slightly to dominate the headlight, resting well on the front.

We unfold the mirrors, which have the merit of not showing the elbows, but which offer limited vision.

The air-cooled 803cc L-shaped Desmodue Twin (don’t investigate why the model is called 796) snorts quietly. It hardly vibrates. The kickstand is easily raised. 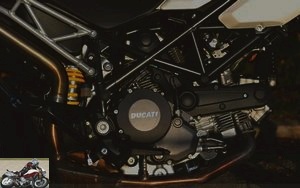 First, the right grip turn immediately sends. Hmm, that’s closer to a hairy 800 than a little 600! But the bike is very easy to handle from the first turns of the wheel. You immediately feel at ease and in your element, without fear or special precautions to take.

The Hypermotard is an extreme toy in the city, squeezing effortlessly into every mouse hole, aided by a large lever arm, featherweight and excellent turning radius. The engine is punchy, dynamic, with pick-ups, even on the last report at 40 km / h (ok, at this speed it knocks anyway).

There are only the mirrors, placed on the outside, which easily touch all the other mirrors…. therefore must be folded under penalty of seeing angry motorists after seeing their retro touched all the time. 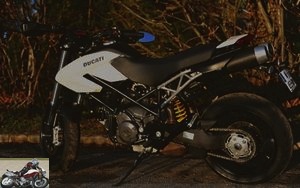 The first is almost violent and requires dosage, the second is softer but still very dynamic; the bike almost appreciates the 3rd to manage to wind up quietly. Anyway, the first reports break from 8,500 rpm, but at speeds largely prohibited in town anyway…. except that with the gnac of the engine, it is really easy to get to the breaker in town. 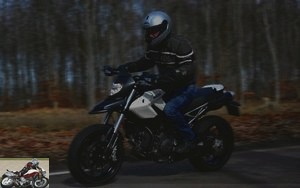 In fact, no need to wait for maximum torque to take advantage of the machine, which reacts from 2,000 rpm, muscle at 3,000 rpm and increases power even more expressively at 4,000 rpm.

The hypermotard takes off almost violently on the highway. At 125 km / h, stalled at 5,000 rpm, I’m already expecting the wind and my head to be torn off…. but nothing ! The tachometer takes 1,000 rev / min, hangs 150 km / h without fatigue. It is necessary to reach 1,000 additional rev / min, evening 170 km / h (on German autobahn as for the 150 km / h) to start to feel the pressure on the nape of the neck. The frontal shape combined with the original nose screen does an excellent job here. The hypermotard only asks to run fast and always holds the pavement particularly well … especially since the engine speed is no longer limited to 8,500 rpm as in the first reports. 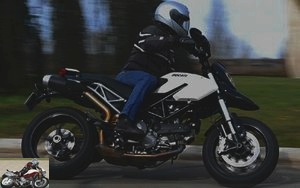 After having excelled in the city and almost enjoying the motorway, the hypermotard embarks with envy and delight on the departmental roads. Available at practically all speeds without hole, it accepts everything from the pilot … and even more with its APTC clutch which limits the blockages of the rear wheel on violent downshifts. So, she can really whip in all directions, for fun and more. 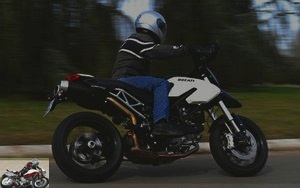 The rear brake is useless to slow down the ardor of the mount. At most it is used in town, to slow down gently before a fire, or to stabilize the bike slightly when entering a turn. At least there is no risk of blocking !

The front brake, on the other hand, requires skill. It offers at first glance a soft power and a good feeling but turns out to be particularly powerful or even brutal when you really grab it.. 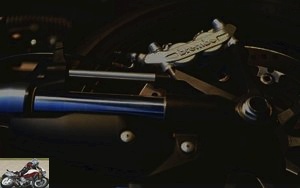 The saddle is wide and long and allows you to position yourself well, but also to move well on it. The suspensions on the other hand prove to be sensitive to the connections of the road, instantly raising the information in the back. If the hypermotard is pleasant, even ideal on smooth asphalt, as soon as it deteriorates, the driving is similar to a rodeo. 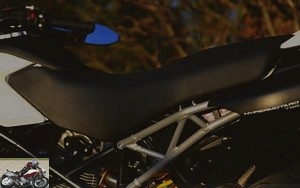 Contrary to appearances, the passenger – small in size – is well off. The rear spoiler hides grips, which are just a little slippery depending on the gloves. But the comfort is there, at least for short distances. 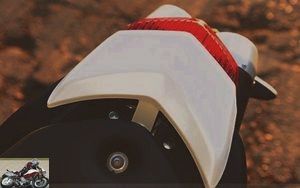 In cool driving, consumption drops below 5 liters per hundred. But even when opening, with dynamic driving in the city, and fast on the highway, consumption turns out to be around 5.9 liters / cent. Fortunately, because the tank is only 12.4 liters, or barely 230 kilometers of autonomy … in the line of hypermot, but still. Because frankly, it can make the road and is not reduced to the game in a reduced perimeter. 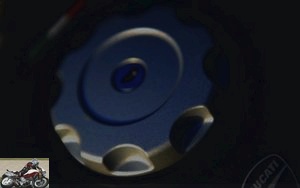 There is no place under the saddle, which does not lift … except with a key from the tool kit, itself housed in the left part of the fairing, itself removable by three screws. In short, she is not made to be lifted.

There is no way to put a magnetic bag on the front. On the other hand, at the back, the trellis frame makes it easy to secure a bag, without damaging the paint.

The mirrors fold and unfold easily, but as a result, do not systematically keep their initial position, requiring to be readjusted.

We regret the absence of a fuel gauge.

Far from a sub-version of the Hypermotard 1100, the Hypermot 796 turns out to be a model that is easy to handle, light, manoeuvrable, playful and provides its share of sensations…. largely served by a rewarding look. He still gains by losing a tooth on his gearbox output pinion (14 instead of 15), which brings him even more nervousness and gnac at low and medium revs (with the risk, however, of no longer conforming to the ‘origin and pose insurance problems). With torque available very early on and performance close to a hairy roadster, the Hypermotard is intended for the rider who wants a machine that is expressive but pleasant from day to day and relatively versatile..