Electricity is everywhere! In development for several years now, electric vehicles are multiplying both in the automotive sector with the Renault Zoe and BMW i3 as well as in motorized two-wheelers with Zero Motorcycles and other BMW C Evolution scooters..

However, if we focus on the sales figures of the scooter market, we realize that the phenomenon remains almost at a standstill, despite an offer that continues to grow. Thus, sales of electric scooters equivalent to 50 and 125 only represent 1.17% of sales of 50 and 125 cm3 scooters..

Do the difficulties experienced by electric power to impose itself come from a lack of performance of the machines or is it the consequence of an a priori still too marked among urban users? We tried the Govecs range of electric scooters to see it a little more clearly. 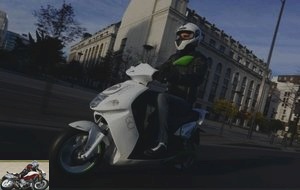 The Govecs range is made up of four models equivalent to thermal 50 cm3 and 125 cm3, all sharing the same cycle part and distinguished only by their color and their traction column..

Aesthetically, the scooter displays modern and slender lines. Bigger than a classic 50, it is also more compact than a 125 and is more in the size of the Yamaha D’elight and other Honda SH but without their flat floor. The large two-seater saddle is displayed in two gray and black tones separated by a colored border. The absence of an exhaust makes it possible to take full advantage of the single-sided swingarm. 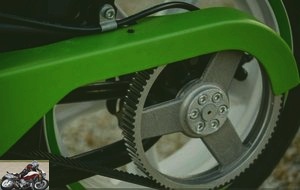 In order to be able to be differentiated, each model has a specific color that adorns the mirrors, the rims, the engine, the belt protection or the patterns of the fairing. Blue is assigned to S1.4, green to S2.4 and red to S3.4, the equivalent model 125.

Overall the level of finish is quite clean even if some materials used do not offer the most beautiful appearance. Here, we do not make frills but the work is rather well finished. 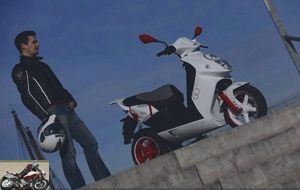 Although compact, the Govecs is not necessarily very accessible for all pilots. Nestled at 790mm, the fairly wide saddle could pose some problems for smaller riders when it comes to putting their feet on the ground. However, the heaviest model weighs only 120 kilos, so maneuvers are carried out without any difficulty. The commodos are big enough and fall by themselves under the thumbs.

The analog meter clearly and legibly displays speed and charge level. The dashboard also has a charge indicator and a total / partial trip. Note that the display does not suffer from reflections from the sun. 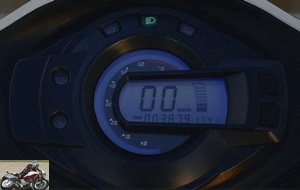 It is in the most total silence that the Govecs scooter sets off. The manufacturer has also thought of installing a safety device to prevent any untimely start-up. In the total absence of noise, it is difficult to tell if the engine is running. The pilot is therefore obliged to switch the ignition to "off" before putting it on "on" for the scooter to start..

The acceleration is done in a completely linear way and without any brutality. An observation which is particularly true for the S1.4 and S2.4 equivalent to thermal 50 cm3. Thus we quickly reach 47 km / h on the odometer. 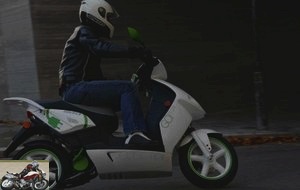 The S3.4 offers more fishing with just as much fluidity but makes it easier to get out of traffic at a red light. This quickly and easily reaches 80 km / h. Conversely, the two 50s are quickly limited by their homologation.

When it comes to handling, the Govecs are real bikes. With a total weight ranging from 100 kg to 120 kg and a very low center of gravity, these three electric scooters have remarkable agility. The brakes, on the other hand, offer enough bite to respond to engine power and stop without locking the wheels.. 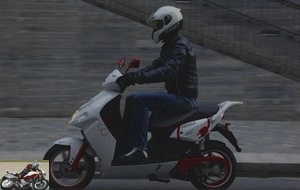 The whole range is equipped with an eco mode to limit the torque. This device will only really find its use on the 125 if the road is slippery..

This is probably one of the weak points of the Govecs electric range. If the driving position is straight and natural, a few black spots tarnish the picture. Thus, the saddle would have benefited from being a little more flexible, because after an hour of driving, its firmness begins to be felt..

Question hardness, the suspensions also know a radius. The rear mono shock absorber is extremely rigid and transmits defects and bumps in the road to perfection. The cobbled streets are absolutely to be avoided. 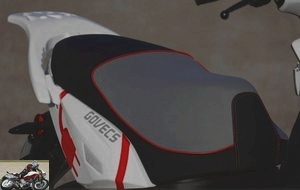 On the practical side, the Govecs S1.4, S2.4 and S3.4 provide minimum service. The apron is devoid of any storage but has on the other hand a useful 12V cigarette lighter socket and a hook. The trunk under the saddle has increased in capacity compared to the present vintage and now has a capacity of 10 liters. Concretely, it is possible to accommodate a jet helmet provided that its visor is sufficiently small.. 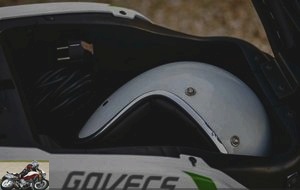 We will not speak here of consumption but of autonomy. Because this is the major concern of electric vehicles. The S2.4 and S3.4 scooters are fitted with the same 3 kW / h Lithium polymer battery. Less energy intensive, the S2.4 has a range of around 80 km while the 125 equivalent has to be content with 60 km *.

The S1.4 is the only model in the range to be equipped with an extractable battery. The latter comes from the same technology but has been reduced by half to be usable on a daily basis. Indeed, the 3kW / h batteries still display 30 kg on the scale … That of the S1.4 goes down to 17 kg. Weight loss, but also loss of performance. Half the weight, the removable battery has half the autonomy. 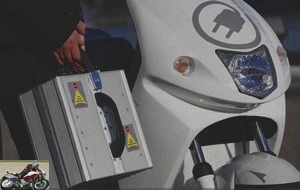 In terms of charging, each scooter has a charger. A 5m cable is housed in the trunk and can be recharged from any mains socket. Note that in the big cities, the classic 220 volts outlets are multiplying as in Paris where they are now present on certain velib and autolib terminals. The S1.4 is for its part equipped with a built-in charger and an external charger that can be plugged in anywhere.

Entirely developed and assembled in Europe, Govecs scooters offer a real alternative to urban thermal scooters with comparable performance in terms of dynamics but limits in terms of autonomy. But it is above all the purchase price that remains a major obstacle to the expansion of this technology, despite almost zero maintenance costs and an insurance price almost halved. Thus, the S3.4 today has a hard time competing with the competition because of its starting price at € 6,830 against € 2,000 for an equivalent thermal model like the Yamaha D’elight..

In an attempt to remove this brake, the German manufacturer has set up several financing and rental offers with purchase options allowing the purchase of a scooter from € 139 / month over 4 years..