In electric, there are machines with a futuristic design, plastic blocks and machines with a retro look. The Rider 5000 is part of the latter category. And as long as you go electric, you might as well do it with class and elegance. But should we then give up the power or the practical aspects? Not necessarily and this is precisely the case with this Rider 5000, which is a true 125 cm3 equivalent. Test… 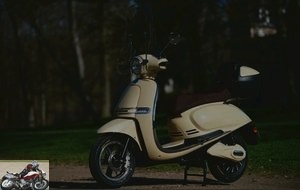 Leave the Rider in the street and you will hear passers-by notice this "Vespa". And the look undeniably appeals to models from the 50s / 60s, even more in its beige livery, complete with this beautiful brown saddle. And that’s without counting the top-case (optional 99 euros), in identical colors. We could do without the windshield, optional, but the Rider 5000 is really nice and nothing shows that it is an electric machine on the outside, except the absence of exhaust.. 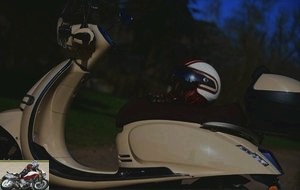 After, when we look more sharply, we notice a more curved and more modern apron. It’s elegant and consistent, compared to many electric scooters that quickly turn plastic when you get close.. 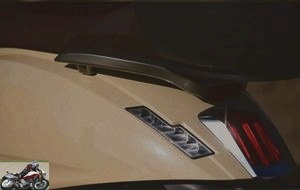 Only chrome plastics could do a little more quali.

Below, we find a 5000W motor, hence its name (there is also a cheaper 3000W model and another in another more powerful style like the 9000W), powered by a lithium ion battery now 3.6 kWh , 52 Ah (+ 25% in 2020 compared to 2019). The scooter thus delivers 6.8 hp in the end, a power hardly comparable to the thermal so the driving impressions are different, in particular thanks to the torque available immediately..

Everything is distributed by the young French company Go2Roues, the Rider brand being the French distributor’s own brand, even if the model is visually very close to the e-presto 125 model from Easy-Watts. The Rider 5000 is on the other hand more powerful, with a higher price as well.. 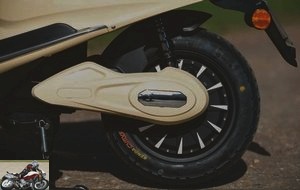 The saddle is relatively high at 810mm, but at least both ends of the feet are on the ground. Above all, the featherweight of 98 kilos, is immediately felt on the handlebars. Suddenly, even the passenger does not feel when he climbs behind. The hands fall naturally on the handlebars with a very natural overall position: the legs do not go up, nor the arms and there is room for the legs between the saddle and the apron, enough to satisfy the older ones. There is plenty of room on the floor, with an almost flat floor. 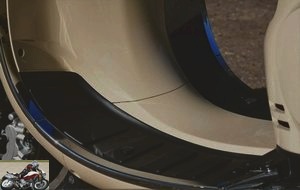 An almost flat floor with room for legs and knees

Under the eyes, we discover a very nice retro round counter with the most beautiful effect. And if when it lights up, we guess plenty of display possibilities, in the end, we just have a totalizer, a partial trip (which resets to zero each time we start), the speed, the battery voltage and power used while riding with a remaining battery indicator. Everything is displayed in a single blue color, sober. 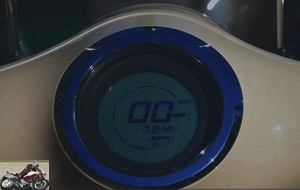 We regret the lack of display of remaining range as well as a real partial trip that would allow us to know how many kilometers we have covered since the last charge. It must therefore be memorized from the totalizer, the display of which alternates between mileage, partial trip and battery voltage which means that you sometimes have to wait while driving to see the number you want to be displayed. And there is no mobile application here that would provide more information. There are also no modes, which allow you to choose between power and autonomy. On the other hand, we have a reverse gear, not mandatory given the lightness and maneuverability of the scooter, but still practical for parking. Fortunately, the driver still has a brain and can therefore influence the range depending on the use of his right wrist. A small clock would have been a plus for an urban vehicle. 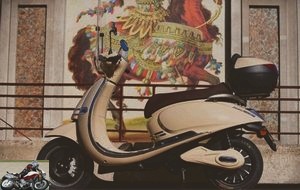 Key in the switch, once the small cover is unlocked, the scooter is immediately operational, with a simple flick of the right wrist. And off we go … in the greatest silence. The first turns of the wheel are natural, dynamic but without excess, with a stable handlebar. 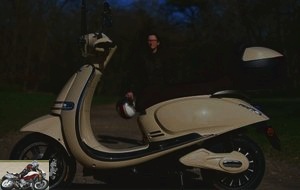 Easy to learn by all sizes

The Rider 5000 is a real pleasure in the city, with real acceleration, without violence or jolts. Light and manoeuvrable, it passes without thinking between the cars and slips without difficulty into the smallest gap. The mirrors are legible and send just the right amount of information. The braking is then up to the expectations of the machine, effective with rather a good feeling, while requiring to take the two levers to benefit fully.. 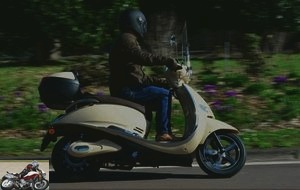 But then we appreciate the comfort provided, between thick saddle and double hydraulic shock absorber, which do their job very well both solo and duo..

The Kenda tires do not provide absolute confidence at first, but it must be said that the test model was new and the tires shiny. After a hundred kilometers, we started to feel a little more the grip compared to the first kilometers, until forgetting the first impressions.

The first big battery sticks disappear after about twenty kilometers, followed every 10 kilometers following by another, until flashing. And when it flashes, you go into "slow" mode, with acceleration worthy of a bike and a maximum speed that will protect you from flashes in the city.. 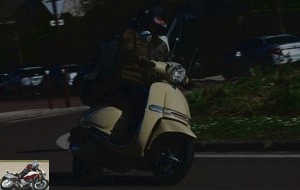 The Rider 5000 quickly picks up 90 km / h, even is capable of reaching 101 km / h, including in duo, once well started and when the battery is well charged. The times are not crazy at 90 km / h, but allow you to do peri-urban without worry. 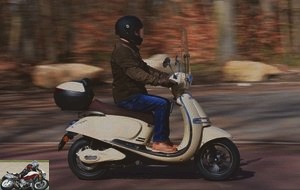 The Rider 5000 is more at ease on departmental roads, where its lightness and maneuverability allow you to string together virolos, including duos, with pleasure. The driving position associated with the protection of the windshield make it possible to chain the kilometers, while swallowing the defects of the road.

The power delivered is almost identical during the 80% use of the battery, giving almost the same performance, especially at start-up and at top speed. Then, after 80 kilometers, we fall into reduced mode, which starts as quickly as a bicycle, even if once started, the scooter can still take 35 or even 45 km / h. But if we are then on expressways, it is really limited. And yet, it is still capable of driving 10 good kilometers or even a little more. It must be said that this is a use with many pairs, ribs, with many standing starts. Solo, in milder conditions and accepting the last kilometers in slow mode, the Rider 5000 can cover the 100 kilometers of autonomy.. 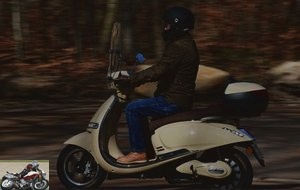 A comfortable scooter, including a duo

With a single disc front and rear, the Rider 5000 brakes well and hard, with good lever feel, aided by efficient but not too violent CBS combined braking. It is thus difficult to block the rear and we will not hesitate to take both levers at the same time to stop really hard. 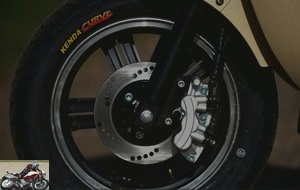 Single disc at the front, sufficient

The saddle is comfortable and the two shocks do a great job, including on the cobbles. There are better on road motorcycles, but it is the best electric model in terms of comfort, especially in duo. The passenger benefits from removable footrests (via a small push button) and ideally placed and easy to grip grab handles, even with heavy gloves. Better footrests are also well placed for the driver who does not receive kicks in the calves as is often the case on poorly designed scooters. 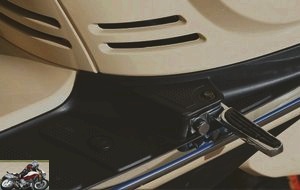 Passenger footrest, folding and unfolding via a push button

On the other hand, once there is a top-case, neither the driver nor the passenger is too imposing because it is quickly stuck-tight, especially by the final shape of the saddle at the rear. , which deserves to be flat in order to offer a little more perspective. 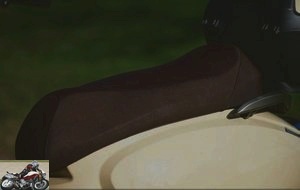 There is a lockable storage compartment at the front. There is room under the saddle to accommodate a small jet (type Nolan N21) and the top case is rather very roomy despite its only 28 liters. Note that it does not open like most top cases, but once you get used to pushing just above the key, you find it even easier to open than usual. We can thus choose to put the anti-theft device under the saddle as well as in the top-case.. 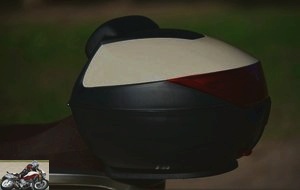 We regret the absence of a USB socket in the front storage compartment. 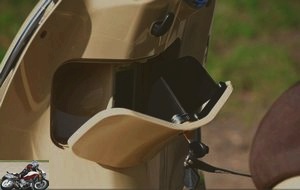 Pocket in the lockable apron

We appreciate the central stand in addition to the side stand, especially since the Rider 5000 is placed on the central very easily and without force..

The scooter comes with a small 8A external charger. And since the battery is removable, you can take the battery home to charge it. But if we have a garage we will choose to do it in the garage, for two reasons. The battery is heavy (17 kilos) and the charger makes a real blowing noise while charging. We did this to take him to the editorial offices, but luckily there was an elevator and we could park in front of it. We wouldn’t have transported her all over the street, from the two-wheeled parking lot.

You then have to wait a little more than six hours to see the battery recharged (logical with a 52 Ah battery and an 8A charger, i.e. 6.30 hours), which is manifested by a green light on the charger and that’s it. There is no indication of the charge level on the battery. And since you have to switch off the circuit breaker (under the saddle) and remove the internal connection plug for the charge, you cannot check the current charge level on the meter either.. 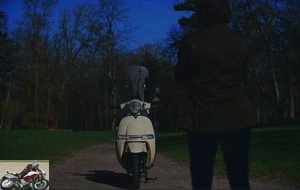 The Rider 5000 is my current favorite when it comes to electric scooters for its looks, its comfort, its power (sufficient including a duo) and its reasonable price of 4.999 euros, compared to a Vespa Elettrica in particular. A power of 5kW thus proves to be the good compromise for an urban use between a "fair" 3kW and the prices which often rise with powers higher than 7kW. I regret on this model a meter lacking information and the absence of modes. But with the aids and bonuses (900 euros for an individual, 2,400 euros of ecological bonus from the Île-de-France region for a professional), we drop the price of the scooter to 2,599 euros, a price lower than a good number of thermal models with an additional financial gain in use in terms of maintenance cost and fuel budget. It then remains to choose between the different colors, from the beige of this test model to red or sea green in the purest retro spirit or the most sober black (mat or shiny)…