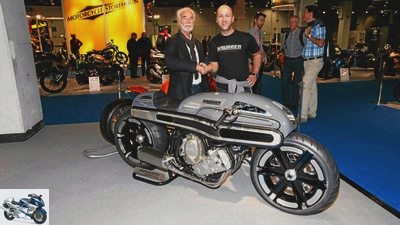 INTERMOT tour
Courage to be beautiful

While the journalist colleagues jostled their way from one innovations press conference to the next at the INTERMOT motorcycle fair in Cologne, a MOTORRAD editor used the time and space to take a tour far away from the mainstream with the designer Hans A. Muth.

What do you want with the old man at the fair? He’s just nagging anyway. ”The admonishing and rather direct words of the colleague are understandable, because anyone who has only seen the last public statements of the designer Hans A. Muth superficially (for example in the interview on the BMW study“ Concept Ninety ”in MOTORRAD 22/2013), may actually have got the impression that there is a typical bugger at work.

INTERMOT tour
Courage to be beautiful

The former BMW designer and creator of the legendary R 90 S and R 100 RS is polarizing: many fans of BMW youngtimers hang on his lips; for quite a few current BMW managers, however, Muth is a red rag. This is mainly due to the fact that the 79-year-old Muth cannot do much with the, from his point of view, often quite conceptless plastic lid-here-plastic lid-there design of current motorcycles. Especially the Bavarians, but also Japanese motorcycle manufacturers, get to hear his displeasure again and again.

The “old” man has a young taste for design

However, he regularly proves that Hans A. Muth, who is still active in the industry, has no fundamental problem with current design. Most recently with his help with the design of the Suzuki Fat Mile (MOTORRAD 19/2014). And if you talk to the native and convinced Prussia about (motorcycle) design for a little longer, you can also experience the laudatory courage, which can definitely be found in the current motorcycle scene examples of good design. This is exactly what an INTERMOT tour of a different kind was all about.

The aim was to find as many products as possible that the designer Muth considered “beautiful” – products, not just motorcycles, but also accessories and clothing. While the motorcycle-savvy world press rushed from one press conference to the next, the MOTORRAD editor and motorcycle designer strolled through the Cologne halls looking for beauty. Totally subjective and without any claim to novelty.

They also found what they were looking for at somewhat remote stands on the exhibition grounds and from rather unknown providers. The term “beautiful” was expanded from time to time to “beautifully shrill” or “very beautifully cheeky”, the main thing is that the object aroused the curiosity of the master in a positive sense. And his judgments were really not that wrong, because of all things the Muth favorite in the unofficial beauty category “beautifully consistent” officially won the world title in the freestyle class of the renowned “AMD Word Championship of Custom Bike Building” a few days later “, The world championship for motorcycle converters. Which would probably prove that the “old” man still has a young taste for design.