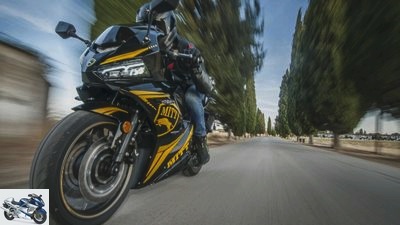 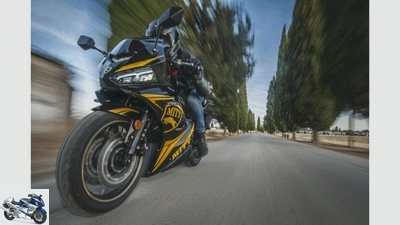 1/9
The technical basis for the Mitt 125 GP 2 is a motorcycle from China giant Zongshen. The Lexmotos from England sell the same models under different names. 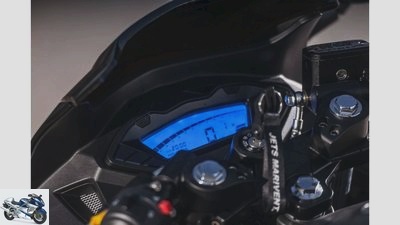 2/9
The GP2 from Mitt has a simple but informative LCD display. 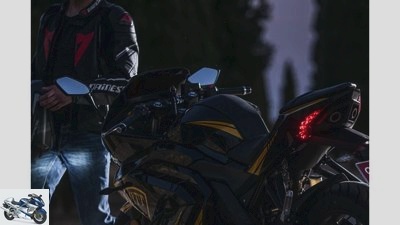 3/9
Illuminated all around by LED, with an exhaust system integrated in the rear. 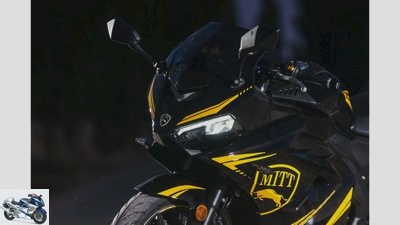 4/9
The new front of the GP2 looks independent. The GP, which is also offered, looks very similar to a certain BMW supersport machine. 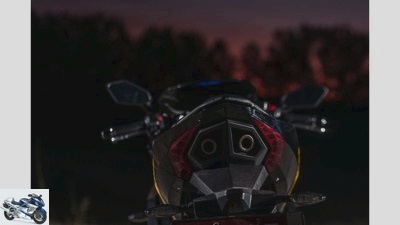 5/9
The two exhaust pipes are reminiscent of old two-stroke racers. 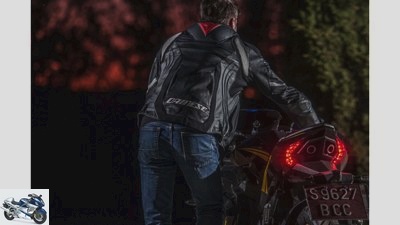 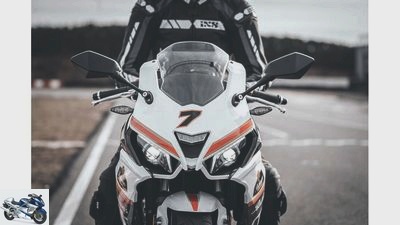 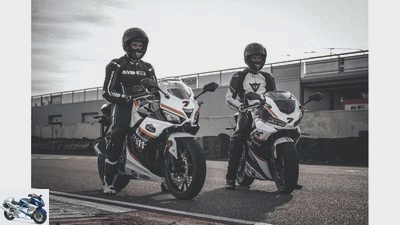 8/9
In terms of chassis, all three machines are similar. The 400 series, not shown, has a slightly longer wheelbase and comes with ABS instead of a partially integrated brake system. 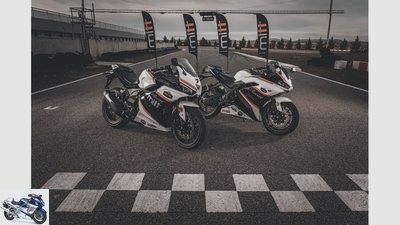 9/9
Despite some differences, both machines cost 3,195 euros in Spaninen.

Zongshen motorcycles developed for Europe are sold in Spain under the Mitt brand. In England they are the same motorcycles under the Lexmoto brand. Technically identical.

After the British colleagues from Lexmoto the little sportswoman LSX 125 just launched, the Spanish brand Mitt is following with the very same motorcycle. The technical basis is a chassis and drive from China giant Zongshen with an exhaust system integrated in the rear, similar to the two-stroke racers of the old days.

But nothing oil burner: The little Ibero athlete drives a single cylinder with 125 cubic meters and four strokes. The water-cooled single develops 13.8 hp at 8,750 tours and brings the GP2 to 110 km / h over six gears. A slim 155 kilos stretch to a jagged 1,313 millimeter wheelbase with a seat height of a moderate 790 millimeters. Unusual, somewhat 1990s style, are the tire dimensions with a diameter of 16 inches. Braking is done by a semi-integral hydraulic brake system with a semi-floating double disc at the front and a single disc with a floating caliper at the rear. The simple LCD instrument provides the most basic information.

Mitt sells the new GP2 in a black and yellow paint scheme or in sophisticated black, white and orange for 3,195 euros. Compared to the British Lexmoto for the equivalent of 2,900 euros, there is no big difference – probably not even from the conditions between China, the EU and Great Britain.

Will the Chinese become serious competitors for the established motorcycle manufacturers??

No, they never reach their level.

Mitt and Lexmoto. Two brands from two countries, the same technology and probably only through the actual manufacturer Zongshen from China “in contact”. If the individual markets were always supplied with slightly different models, this time seems to be over: the same mopeds under different names in similar markets. Economically only logical.