The Methuselah of motorcycle racing

Birthday ! Moto Guzzi celebrates its 100th anniversary this year! In contrast to this longevity, there are factory racing motorcycles. Because a racing bike is not made to last long but to win. Above all, every manufacturer seeks to be the fastest, to test the latest possibilities and this often means trying and rejecting several different options before finding the winning package. So, as soon as the new bike is ready to race and win, it replaces the old one to improve lap times and win races. Also, the idea that a motorcycle factory can remain competitive for 18 years is almost a utopia. And yet, this was the case with the Moto Guzzi Bicilindrica 500, with almost instant success from his debut until his last Grand Prix at the highest level. But during all these years, the bike has undergone many evolutions, notably from an overhead valve engine without rear suspension to a more modern version with cams and swingarm. We tell you about it and especially we try it, because yes, it still drives ! 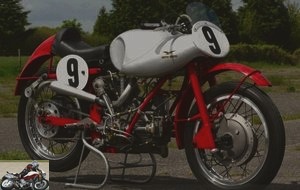 Since its inception exactly 100 years ago in 1921, Moto Guzzi has always stood out by adopting modern design features that often took years to democratize. Engines with integrated gearbox, primary gear transmission, rear suspension or four-valve cylinder heads are just a few examples of early Guzzi innovations. However, it is on the contrary a very conservative motorcycle that gave birth to the Bicilindrica.

It was the first Moto Guzzi four-cylinder racing engine, a water-cooled overhead valve supercharged inline-four that was installed almost horizontally in a hardtail frame and mated to a 3-speed gearbox. First tested in 1931, Guzzi’s lakeside developed 4-legged Guzzi seemed inferior in design to its more powerful, towering overhead cam rival OPRA, which was ultimately purchased by Gilera for form the basis of the 500 Rondine.

Moto Guzzi’s testing went badly from the start. Designer Carlo Guzzi soon realized that the bike was too heavy and not powerful enough to be competitive. Yet the Guzzi single cylinder dominated the GP 250s. It was also compact, with the cylinder horizontal, leaving plenty of room in the center of the frame, even with the very low driving position typical of the Guzzi. Carlo then had the idea of ​​filling this space with a second cylinder to produce a light, compact, but unconventional engine. This is how the very first two-cylinder Moto Guzzi was born in 1933. ! 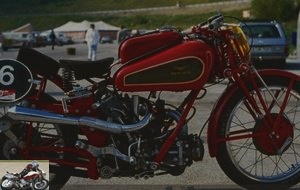 Its engine thus has the cylinders spaced at an angle of 120 °, a construction unlike any other V-Twin and which has never been imitated since. A vertical shaft and gears on the right side of the crankshaft drive the single overhead camshaft, via a housing also containing the oil pump, the tank of which is placed at the top of the fuel tank. The Bosch magneto is installed between the cylinders, driven by a series of spur gears at the end of the crankshaft. This is an unusual format, because unlike most other V-twins, the two connecting rods do not share a common crankpin. Instead, the integrated crankshaft incorporates two offset crankpins on either side of the center bearing, which completely eliminates secondary vibrations otherwise endemic to such a 120 ° arrangement. This arrangement also ensures evenly spaced ignition intervals, thus providing a very smooth engine.. 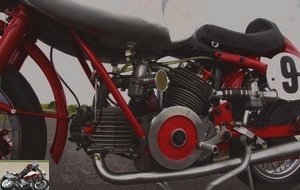 The V-Twin Guzzi stands out with its incredible 120 ° angle

American auto designers have used the same format on their V8s for decades. And when Honda later rediscovered the idea by using it on their V-Twin motorcycles, it was inevitably hailed as a big step forward. The only problem is that Guzzi had already done it half a century before on the Bicilindrica !

At 1,390mm, the wheelbase of the 500 V-Twin is only 30mm longer than the mono 250, just to save some room for the second cylinder. This arrangement, however, pushes the rear of the two Dell’Orto 28.5mm carburettors to be positioned well behind the rider’s left leg, level with the rear wheel. This was the cause of problems with dirt entering the carburetors and the motorcycles would eventually run with a metal cover on the intake horn from the rear. The valve sizes are identical to that of the 250 with 37mm intake and 34mm exhaust fitted with exposed hairpin springs and controlled by Z rocker arms. Typical Guzzi "square" dimensions of 68 x 68 mm have a total capacity of 494 cm3 and remain identical to those of the 250, but with a smaller flywheel. The four-speed gearbox is foot operated by a selector. 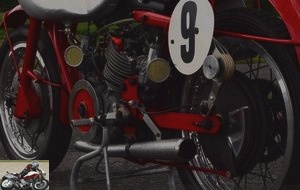 The positioning of the carburetors was a source of problems for the pilots.

While according to official Guzzi figures the 250 produced 22 hp at 7,500 rpm for 132 kg, the new Bicilindrica produced 41 hp at 7,000 rpm, then even 43 hp in 1934 when the dry weight was reduced from 160 to 151 kg by opting for magnesium housings. The machine then won almost every season, including after the war, and continued to run for the factory team until 1951! The history and developments of the Moto Guzzi 500 Bicilindrica are also widely discussed in the dedicated file.. 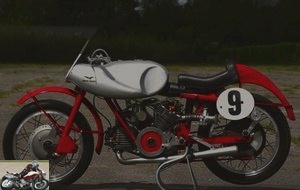 The current copy of the Bicilindrica reaches 52 hp

Although a dozen of these bikes have been built over the years for the factory team, there was no customer version. 120 ° V-twin Moto Guzzis are rare these days and it had been a long time since we had seen them on the track, until recently. The post-war 1947 version of the Mandello del Lario museum unfortunately never runs, making the various appearances at the Goodwood Festival of Speed ​​of Sammy Miller’s two acquisitions all the more exciting for the Guzzists.. 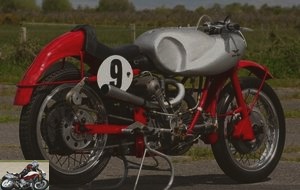 If a dozen motorcycles were built, examples are very rare today.

10 years ago, Sammy, owner of the Sammy Miller Museum, discovered two copies of the Moto Guzzi 500 GP that had spent the last decades in a private Italian collection: a V8 500 from the mid-1950s and the 500 Bicilindrica which preceded.

Each of the motorcycles was assembled many years ago from a mixture of replicas and original components from the Guzzi factory, after their withdrawal from the race at the end of 1957. The instruction was given to destroy all copies except one which would remain in the factory museum. Since this is Italy, the motorcycles were ultimately not destroyed, but simply boned and the parts ended up in different places, before coming back together to create various motorcycles, each with a high proportion of spare parts. origin. We were able to purchase these two for the Sammy Miller Museum and they are ready to ride like almost all of our motorcycles, so they can be heard and seen in action.. 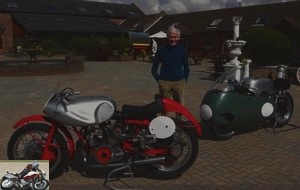 Miller found a Bicilindrica and a V8, exhibited in his museum, but also released on the track

I have been riding 90 ° V-twin Ducatis for over 40 years. But even that didn’t prepare me for the incredibly smooth and refined feel of the wide-angle Guzzi motor, which starts very easily. Its exhaust note, emitted by the inverted double cone megaphones, has a melancholy rhythm that makes you subconsciously expect an engine other than perfectly balanced. But the Guzzi power supply is ultra-smooth and vibration-free. What a wonderful road bike engine this 120 ° V-Twin would have done, if only Moto Guzzi management had achieved what they had in their hands. Because it was Carlo Guzzi who actually invented the wide-angle V-twin mounted in the length of the frame and not Ducati engineer Fabio Taglioni 40 years later. Is this the biggest missed opportunity of the Italian brand ? 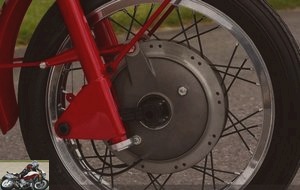 Sammy Miller’s only modification from the original Guzzi V-Twin was to install 28mm Bing CV carburetors to replace the 35mm Dell’Ortos that came originally with this bike. And since nothing is ever thrown away, they wait on a shelf to be reinstalled, if one day he decides to stop rolling the Bicilindrica..

The 250 Guzzi had 30mm carburetors, but when they doubled it down to produce this 500, they fitted it with 35mm units. This means that the design of the cylinder head is really too high in carbohydrates and it is almost impossible to get the right levels and balance them properly. Since we consider it very important that people can see and hear our motorcycles in action, we have installed the CV carburetors to make this possible, without the engine coughing and misfiring.. 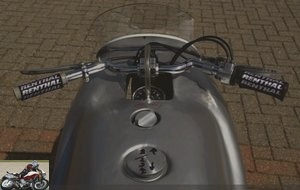 Place for the trial of a living legend

I can now appreciate how user-friendly the engine really is, although to get decent power you have to run it at 5,000 rpm or less, with a peak power of 52 horsepower on this ultimate engine evolution reaching 8,000. turns. With the megaphone exhausts it stutters a bit around 3,000 rpm, but pulls properly from 4,000 rpm to the top, although it can be adjusted quite quickly using the lever on the clutch in oil bath with light action. 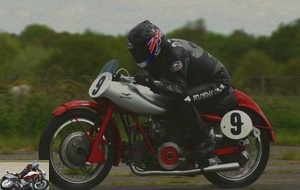 Guzzi has visibly reduced the power range in an effort to keep the bike competitive into old age. And with a difference of 2,300 rpm between second and third gear on the 4-speed gearbox, you have to run it at nearly 8,000 rpm to avoid misfires when you move up to a higher gear. However, there are only 700 revs between third and fourth gear, making it a typical Monza-type gearbox for fast circuits such as those found at the time.. 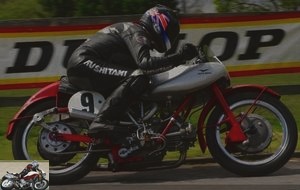 So you end up using the middle two gears most of the time on tighter tracks. 1st gear is too low except for hairpin bends approached at a walking pace or to exit the pits. It is only above 5,000 rpm that the engine pulls cleanly and runs perfectly on both cylinders.. 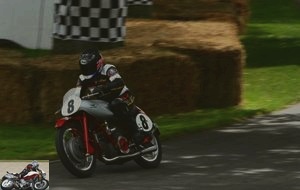 We mainly drive on 2nd and 3rd gears

Another quirk comes from the use of the front brake, which actually consists of two 220mm single cam drums mounted back to back. So instead of a junction box, the task of equalizing the pressure on both sides is left to the rider, who doesn’t have just one brake lever to tighten like on any other motorcycle, but well two separate! Presumably the idea was that in the rain or on a soft surface, as was the case back then, you only use one to avoid any risk of blocking the road before.. 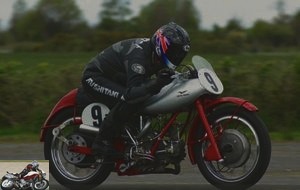 The Guzzi’s front brakes aren’t as good as I expected. But that makes sense given the rather harsh nature of the two Avon Speedmaster tires and after the bike has spent the last two decades unused in a private museum! On the other hand, the single cam rear drum works great which is a big plus as I didn’t want to inadvertently squeal the motor when braking too hard.. 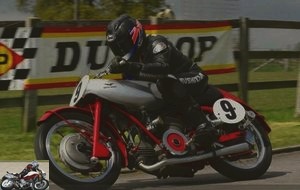 Much smoother and less tiring to drive than a vibrating mono or a parallel twin, Moto Guzzi’s 120 ° V-Twin deserved to become the Methuselah of motorcycle racing. Its quirky exhaust note and smooth, smooth engine are literally unique. They not only make it a distinctive motorcycle that spectators can see and above all hear in action, but also an excellent tireless machine for the two-hour Grand Prix races of its time, or for traveling through Italy in one go in action. swallowing 1,300 km in a single day to win the Milano-Taranto so many times. 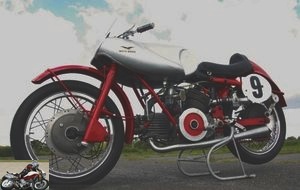 Eventually, the Guzzi Bicilindrica was overtaken by four-cylinder rival Gilera and his counterpart MV Agusta. And that is why Moto Guzzi produced its V8 500 on time. But that is another story and that will be the subject of a future article. !