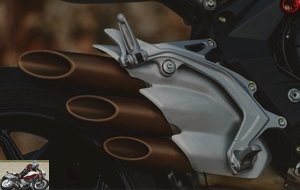 Real progress, where it is needed on a daily basis, since the new version outperforms or equalizes the old from 3 to almost 10,000 rpm. In short, the 9 missing horses will only feel on the draw. For MV, the idea is to make riding both easier and more accessible to everyone. Let’s see if she keeps her promises.

Let us ask ourselves. Ouch! It’s beautiful, but it’s firm. The saddle is certainly beautiful, but it is not the most padded. Fortunately, its ergonomic shape leaves enough contact surface to partially compensate for its hardness. But if you have long-trip ambitions, consider putting on a “cyclist” to protect your seat. On the inside of the thighs and depending on its size, you can feel the ridges of the reservoir a little. The older ones seem the least awkward, but also the least mobile, given the space available. Over the kilometers, we forget this little nuisance. The footrests fall well under the feet. On the right side, if you want to go back a little, you have to move your heel aside, the presence of the exhaust requires. Despite a rise of 20 mm compared to the 2015 model, even the little ones easily put their feet on the ground. 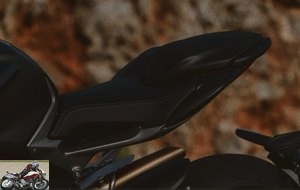 The wide, curved handlebars require outward pressure from the hands, away from the thumbs. It gave me ants. We will have to see in the long run and possibly by rotating it a bit if we get better. The riding position is very focused on the front, almost supermoto style. But apart from this support in the long run, the ergonomics are good. Finally, let’s take a look at the dashboard. It’s both small and sturdy, packed with information that is hard to read due to lack of space. If you are over 40 and have some presbyopia, you will need a magnifying glass to read the time. Likewise, the rev counter, the scale of which rises to 16,500 rpm, is not ideal with an engine which breaks at 11,500. With a suitable scale, it would have been more readable, but here, standardization requires, we hardly sees it. The various electronic modes and settings are displayed there, but we regret the absence of a gauge, for example. Finally, the turn signal reminder is hardly visible, especially with a tinted visor. And since we have a Boeing dashboard in front of us, we take off ? 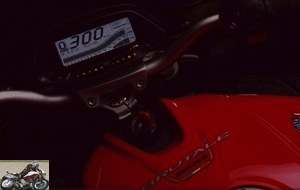 The new dashboard is certainly very complete and multifunctional, but it is difficult to read. Try to read the time while driving! Theoretically accessible with the right thumb (practically it’s a bit far), the "engine map" button allows you to change maps while driving.

Despite the noise reduction, the sound is still virile and sympathetic. In fact, it is mainly the mechanical noises that have decreased and we will not complain about it. It “annoys” less. The noises of the chain and other sprockets are more discreet and the “tre pistoni” always strafe nicely. Nothing to report on the box side, but on the clutch side, progress is significant compared to the Turismo Veloce. Here too the unpleasant noise and vibrations detected during the presentation disappeared at low speed. The hydraulic control is nice. Very pleasant, also the flexible engine which adapts well to idling in the first gears. He is cultivated and well behaved this three legs. Thin and low, the bike slips easily. The controls are soft, it is light, the mirrors do the job well…. So without fail? No, that would be forgetting a significant turning radius. But we would take it well to go to work every day anyway ! 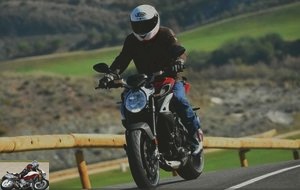 The small whirling roads are pointing their noses and we will be able to gauge a little more the work done, both on the engine and on the chassis. The evolution of the three-cylinder is in part based on the work done for the Turismo Veloce. However, the two engines are not identical, since on the Roadster conforms to Euro IV and develops 116 hp, while "cross over" is Euro III and is content with 110 hp. In both cases, the goal was to shift the range of use down, to make the engine more enjoyable and more usable. Less greedy too. On the chassis side, the modifications relate to the geometry. More open column angle (from 23.8 to 24.4 °), the caster goes from 99.5 to 103.5 and the wheelbase is lengthened by 20 mm to reach 1400. The objective is to make the bike more civilized, more predictable, less brutal in short. To compensate for this gain in stability, MV increases the seat height, which raises the rider’s center of gravity and thus increases load transfers, and therefore changes in attitude when braking. The bike thus regains lost handling. And on the small road, this work pays off, at all levels. No worries, as for the engine, it’s still there and if it loses a bit of draw, it’s in an area where you only go to make it howl. In tricky conditions at first, on a road that is sometimes dry and sometimes wet, the turns are wound in the same gear. The elasticity is such that it can be done in third, as well as in sixth. It’s round and full everywhere. A real treat this mechanism. And then 116 hp, it’s already very fast on the road! Add to that a shifter that works wonderfully uphill and downhill and you enjoy changing gears without ever cutting the throttle or disengaging. In terms of behavior, the chassis is like the engine, exemplary, easy, predictable. It’s not a Honda, which would be a shame for an MV, but it takes less commitment than the old version. It moves and it heckles less and without being able to compare, it’s a safe bet that it goes faster. We will talk about braking and suspensions later.. 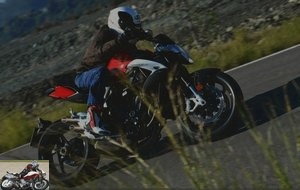 When the straights lengthen and the corners widen, the 2016 Brutale loses none of its luster. Thanks to the modifications made to the geometry, the stability is flawless and the rigidity never compromised. In fact, you fight less on the bike and it’s a lot more relaxing. It allows you to have more fun and focus on driving. As for the engine, it has enough wind to guarantee sensations worthy of a mid-size roadster, if not more. The electronics are both discreet and omnipresent. The pilot is free to configure everything while riding, as long as he slows down the pace in order to read the dashboard, which is not easy in a group. Three maps are available: rain, normal and sport, plus a fourth called "custom", configurable at will. The anti-slip is adjustable in 8 levels. When set to 4, it is hardly intrusive. A nice slide out of the roundabout will confirm this. A colleague blocked out of 8, found it too present in sporty driving, we can therefore bet on good efficiency thanks to the intermediate positions. It is also possible to modulate the character of the motorcycle, by modifying the response of the engine, the linearity of the throttle, etc…. there is something to have fun and especially to make a motorcycle à la carte, with fairly intuitive menus. 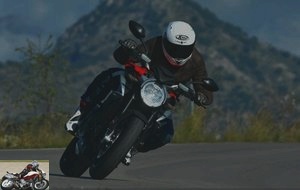 A brief foray on a four-way allows us to make a few remarks. The vibrations are contained and perfectly bearable. Thanks to the increased torque at low revs, the manufacturer was able to lengthen the gear ratio, which the mechanics can easily withstand. Thus at 130 the engine speed has dropped from 7100 to 6400 rpm compared to the previous version. An evolution which, together with the work carried out on the engine, allows MV to claim a 20% reduction in consumption. It’s no small feat, and it’s as good for the autonomy as it is for the wallet and the planet. Protection is not a buying criterion on a roadster, however, the headlight and dashboard seem to effectively deflect the air and on small spikes you don’t immediately have your head blown off. 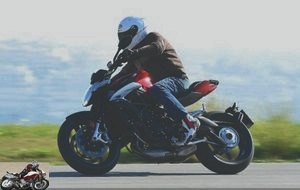 The double front disc and its large radial calipers provide excellent service. It is powerful, dosable and the ABS (disconnectable) is very discreet. Nothing to say except praise. Behind it is more mixed, but maybe the pads were lacking in break-in? The deceleration power is almost zero if you only use it and you hardly feel what is going on in the pedal. However, it can be used in a turn, to stabilize the bike, or to close the line in a curve that is closing. So in practice it’s not too bad, but could do better. 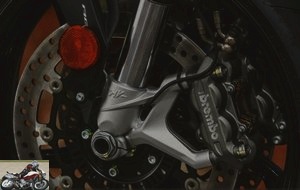 We have already told you about the firm saddle, but the suspensions are also firm on small shocks. Our course was more of the billiards type, so difficult to get an idea, but, on rough strips and other speed bumps, it hits the nail on the head. However, the suspensions work and are adjustable in compression as in rebound. It is really on small shocks at high speed that it is noticeable.

Here not much to add. We buy an MV, not a scooter! Special mention for the work done around the passenger, with footrests that have joined those of the pilot thanks to longer plates. It’s probably better for the legs and visually clears the rear, which is also free of its indicators now attached to the license plate holder (these Italians are strong in design!). Best of all, the support bar can be moved back 40mm, allowing the passenger to slide their fingers. It’s refined! Under the passenger seat, no room, but just an Allen key to remove the pilot’s seat and slip your regulatory yellow vest under it. Weren’t you going to put it in the open space of the back loop anyway ?! Finally, let’s talk little, but let’s talk about money. At € 12,590, the MV is more expensive than a Japanese 1000 roadster, or a Monster 821, halfway between Speed ​​Triple S (base) and an R. MV plays the “upper premium” card and the choice is assumed. Finishing, fittings, electronic management, here everything is at the top. There is no option, even the UP & Down shifter is standard. Apart from opting for a Dragster, the model above, the brutal is "all inclusive", all inclusive as the English say. The fact remains that by selling 9,000 motorcycles in 2015, the brand cannot claim economies of scale, as among the Japanese, or even other major Europeans. Riding on a MV therefore remains a rare pleasure and it has to be paid for. Last detail. The motorcycle is available in concession. Go see her, you won’t be disappointed. 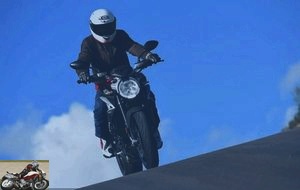 So this Brutale, has she lost her soul by losing a few horses and a few decibels? No, frankly no. She has undoubtedly lost character, but above all bad temper. On his handlebars, we take more pleasure, we tire less and we advance more. The extra torque will delight even wheelie enthusiasts, it’s easy to see. And since we are talking about the eye, admit that its plastic and its finish are more attractive than ever. So if you have the budget, you won’t regret your investment. The Brutale has certainly reached maturity, but not yet the age of reason. He still has a grain of madness and his potential for seduction is perfectly intact. At MV, the 2016 vintage is undoubtedly a great year !

The technical sheet of the MV Agusta Brutale 800