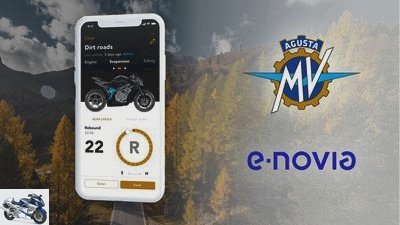 MV Agusta and E-Novia develop together

MV Agusta expands reality
Adjust the motorcycle via the app

MV Agusta expands our reality. At least that’s what MV and the new partner E-Novia want. Augmented Reality is probably better known as Augmented Reality and supports our senses with additional digital information.

On the subject of connectivity, useful apps or future-oriented technologies MV Agusta historically conditioned the relationship status: Complicated. And without bashing the Castiglioni clan too much, this relationship seems to be a little more harmonious under the new owner and boss Timur Sardarov. In addition to a bunch of new models and something like constancy, the company is now also using the Italian specialist E-Novia to network man and machine, initially via mobile phone. 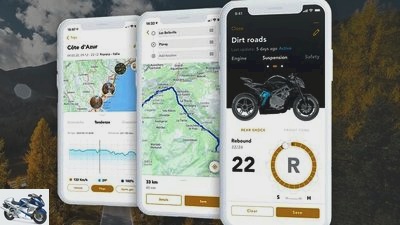 Unfortunately the message from MV Agusta on the subject rather transparent in terms of content, but the two published graphics already show one or the other delicacy and indicate the direction in which the new partners want to go. In addition to navigation, one of the displays also shows a possible deep intervention in the settings of the motorcycle: engine, suspension and safety are displayed and an electronically adjustable chassis seems to be pre-configurable via app and activated at the touch of a finger or even voice control.

If you take this approach further, MV Agusta could then use an app to carry out the options shown using such a system and correspondingly good map material. A suitably equipped MV could adapt to them even before reaching bad roads, soften the chassis, sharpen the ABS somewhat and reduce the engine power. And for racetrack fans, such a system would also offer considerable potential. Brave new world – maybe.

It may sound like a spinning mill, but the path that MV Agusta is taking together with E-Novia is extremely interesting. Let’s just hope that under Sardarov, MV can take enough breath to implement ambitious projects.