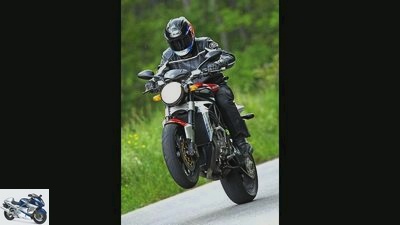 Now she was allowed to show the PS international Alan Cathcart what she can do besides looking cool. More power was needed, for which the F4 312 engine was drilled out.

The stroke remained the same, as did the cylinder heads. Instead of the 48 mm throttle valve of the 312, the fuel-air mixture falls through 46 mm valves from the F4 1000. Result: the brutal wheezes from the first traffic light. Not that it cannot be prevented, but one can get drunk with the strength. 18 hp more than its predecessor 910S? oh yeah! Can be called up linearly up to the limiter at 11,650 / min. Well, at 7000 rpm there is more cream as a second helping, but without any element of surprise. With the necessary prudence on the throttle, it is very manageable, and once really let go, the Italian pumps speed noise into the driver’s veins.

Downstairs, it has enough flavor to casually cruise around town and delight the audience with MV live sound. This 150 PS brutal is agile with a good chassis and yet stable on the brakes and on uneven roads. The hook? 18,450 euros, but even if you have the money, you lose because they MV Agusta is currently not available.

An interview with MV President Castiglioni awaits you on the next page. 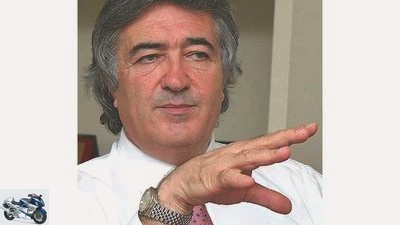 Renowned Italian newspapers are talking about the takeover, there was nothing left of the BMW money for Husqvarna for MV, and dealers are complaining about delivery problems. PS employee Cathcart asked MV President Castiglioni about the brand’s situation.

? You hear and read a lot about the situation at MV. Is there a future?
! Definitely: yes. There are people who ?? out of whichever reasons ?? want to discredit the brand. The Brutale 1078RR won the ?? Moto dell ?? Anno 2008 ?? and is a demonstration of the strength of our products. We sold Husqvarna to BMW to reduce our debt and develop the most glorious brand in the world.

? Fine, but if the flow of money is so obviously weak that you can’t get the products to the customer because you can’t pay the suppliers, it won’t work.
! You are right, but I ask all those who want good to MV Agusta to be patient and trust that our ongoing negotiations with potential new partners will be successful. I am fully convinced of that. As agreed, we received money in order to be able to pay important suppliers. The production capacity is back at 100 percent.

? After the Husqvarna sale, it was assumed that some of the money would be invested in MV. Instead, it looks worse than before, and less money is coming in because you’re not selling any of the previously profitable off-road bikes.
! Unfortunately, those who were responsible for the financial aspect of signing the deal with BMW have directed all the money to the bank, with which we have a normal loan deal to keep our day-to-day business going. It will run until 2014. Instead of providing MV as a company with capital again, as I had assumed, in order to increase production and advance development, nothing came here. In order to solve this problem, we are currently talking to external partners. With reduced debt and great new products in the pipeline, we’re an attractive investment. So when I hear that I am sleeping at the wheel and letting MV drift into bankruptcy, I assure you that I am particularly active here and that I will be successful so that MV is not only potent again, but also brings a lot of new products in new segments will.

? Which investors are they? You can hear Harley-Davidson, Tata from India and other motorcycle manufacturers?
! Tata has been talking to suppliers and that’s how the rumor spread ?? there is nothing to it. But we are in contact with other Indian investors. With other motorcycle manufacturers? Not at all. I wouldn’t rule out a possible connection with Harley, but there is currently no contact. But don’t worry, the partner you want will come and MV will continue to exist. I don’t want anyone to come in and write checks. We have to restructure MV and just do it differently in the future.