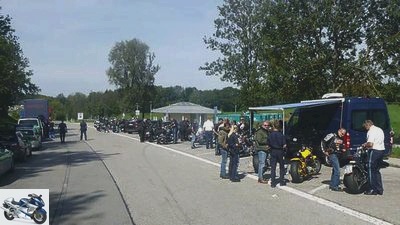 During the week around the European Bike Week at Lake Faak in Austria, the police in southern Bavaria checked motorcyclists arriving and their bikes.

The complaint rate was around 55 percent.

From September 4th to 9th 2018 the Harley-Davidson European Bike Week took place again in Faak am See in Austria. With up to 120,000 participants, the motorcycle meeting in Carinthia is one of the largest of its kind.

In connection with the motorcycle meeting, the Bavarian police checked motorcycles along the main traffic arteries through Bavaria. The officers checked a total of 465 motorcycles, of which 257 were objected to. This corresponds to a complaint rate of 55 percent.

In addition, 32 criminal proceedings were initiated for suspected misuse of license plates and one criminal proceedings for driving without a license. 142 motorcyclists are being investigated for an administrative offense, mainly for illegal or manipulated exhaust systems. 93 motorcyclists were fined. In the case of 148 motorcycles, further travel had to be prevented or only permitted under certain conditions.

Many motorcycles were too loud

According to the police report, most of the motorcycles complained about were noticeable because of their excessive noise development. By installing illegal exhaust systems or manipulating approved exhaust systems, the maximum permissible noise levels of your vehicles have often been exceeded by far. This year’s high value was a young Pole whose motorcycle including illegal exhaust produced a standing noise of 119.7 dB (A) instead of the permitted 92 dB (A). Incidentally, the driver of the vehicle wore earplugs and said that his machine was still unbearably loud. In medical terms, the value 120 dB (A) is referred to as the pain threshold.