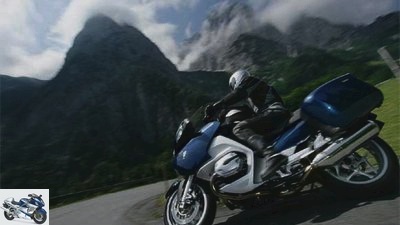 The northern edge of the Alps offers more than just a foretaste of the “real” Alpine passes. Three tour tips around Berchtesgaden show that the German and nearby Austrian Alps can easily compete with their higher neighbors in the south. A bypass of the Steinernes Meer reveals jagged mountain scenery in the format of the Dolomites. And a winding tour around the lakes of the Salzkammergut combines peaks and waters in the most beautiful way. Even the journey to the first tour can be arranged from Munich. 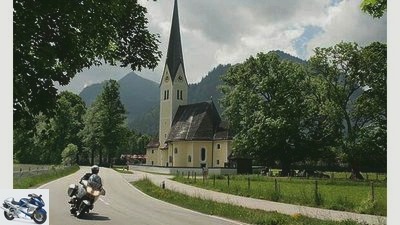 The first tough tour begins in Holzkirchen and ends in Berchtesgaden.

Munich, the gateway to the Alps, is already in the rear-view mirror. And the A 8, the “Salzburg Autobahn”, which goes back to the construction of the autobahn by the National Socialists, is once again closed. Often only two lanes and no hard shoulder, it seems to have become much too narrow for the heavy truck traffic in the direction of Austria. But you can escape this at the Holzkirchen exit. Even if the B 318, which leads almost as an arrow straight towards Tegernsee, does not yet have the high consecration of a meandering alpine road, it is always good for getting in the mood and looking forward to it. In Gmund am Tegernsee you almost get in touch with the mountains, as pithy as they grow up behind the shores of the lake. At the sailing school, turn left to Schliersee, the Tegernsee’s little brother. Both bodies of water are the remains of huge glaciers that carved out their basins there during the Ice Age. And who were also involved in the sharp points around the banks. 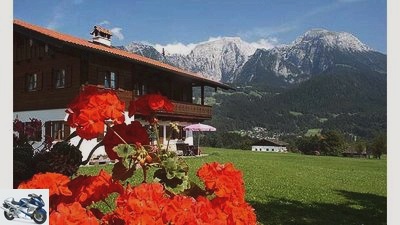 Welcome to the magnificent Alpine foothills.

But the mountain peaks are still green, the rocky backdrops as well as the curves of real alpine roads have yet to come. But then: After the Schliersee, the white collar of the Wendelstein suddenly appears on the B 307. Bare rock in the upper part of the 1838 meter high Grande. You can see how the layers wedged up vertically when the Alps were pushed together. The wild madness! The right Alps have been reached. And behind Bayrischzell, the tar ribbon also takes on alpine features, curves in veritable switchbacks up to the Sudelfeldsattel and on the other side plunges back down into the valley with enthusiasm. In such a curve mood it is better not to take the toll road directly to Brannenburg at the junction, but rather the detour over the Tatzelwurm to Oberaudorf, deep down in the wide Inn Valley. After the wonderfully curvy worm appendage, you first go north along the Inn to Nussdorf (actually the wrong direction and again a bit out of the Alps), but then over the Samerberg on beautiful winding roads to Frasdorf. 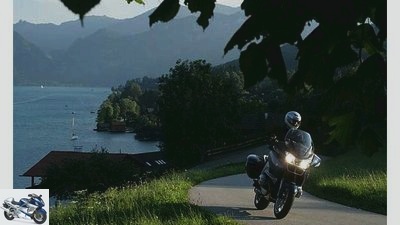 The most picturesque view of the Salzkammergut: turquoise water and jagged mountains interlock at Lake Attersee.

From the base hotel, Austria is only 500 meters away, where you rush steeply down into the Salzach Valley to Hallein. A short detour to nearby Salzburg would be nice, but today’s loop is long. In Hallein, first follow the – bad – signs towards the center, then at the roundabout towards Golling, then stop to St. Gilgen / Adnet / Wiestal. Two kilometers behind Adnet, turn right up to Krispl and enjoy the wide view back to the mountains of the Berchtesgadener Land. After the village turn back down into the valley and follow the signs to St. Gilgen. Behind the Wiestal reservoir there is a little extra lap: follow the junction to the right to Faistenau and continue towards Hintersee. On a tiny road that squeezes tightly against the rock and is wonderfully winding to the Hintersee. Nothing to drive fast, but to discover a hidden corner of Austria.

At the lake, keep left again to the north and cruise straight on via Faistenau / Anger to 158. There right via Fuschl to St. Gilgen and at the roundabout take the 154 to Mondsee. At the lake in Scharfling right through the tunnel to Unterach am Attersee. Roll quietly around the southern end of the lake to Steinbach on the 152. There it gets afloat again: The 153 leads with well-developed curves over a mountain saddle (view of the rock of the Feuerkogel, short stop at the small lake at the source of the Aurach). After eight kilometers and shortly before reaching the Traunsee, take the detour to the lake via Mittendorf. (Otherwise a little detour via Altmunster with its old-timer museum.) Due to the many tunnels, there is not much to see on the drive south along the Traunsee, so the worthwhile stop in Traunkirchen at the Johanneskirche. In Ebensee, follow the soulless 145 expressway to Bad Ischl (recommended break in the famous spa town of the Austro-Hungarian era). Keep on the 158 in the direction of St. Gilgen. 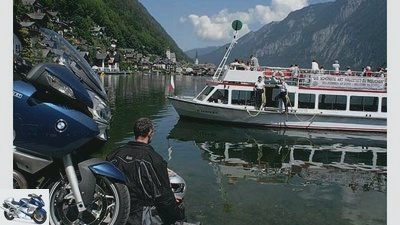 Two kilometers after the tunnel, in the district of Haiden / Kreutern, turn right from the main road to St. Wolfgang via Rubbach, to reach St. Wolfgang on the lake of the same name on a narrow tarred strip (break tip Weibes Robl). Return four kilometers along the bank to turn right to Strobl in Burgl. After so much water, it’s time for the mountains again: In Strobl you cross under the 158 to drive south-facing and with lots of fun on the bends up towards Postalm. The toll part (three euros for the motorcycle) begins three kilometers behind Strobl. The tiny lane leads with a lot of inclines into the southern neighboring valley to the Lammer river, where you come across a T-junction with no signs. There drive left towards the clearly visible Dachstein with glacier. You finally come to the 166, on which you reach Lake Hallstatt on the left over the 17 percent pass Gschutt and Gosau. Turn right there into Hallstatt, which is absolutely worth seeing (break tip). A very scenic route leads around the southern end of the lake to Obertraun and on a 23 percent steep course over to Bad Aussee (detour to Grundl and Toblitzsee or to Altausseer See possible).

Tour 3: Around the Stone Sea 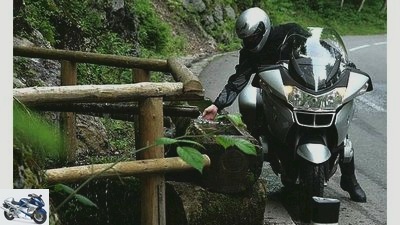 Unplanned detour to the stony mountain roads to the right and left of the route.

This tour also goes from the hotel via Bad Durnberg deep down to Hallein in the Salzach Valley, which you follow on the 159 south in the direction of Golling. The mountains grow massively upwards, and from Golling onwards, the motorway accompanying you up in the rock changes more and more often from bridges to tunnels. It fights with river, train and country road for the increasingly narrowing valley of the Salzach, which this has cut out between the Hagen and Tennen Mountains.

The 2281 meter high Hochkogel seems within reach, and Hohenwerfen Castle, like a fantasy castle, adds an accent to the jagged backdrop. If the road was fast and well developed up to now, the right curve mood comes back to Bischofshofen on the way to Muhlbach. The landscape remains spectacular if you follow the Arthurhaus / Mandlwandstrabe junction in the village, which leads to the rocky Hochkonig. At the 1,500 meter high terminus directly at the foot of the Hochkonig, the peaks were almost twice as high in front of the viewer (see “Tip for a break”). Back in Muhlbach, we now continue on a brisk, winding mountain road in a westerly direction to the 20 percent steep eastern ramp of the Dientner saddle . 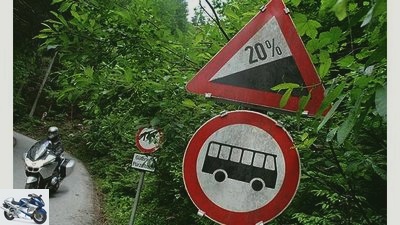 High-percentage routes await the traveler on the tour through the stony sea.

On a six-kilometer fast route, you gain a full 500 meters in altitude, and then turn left towards Wend and Dienten-Zentrum in the west on a somewhat flatter course in the village of Dienten am Hochkonig. The narrow road to 311 meanders along the Dientner Bach, on which one continues to the right in the Salzach Valley in the direction of Taxenbach / Zell am See. In Taxenbach it is possible to take a detour to the scenic Sack Valley of Rauris. Otherwise, continue on the 311 to Bruck and occasionally enjoy the fabulous view of the giant mountains of the Glockner massif and the white snow cap of the 3,203 meter high Kitzsteinhorn. Detour to Kaprun to Votter’s vehicle museum possible (see “Worth seeing”).

In Bruck turn right onto Ostuferstrabe along the Zeller See (the quieter option) or stay on the 311 and via Zell am See (break tip in town) north to Saalfelden. Fast but spectacular it is now on the 311 via Weibbach to Lofer and along the imposing cliffs of the Steinernes Meer. In Lofer you could shorten the mountain tour and follow the signs to Bad Reichenhall to reach the Deutsche Alpenstrasse via the knee and stone passes. Otherwise, in Lofer, turn left to Waidring and then left at the junction to St. Ulrich / Pillersee. Via St. Jakob you can take the idyllic little road 164, which you follow to the right to St. Johann.

Via Kirchdorf, Griesenau and Schwendt on a great mountain route through the eastern flank of the Kaiser Mountains on the small 176 to Kossen. An absolutely recommendable detour leads from Griesenau left into the Kaiserbachtal on a small toll road (0.70 euros / motorcycle) up to the Griesener Alm (break tip). Here you sit right at the foot of the vertical rock faces of the Wilder Kaiser. When continuing to Kossen, before reaching the town, turn right on the 172 over the German border to Reit im Winkl. The B 305 lives up to its name as the German Alpine Road and leads with its Canada ambience through an entire lake landscape to Ruhpolding. From there it goes back to Berchtesgaden past the boulders of Reiter Alpe and Hochkalter.