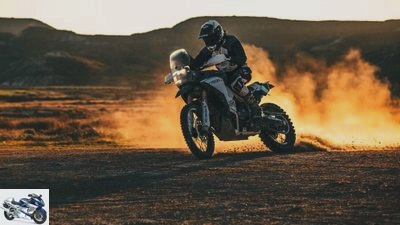 Triumph enters the sport of enduro and motocross

Triumph is entering a new market segment: the development of a completely new range for motocross and enduro racing is in full swing. Motorcross legend Ricky Carmichael and Enduro World Champion Iván Cervantes are on board.

Triumph wants to enter the hitherto completely alien sports segment of enduro and motocross sports no less than at the top level. To this end, Ricky Carmichael and Iván Cervantes, two top people, were hired. However, the two off-road legends still need mobile pedestals. And that announces Triumph as under development and soon to be announced. Overall, Triumph remains at most non-binding, but would like to announce via CEO Nick Bloor that it is closed “(…) 100 percent determined to leave a lasting impression in this challenging and demanding competitive environment. Our goal is to bring a successful range of motorcycles to a new generation of Triumph riders.” So far, so uninformative. But thank you very much for that, because that leaves a lot of leeway for speculation.

Triumph to the Dakar?

Already in 2017 Triumph flirted with the Tramontana based on the Tiger 800 XCX with the later 900 engine. With this machine the PanAfrica-Rally could be finished successfully in 2nd place. With top people like Cervantes and Carmichael, the step to the Dakar would be feasible in terms of driving without stumbling. Whether that makes sense with a triple, however, has to be provided with a question mark.

Whether it’s Dakar, motorcross or rock-hard enduro. Triumph currently lacks a technical basis for this: single-cylinder with a wide variety of displacements and – even more important – cycle rates. The comprehensive KTM portfolio can be seen here as a poster. The official partnership with the Indian giant Bajaj focuses on smaller displacements and engines, but if there was a racing engine and a matching chassis, it would not have remained a secret for so long. 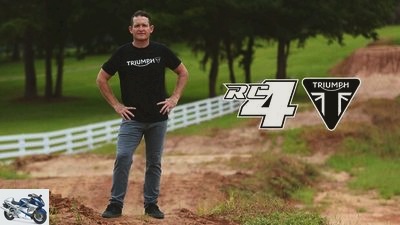 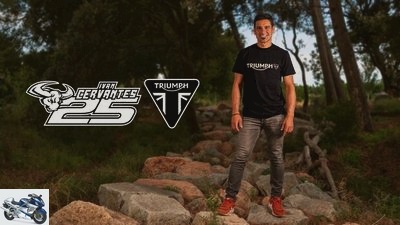 The racing career of 5-time world champion Iván Cervantes began in motocross, where the Spaniard won 5 national titles before moving to enduro racing in 2002. At the age of 23 he was the first Spanish world champion in the EnduroGP E1 category. This was followed by 3 more World Championship titles in the EnduroGP and one FIM Indoor Enduro World Cup title.

And as off-road oracle Peter Mayer from MOTORRAD correctly recognizes: “If the Carmichael showed up somewhere and something was driving that nobody knew, then everyone would see it and would no longer be a secret.” In other words: The previous lack of any rumors about a completely new model series from Triumph in the motocross or enduro area can mean two things. First: Triumph kept much closer to secrecy than ever. Or: Something is coming that nobody would expect. Both exciting.

Triumph announces that it intends to attack the enduro and motocross sports segment in 2022. In addition, there will be completely new machines and with two off-road legends like Carmichael and Cervantes Triumph builds a steep jump ramp. Whether it’s too steep or not, one thing has to be triumphed: The urge for new markets is noticeable and, despite the high costs, is vital for a small manufacturer. And a segment like Enduro and Motocross is an interesting one because, with a view to KTM, it might even be profitable.