In a particularly active national market in terms of trail, the German tire manufacturer Continental has developed a new tire to equip the powerful KTM 1200 Adventure as well as the new 1200 GS, with the aim of rising to the level of very tough competition.. Discovery on the Austrian-German roads… 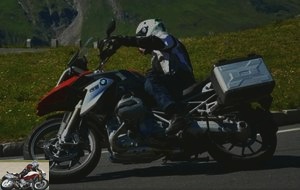 Each manufacturer has their own philosophy. At Continental, we like to think of the big trail user as an epicurean who opens his shutters on Sunday mornings and hops on his bike for a long ride, provided the weather is nice. In case of bad weather, he goes back under his duvet, watches a football match, or the GP on TV, but in any case, the motorcycle stays in the garage. From this behavioral vision of the rider arises technical compromises in the design of the tire. Thus, the driving pleasure is it particularly worked, since, in this category at least, the motorcycle is initially regarded as a pleasure. Handling and grip on dry surfaces are at the heart of engineers’ concerns, even if this is to the detriment of handling on wet roads, since the initial assumption is that the bike remains on the stand. In short, by virtue of these main principles, the firm had accumulated a certain technological delay on wet roads. However, in the face of joint pressure from the competition, manufacturers and customers, Continental has decided to make an effort in this area, without denying the basic DNA of its production..

Technology at the service of performance

A unique eraser but different areas of hardness 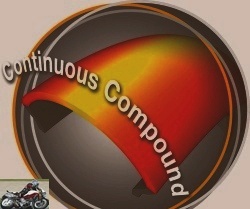 To keep up with the incredible evolution of modern big trails, the tire configuration had to be adapted to the performance and weight of the motorcycles. Gone are the days of the 32-horsepower 500 XT that went on a jaunt in sunken lanes. Today, KTM cranked up their RC8’s engine in the Adventure, creating a 150 horsepower monster that riders and tires will have the heavy load to tame. In this context, you have to have guts and cold blood. To reconcile the irreconcilable, Continental did not adopt twin-compound technology, but worked on baking the tire in a new mold offering different temperature gradients according to the zones. The vulcanization of rubber and its properties are thus modified. In fact, with a single rubber, different hardnesses are obtained all the same, depending on the area of ​​the tire in question. A technology called Continuous Compound, which gives a "multigum" effect, perfectly progressive and without transition zone. In addition, the new mixture claims better grip, in the dry as in the wet, with a very short heat-up time.. 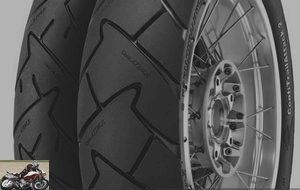 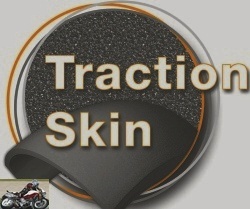 Another peculiarity, the 0 ° rear belt which makes it possible to reconcile handling, a traditional strong point at Conti, and stability at high speed. The Trail Attack II is approved up to 250 km / h !

Little more, thanks to an internal coating of the special mold, baptized " Traction Skin Continental renounces the use of a mold release agent which makes the tire very slippery for the first few kilometers, causing serious risk of falls when the tire is broken in. The Trail attack II is therefore more quickly broken in and less dangerous at the start..

Just as in real life !

After briefly introducing us to their new baby, the members of the Continental team invited us to test it out under real-world conditions, in the form of a long drive between Munich and the Austrian Alps. Two days of driving, under a bright sun and on almost always impeccable asphalt, as we know how to do there. All in breathtaking alpine landscapes.
Our test machines were “liquid” BMW 1200 GS and Triumph Tiger 1200 Explorer. Big critters, stuffed with testosterone and torque. Modern trails, equipped with electronic assistance with which manufacturers must now deal: ABS, traction control, piloted suspensions, etc. In this area, Continental is no exception, since the firm develops precisely this type of equipment for motorcycle manufacturers. The company also intends to develop with the argument of a "complete" offer allowing a reduction in the number of suppliers, much appreciated by large companies … .. But back to our motorcycles ! 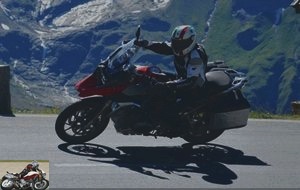 From the first few meters, we appreciate the maneuverability of these mastodons! it swings, it swings, it enters a curve on the brakes without straightening up. A mixture of qualities specific to machines and tires which is perfectly suited to this type of machine. At high speeds, stability remains imperative, whether at 180 km / h in big curves, or at 200 in a straight line (we did not have the opportunity to test beyond ….).

Scheduled as original equipment, together with the Michelin Anakee III, the Trail Attack II fits like a glove to the liquid 1200 GS. This is also the case with the Triumph, which is very successful, but intrinsically more clumsy than the Munich one…. who was playing at home for once. However, whether it be one or the other, what we will remember is the incredible ease of the tires and the sense of security they give to their rider. It is truly mind-blowing to see the entry and cornering speeds allowed by these bikes. It was not good to spend with a sportswoman in the middle of our pack of rabid journalists! The bikers we met, very often on trails, did not use their tires that way. It is therefore a bet that for the average pilot, the safety margin is enormous.. 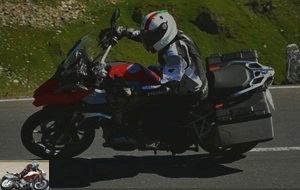 Stand the test of time…. and the track !

At the end of this 700-kilometer ride, often at daggers drawn, the Conti showed no signs of wear or overheating. A good sign for its longevity. It also seems that at BMW, the life of the tire is part of the specifications imposed, because the manufacturer rightly considers that it has to do with heavy rollers who do not have to change tires every 4 morning. We still had to test the behavior of the tires on wet ground, which we hadn’t been able to do in the blazing sun (we’re not going to complain!). 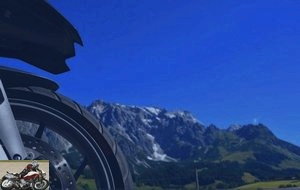 Make circles in the water

We therefore took advantage of a small, watered and perfectly circular track to make a few laps and put an angle in the wet while looking for the stall limit. Pleasant surprise, it seems wide and very far away, that is to say that we can lean the bike copiously before it stalls. The tenor of the category that are the Metzeler Tourance Next and the Dunlop Trailmax 91 in the rain still seem a step above, but, the result is convincing and frankly, of a sufficient level compared to the sensations of a average pilot. The braking distances seem short and the acceleration capacity correct. This brief trial run doesn’t count as an official test, but the feel was there and it was pretty good. At no time did we have the impression of rolling "soap on the edge of a bidet". 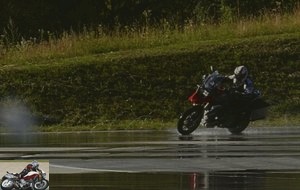 By the way, in this regard, we ended our journey with a few laps on a small educational automobile circuit….

Educational, because it deliberately included slippery areas. Surprised on one of them when I thought I had more grip, I first lost the rear and a lot, then the front, a lot too. ! While I thought I was lost, sliding the two wheels, direction the 3 superimposed safety rails ("shit shit shit") …. The Conti very kindly regained the grip to get me back on the rails, rather than in the rails, very smooth and without "high-side", despite a nice counter steering. Phew, I was very hot ! 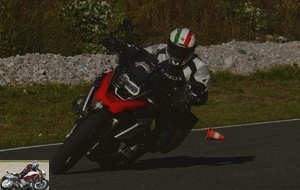 I rode well on a bidet, but not with bar soaps and it saved me the day. I wouldn’t do that every day, but here I really appreciated the gradual nature of dropping out as well as hanging up. Beautiful work as they say. You can trust !