The three-wheeled scooter 1100 euros cheaper than the standard MP3

Piaggio continues to decline its three-wheeled scooter and comes out after the standard MP3 a Yourban version, especially in 300 cm3 at a much more affordable price: 6,099 euros, or 1,100 euros cheaper than its MP3 brother.. So good or bad ? 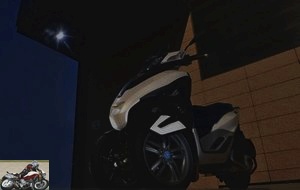 The Yourban has almost only MP3 in name, as it differs from the usual MP3 in its look and in particular by this characteristic frontal tie associated with a grid of the most beautiful effect. More than elegant, it is above all a sportier line that the model offers. For the rest, we are very close to the original MP3, both in terms of the front axle known as LT (for Large Thread), which allows driving this 300 cm3 (278 cm3 to be precise) without a motorcycle license; with a simple car license (and a 7-hour training course). The Yourban 300 also shares the frame and packaging with its little brother 125 cm3, from which it differs in fact only by the engine: 22.4 horsepower against 15 horsepower for the 125. 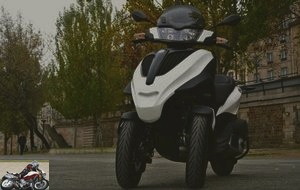 Double front optics framing lights with four LEDs, turn signals outside the grille, short aesthetic bubble, tapered mirrors give the scooter an owl questioning air. We find this nice design at the back with a double light equipped with curved LEDs. It is still on the side where the distinction is less, but where the side vents associated with a two-stage saddle with elegant red stitching (for the Sport version of the test) confirm the excellent workmanship at all. 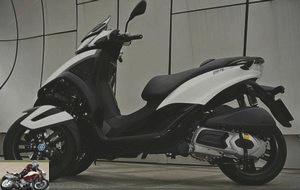 Like many scooters, the saddle rises reasonably high (780mm) but is very wide, hardly leaving the possibility of putting the feet on the ground for the pilot of 1.70m. But its reduced weight compared to the MP3 of the same displacement (-15 kilos), allows it to be taken in hand more easily. The front even feels light compared to usual, with a much easier to handle front end.. 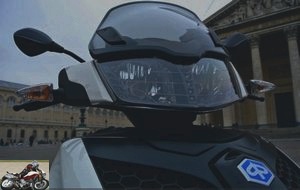 Under the eyes, there is a counter shared with the Beverly: 3 circles embedded in each other allow you to read analogically, speed, fuel gauge and engine temperature. In the center of the speedometer (indicating a 160 km / h claim), there is also some digital information such as the clock, a partial double trip, a totalizer, the outside temperature, the battery voltage and the warning light. gel (below 1 ° C). And we go from one display to another via a "mode" button on the right stalk. A maneuver that is easy to do on a daily basis, even while driving. It is also this same mode button that allows you to reset the partial trip or to set the clock on time (as long as you have previously chosen the mileage indicator). 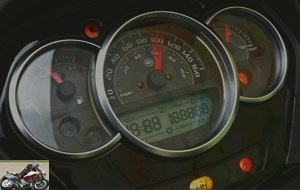 We note at night the display on a bluish background of the whole, very pleasant and above all very visible; both day and night for that matter. 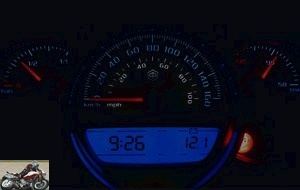 The most attentive will note the existence of an Eco display, which was previously found on the Scarabeo and which is found on the X10. It is not – yet – used on the Yourban; but could be in a future update to believe the constructor.

Speaking of night, the Yourban’s lighting is excellent and sufficient on a low beam road. It gets even better in high beam. A fact rare enough on this type of displacement to be reported.

The position is then more natural than the standard MP3, with legs at 90 ° and knees that do not rise higher. The handlebars then fall more naturally under the hands. And the whole is more pleasant and less tiring to drive on a daily basis.. 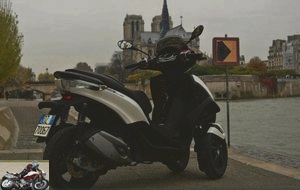 The four-stroke single-cylinder with electronic injection snorts quietly. A safety device also prevents the scooter from leaving alone by turning the right handle without being seated on it (That said, a light weight such as a helmet or a shopping bag is sufficient to deactivate the safety placed under the saddle). The action on the right handle causes an immediate reaction of the scooter which quickly launches to the request and to print faster than its traditional MP3 counterpart, mainly due to its lighter weight. 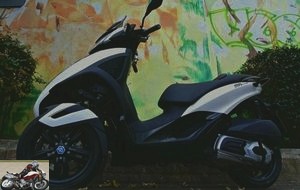 Low-speed maneuvering is also easier with a front axle pulling the driver less. Even the stopping phase is simpler, even without using the wheel lock. Because like all MP3s, the Yourban has this parking aid to immobilize the scooter upright. The manufacturer likes to remind people that this is a parking aid, which should normally only be used when one is no longer seated on the scooter. Except in 99% of cases, all users use it when approaching a red light, so as not to need to dismount. And the technique is easier to implement with the Yourban than with the MP3 whose heavier direction leads to a little more. Result, it is possible gas cut, but scooter on its way, to engage the system (normally only under 5 km / h). 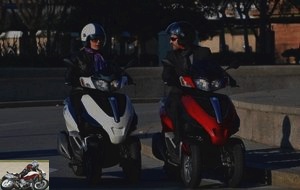 Stop, start, stop. From the red light to the next red light, the Yourban proves nimble and agile, dashing briskly from one traffic light to another. The revivals are lively and dynamic, even if they are less brutal compared to the 500 cm3 of the range, making it possible to quickly reach a speed prohibited in town. The light weight and the compact size also allow you to slip without thinking between cars in traffic. We find the effect more of the featherweight (despite the 212 real kilos that do not feel everyday), with maneuvers at very low speed easier than on the MP3. And the three wheels are here another advantage allowing really slow maneuvers (compared to a two-wheeler) to slip into traffic. 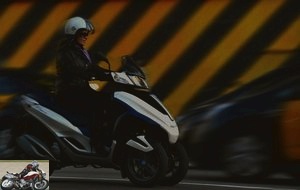 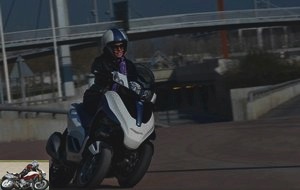 The Yourban quickly reaches 100 km / h then slowly extends to 110 km / h … on the flat. It will be necessary to wait for a descent or a very long straight line to try to make him tickle the 120 km / h, maximum speed, solo. The protection of the screen here is more aesthetic than effective, but sufficient in view of the possible top speed. At this speed, the scooter retains all of its steering and precision qualities, making it possible to consider a long journey at this rate … even if it marks time on a hill; which will make him prefer the departmental.

Back on more buccolic routes, the Yourban finds its marks and especially its versatility to ensure a sustained pace up to 90 km / h. In addition, its exemplary maneuverability ensures a good pace from one turn to another.. 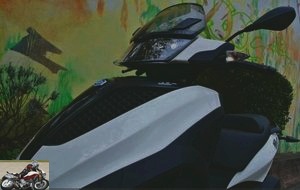 The single disc of the rear brake ensures very good efficiency, allowing quite blocking with then a slight sliding effect and sideways from the rear. Fortunately, the front remains perfectly in line and the three-wheeler is still reassuring here. The front brake is powerful and progressive, even if it is a little soft at the start of the race. You can take it with your full hand and brake hard, without ploing, gouging the front excessively; the attitude of the scooter remaining straight. The feeling is thus very good, without being excellent. In any case, the set of two brakes allows short braking, because largely proportioned to stop the 22 horses. 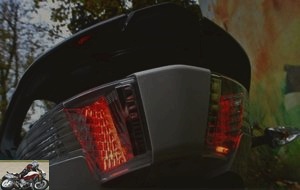 Whether solo or duo, the Yourban confirms the comfort offered by the MP3 family. The defects of the road are relatively well erased and allow not to feel violently like some scooters paved or other holes. Deserved and appreciable comfort both solo and duo.

The passenger benefits from folding footrests which completely disappear into the bodywork. The handles are in this regard well positioned. He may regret the backsplash, which is present on the MP3 version.. 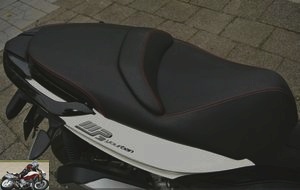 The Yourban offers a relatively precise fuel gauge … The first quarter is displayed at 60 km, half at 125 km, the last quarter at 170 km. And then there are still about 60 kilometers left. And if you do not look at the gauge, a yellow light will tell you that you have arrived on reserve. With a consumption of around 4.6 l / 100 and a tank of 10.8 liters, the Yourban therefore displays an overall range of around 230 km in the city, depending on the pace and a little more on the road at stabilized speed..

The saddle opens from the central contactor. There is no hydraulic lever to lift or hold it, on the other hand, it tilts very well up to the handlebars, allowing you to place anything you want underneath: that is to say a full face helmet. and a bag for example. We would just have dreamed of being able to fit two full-face helmets there, but this is rare in the category. Like most scooters, the trunk has a night light, allowing it to be illuminated and the interior to be clearly distinguished..

We also regret the lack of storage or storage compartment at the front … especially because of the parking brake lever. Parking brake that can be operated easily, both for locking and unlocking and without twisting. 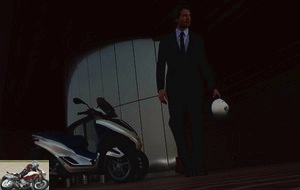 Lighter and more manoeuvrable than a standard MP3, the Yourban will be the preferred choice for urban but also peri-urban use, even if it remains limited in top speed, in particular to be able to overtake on the fast lane. But with an urban and sporty look, a quality finish and an especially cheaper price of more than a thousand euros compared to its brother (6,090 euros against 7,199 euros), it constitutes a real alternative – without renouncing on any point – of more so that it has not yet been as sold as its brother and is therefore not as common, especially in its white livery. It fights above all against fierce competition in the 300 and 400 cm3 range, with often lower prices but without the advantage of three-wheelers, its undeniable asset..